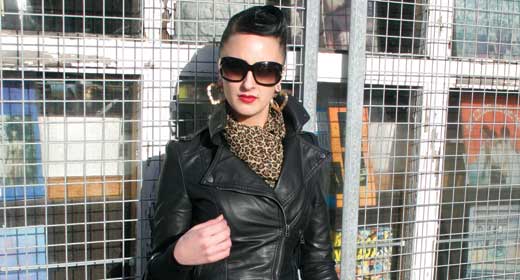 We always ask people about their look and nine times out of ten they say, “Oh, I just kind of mix up some vintage stuff with the high street.”Fair enough, most of us don’t need to translate our clothes into words. So we were taken aback when Amber perfectly described her style as, “punk pin-up meets 80s B-girl with a dash of Pat Butcher” – never missing a beat. Well, that just made our job easier. But how come she’s so self aware?

“I just had to write it on my fashionspace.com page,” she explains. “I have to do this all the time for my course, Fashion Media And Promotion.” Ah, that makes sense.

Sunglasses by Roberto Cavalli
“They’re big and dark, so good for hangovers, but they’re ostentatious as well as being understated, if that makes sense.”

Earrings from Superdrug
“They’re a bit ghetto – I like to mix it up.”

Leather jacket from Miss Selfridge
“It’s classic, I love biker’s jackets. They give an edge.”

Black dress from American Apparel
“It’s a good fit, it’s ethical and it goes with everything.”

Handbag from Barratts
“It looks like a Burberry one but obviously I can’t afford the original.”

Shoes from Office
“I love that they’re a variation on brothel creepers cos I have them as well. They remind me of Dexy’s Midnight Runners or something.”

James Kendall was the co-owner and editor of SOURCE. He’s been a music journalist since 1992 and spent over a decade travelling the globe covering dance music for DJmag. He’s interviewed a range of subjects from Bat For Lashes, Foals and James ‘LCD Soundsystem’ Murphy to Katie Price and the Sugababes. He’s a keen photographer and has work featured in The Guardian.
← PREVIOUS POST
Streets Of Brighton: Margaret Street
NEXT POST →
Source Virgins: Internet Dating