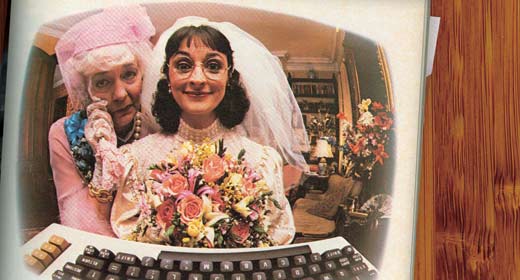 The concept of finding a partner online has exploded in a way unimaginable only a few short years ago. As an increasingly insular society, we’re finding it harder to attract the opposite sex as we spend more time mucking about on Facebook than actually going out and meeting people. When we do go out, where do we meet a meaningful mate? Go to clubs, you just meet women who pick up guys in clubs. So what better way than selecting from an online catalogue – just as with buying music, it’s a much more convenient way of browsing the racks.

I plumped for The Guardian’s dating site. There are literally hundreds of such services to choose from, but theirs allows you to search without creating a profile (many don’t) and I figured someone affiliated with the haughty daily rag might be a bit more up my alley. There were a few likely looking candidates, so I created a profile and I was away. I delved into the online meat market, making instant character judgments based on the profiles like someone kicking tyres at a second-hand car lot.

Ladies who ‘LOL’ – they’re out. Anyone making mention of being ‘Brighton’s own Bridget Jones’ or ‘looking for my own Mr Darcy’, they’re out too. This cuts out quite a large chunk unfortunately. I later worked out that these giggly morons could see who’s viewed them; it’s an idea to search before you log in or they’ll be on you like vultures. So I narrowed the list down to a few quite good -looking types and read a bit further. Wants someone who’s sporty – she’s out. ‘Smoking: no way!’ – no way indeed. Which leaves, shall we call her, Miss X.

Miss X had a pretty decent photo. It’s a shallow world, but she did. My momentary pang of guilt for rejecting possibly quite lovely ladies on the basis of an inch-high picture passed quite quickly. We’re all in the same boat here. So I read up on her. She seemed pretty funny, as far as you can in a couple of paragraphs. So I figured I’d drop her a line. I told her this was all new to me, I’d just been in a nine-year relationship, wasn’t sure how it all worked. Within the hour she’d responded, she had fairly similar circumstances. Miss X suggested we do some emailing, and then work up to chatting on the phone to arrange a date.

So this new and very modern kind of relationship duly commenced. We emailed a couple of times a day, then after a few days of my sparkling wit and pithy commentary on the world at large, she saw fit to give me her mobile number.

I’d not really been holding out any great hopes from this expedition, but found myself extremely nervous about an actual conversation without the benefit of the backspace button. A text! That’s the way to go. I texted her, taking care to include all appropriate apostrophes. I’m kind of a stickler for that. A minute later, my phone rang and there I was, chatting away to someone I’d never met but realised I knew quite lot about. It was a lot more relaxed than I’d thought it would be – the odd awkward pause here and there but after a while she cut to the chase. The date was arranged.

As I entered the bar there was only one obvious candidate for Miss X. It was pretty empty, and only one person sat alone. As she turned around it would be an exaggeration to imagine she’d sent her mother instead. But only a slight one, mind. Miss X had obviously been camera-shy for a good few years. The sultry smile that simmered from the website belied a cracking set of slightly off-brown teeth and as she leaned in for an introductory peck I caught the unconventional perfume aroma of, well, I could only put it down to ‘biscuits’.

Well, in for a penny… The person I’d been chatting to online and on the phone soon emerged and we actually got on pretty well, once I looked past the jarring physical deceit. Everyone’s going to exaggerate a little bit on a profile, but pretending to look what must have been a decade younger than you actually are is only going to end in disappointment somewhere along the line.

We had quite a pleasant evening all in all. Like the big coward I am, I said I’d had a really nice time and I’d be in touch. Then, like a proper journalist is supposed to, I made my excuses and left. We never spoke again.

WAS IT WORTH IT?

If you’re serous about finding love online, it does seem to work for plenty of people. I dare say further attempts might have worked out better, but to be honest it’s not really for me at the moment. Going up to someone, getting talking and asking them out might be daunting but I guess it doesn’t take all that long. Going back to square one with the searches, the emails, the texting, the chatting before you even meet wasn’t something my cynicism would really allow.