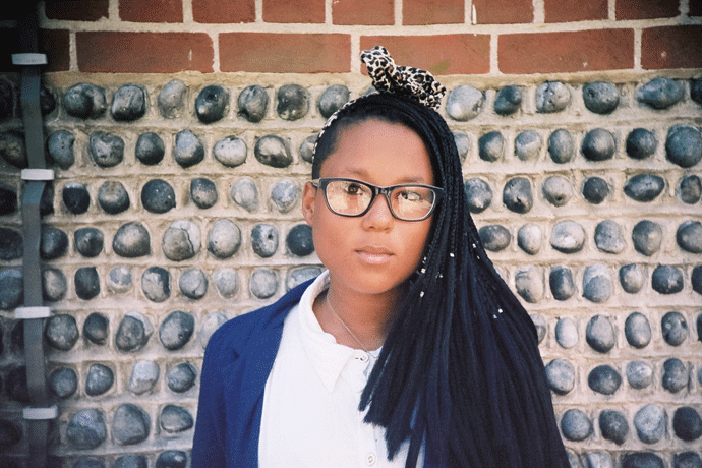 Another month, another young Brightonian spotted for style well beyond their years. Phoebe, who’s just shy of her 15th birthday, caught our eye with her bold use of pattern and colour.
“I think because of the person I am I like things that stand out quite a lot,” she says. “I’m quite an outgoing person and it goes with my personality.”

Not many people would be brave enough to clash stripes, leopard spots and tribal print in one outfit but Phoebe takes on the challenge by mixing in smart basics, like the blazer and shirt. Some of her friends think her look can be a bit “in your face” and she says her stepdad doesn’t really “get it” but, like all of the coolest kids in school, she doesn’t care and instead is just doing her own thing.

Leopard print hair band from Primark
“This is actually my friend’s but I borrowed it from her cos I love patterned stuff.”

Glasses
“These are prescription glasses. I’ve had thick-rimmed ones for about a year now. Before I had some smaller frames, but I prefer these.”

Blazer from Primark
“I like wearing blazers and shirts. I’m not really a girly person, I like games consoles and stuff.”

White shirt from New Look
“I get a lot of stuff from Primark and New Look. I know what I like so I tend to stick to shopping in the same places. I prefer high street to vintage so I tend to follow the mainstream trends but try to put my own quirky spin on it.”

Leggings from Primark
“I’ve got so many patterned leggings and in my friendship group that is sort of my thing. I’ve got two pairs of black and white ones, American flag ones, chain ones…probably enough to wear two pairs every day!”

Trainers from Vans
“I do like my trainers. I think I have a little bit of an obsession.”

Words by Hayley Simpson
Photo by Kevin Meredith at lomokev.com/style