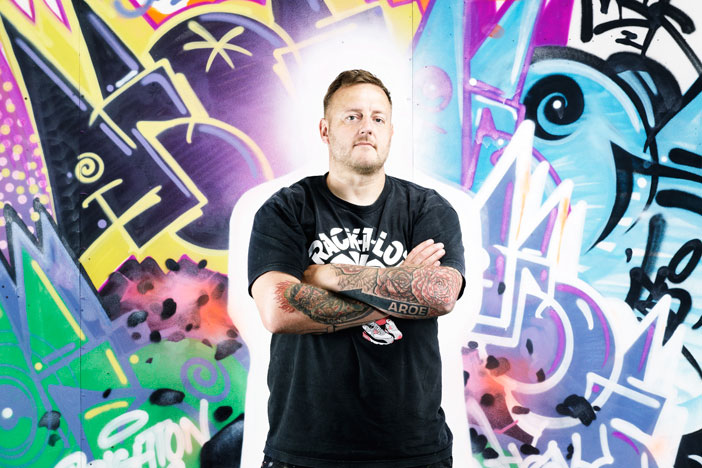 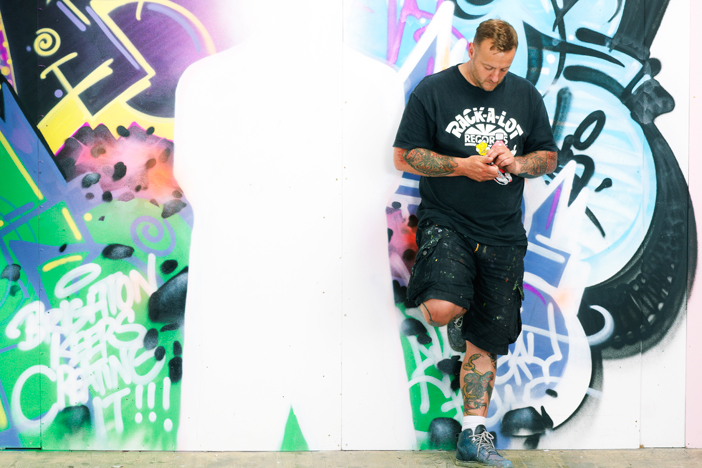 There was a white wall, and then 20 minutes later there was nine foot square piece of art. That’s all it took when Aroe painted the background of the SOURCE cover. Reaching into his stripped-down box of paint – he normally has a car boot full – he dove at the wall with astounding confidence, laying down big blocks of colour in seconds, the lines flowing straight from his brain to the wall, no sketches, no projectors and certainly no stencils.

Still, he’s been doing it for a very long time now, since the early 80s, and nine foot square is like a doodle to the man who painted two-storey AT-ATs across Buxtons, and turned the previously drab Kensington Street into the most colourful back alley in England, watched over by a benevolent 30 foot James Brown.

Scale is Aroe’s trademark, you see – big productions, ambition. As part of MSK, arguably the best graffiti crew in the world, he’s known for breathtaking pieces you can almost see from space. Most recently he’s captured the imagination of Brightonians, graffiti obsessives and hip hop fans with his immense re-creation of the cover of ‘Licensed To Ill’ as a tribute to recently-deceased Beastie Boy, MCA. So we’re pretty excited to see him paint something exclusively for SOURCE.

“Oh, that was just something stupid thing, throwaway graffiti,” he says before giving us a crash course in bubble-lettered throw-ups and other parts of graffiti culture. “This throw-up art is an element of graffiti, and I don’t really love it cos it’s attached more to the destructive side. But I think that there’s a lot of beauty in something so simple.”

The fast talking writer prides himself in being able to handle all aspects of the artform and reckons that if you’ve got a good throw-up it says a lot about the writer. If you ain’t got no letter-form, the most amazing wall paintings mean nothing. And he would know about amazing wall paintings. That AT-AT piece took 50 hours to do, all drawn freehand with aerosols.

“I might have a reference picture to look at but I would never, ever dream of using a stencil,” he says. “I would never, ever use a projector. I want what I do to be the painting. I don’t see that there’s any real skill in copying something. To spray through a piece of cardboard is just weak.”

So called “street art” is a rant that Aroe is happy to get onto. When we admit to him we might make some schoolboy errors being outside the graff scene he says, “As long as you know the difference between graffiti and street art we’re gonna get on just fine.” He’s an imposing fella, brash and clearly quite fearless. Tales of him pulling the emergency cord on a Madrid train then painting it while it was stopped in a tunnel prove he’s no scaredy cat. But he’s also very funny, and keen to show he’s a normal family man who stays firmly on the right side of the law in the UK.

“I’m not a nasty person,” he stresses. “I own my own home, I’ve got kids, I’m a respectable member of society. But I don’t personally think graffiti hurts people. People attach far too much emotion to it. People say, ‘Oh, they’ve victimised me!’ No, what’s happened is that you’ve moved into a house which is in a good place where people wanna write. It’s the same as when people have a survey and it says the house is prone to damp. They should say, ‘The back of your house is next to the train line – it’s prone to graffiti.’”

He still paints trains. Not only does he enjoy it but he feels he needs to do it in order to maintain the integrity of being an all round graffiti artist. But he paints them on the continent where you’re more likely to get a €50 fine than be banged up. His clean nose has helped him build a relationship with the council that has meant he’s able to paint huge pieces without looking over his shoulder.

“Sarah Leach at the council is the most incredible woman. Every person in Brighton should thank her for what happened on Kensington Street,” he says. “I put the idea to her and she had the courage to say to the council, ‘I’m going to take this chunk of money and take this risk.’”

Aroe says that it’s thanks to her that certain sites are deemed graffiti-friendly and everywhere else stays paint free, bar the odd tag.

“There’ll always be tagging, just like there’ll always be litter,” says Aroe. “And, yes, I have had my house written on. It didn’t piss me off – I just got the white paint out and painted over it.”

The sensible attitude of the council isn’t the only thing the Brighton scene has got going for it. The older writers have mentored a lot of the younger guys so they have respect for how things work. You don’t tag a proper painting or do a throw up over it – if you paint over one you have to create something better.

“There’s always been a progressive and productive scene here,” Aroe explains. “Brighton is now known as a place for pushing and inventing new stuff. It’s a respected city. I meet writers in America that I really respect and they say they check the web for new Brighton graffiti every day. They look to what’s happening in Brighton to inspire them. Any success I have I would credit to this city.”

Some of those Americans that have been keeping an eye on us are MSK, who invited Aroe to join them, a surprise that he describes as being akin to the 60s-era Rolling Stones asking you to play. His other crew is Heavy Artillery – a group that started locally but is now Europe-wide.

“It’s funny to be in MSK and Heavy Artillery because they’re two brilliant crews in my opinion,” he beams. “To be in both of them is double fluky.”

He’s being modest because what got him in such exalted company is not just his skills but his commitment to pushing things forward. The reason he hates street art so much is that it’s too easy – he says most street artists are failed graffiti artists. But he could be about to take on the likes of Banksy (a name Aroe won’t even let pass his lips) on his own set of rules. He’s got a huge, currently top secret, exhibition lined up which may kick off in New York. His work for that might mean we don’t see as many pieces around town for a while. But with the Beastie Boys piece costing him £150 in paint alone (and 13 hours of his time) that seems fair enough.

“I’m happy to do these paintings and give them to the people of Brighton as a compensation for the tags,” he says.

The tags seem a very small price to pay now.

James Kendall was the co-owner and editor of SOURCE. He’s been a music journalist since 1992 and spent over a decade travelling the globe covering dance music for DJmag. He’s interviewed a range of subjects from Bat For Lashes, Foals and James ‘LCD Soundsystem’ Murphy to Katie Price and the Sugababes. He’s a keen photographer and has work featured in The Guardian.
← PREVIOUS POST
Spectrum, Weds 15th
NEXT POST →
Pictureplane, Mon 13th Aug
Mailing List
Recent Posts
Website developed in Brighton by Infobo
Copyright © Brighton Source 2009-2020
Aroe Interview - Brighton Source