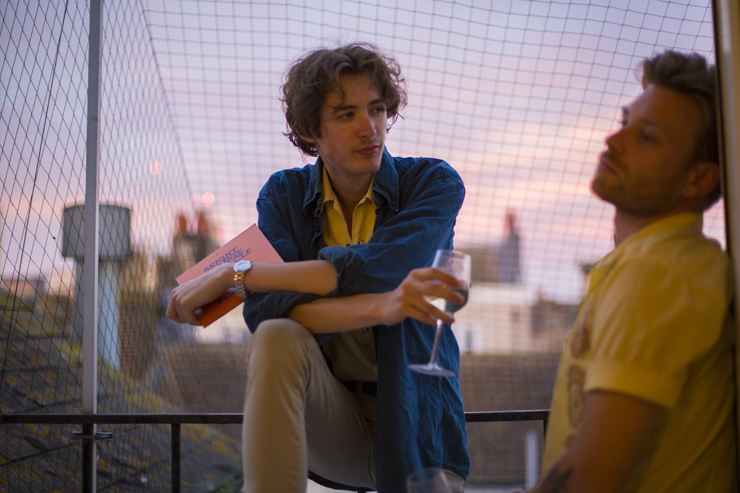 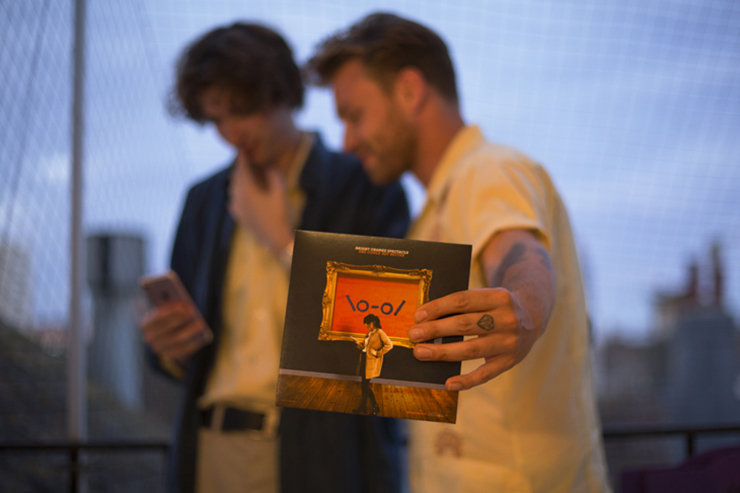 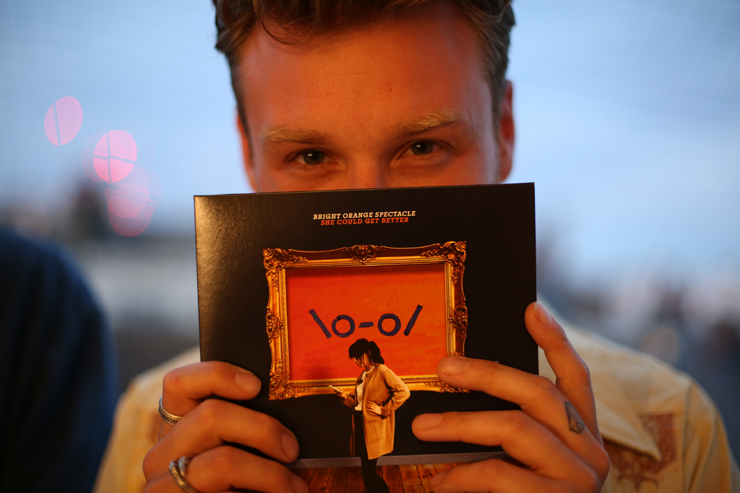 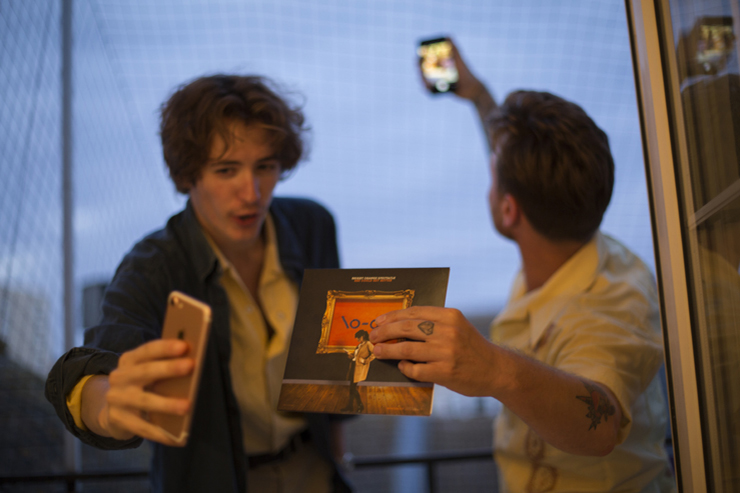 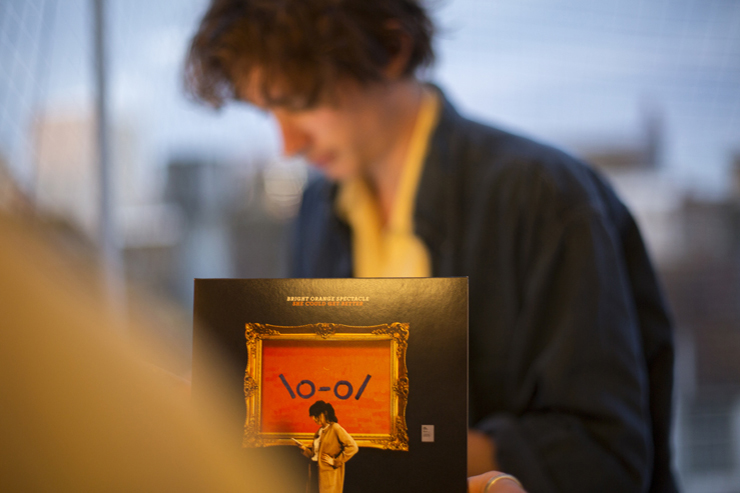 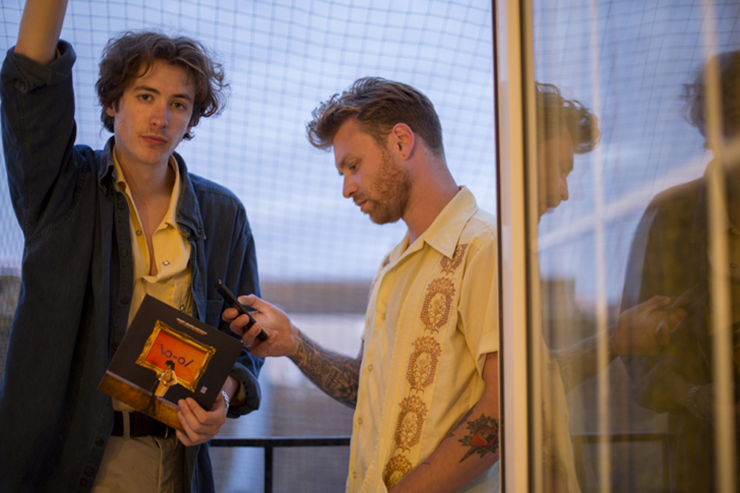 When we first heard the debut tune from Bright Orange Spectacle, we were intrigued by how at odds ‘She Could Get Better’ was from everything else we were listening to. It’s a sign of a good record when, on first listen, it leaves you feeling wrongfooted, only to then build into an unshakeable earworm.

On a quest to explore the musical gems of Brighton, SOURCE met up with Charlie Sinclair and Jack Fletcher from the band to dig a little deeper.

Bright Orange Spectacle are fronted and driven by the songwriting, passion and production of Charlie Sinclair. We discover pop sensibilities and production masterclasses that seem far removed from most new music we hear coming out from Brighton.

‘She Could Get Better’ has just had its release on a sleek looking vinyl (artwork from the talented Josh Fletcher), and it’s clearly a great feeling for Jack and Charlie. So clear, in fact, that we indulge in a Bros-esque photoshoot with the 7” in hand, as we talked over the record in the Kemptown house from whence it came.

“When you’re producing a track with so many layers in it, you’ve really got to look out for space. Our producer, Ed Ripley, was a big fan of adding everything in and then removing it. We cut about 50% of it – we had clarinet in it, and then decided it wasn’t needed.”

“We had five final versions, so as this was our first song, choosing the final cut was akin to deciding ‘right, what type of band do we want to be?’.”

We love the strings, they seem integral to this song…

“It sounds like there’s an orchestra playing on it, but there’s not! I always knew strings would be a large part of the song when I was writing it, yet they were one of the last elements to make it onto the record. Even though they were a late edition, the song had developed with space for strings in mind.”

“For one of our first gigs, we had it booked in and I decided I wanted strings two days before the show. The guys [in the band] were like ‘it’s way too late for that’, but I stayed up all night writing string parts and the next day posted on Facebook to see if anyone could play cello. And a friend of mine said ‘I know a great cellist actually’.”

“I got in touch, and it sounded ludicrous – ‘come down, stay over and we’ll learn it tonight for the show tomorrow’. But she’s a nutty artist like the rest of us and was up for it.” So how does it all translate live?

“Well at the moment we do play as a straight guitar band – it’s rawer, it’s punkier than the record. And as we’re starting out, there’s only so many people who can fit on a stage. We toyed with the idea of backing tracks [to reflect the number of layers on the record] but we didn’t want to replicate the record – people can hear that at home.”

“We’ve gone from being a solo project for a year to a band, so it’s new, we’re adapting.”

“In terms of ambition, the sky’s the limit. We’d love a string section, a brass section, two keyboard players, another percussion player… not for show, but because there are so many layers in the music.”

“I’m not a fan of backing track culture. We approach recording in the studio in the most modern way we can, but approach live music in the most old-fashioned way we can.”

“It’s completely self-indulgent. I love playing this live because it doesn’t sound like anyone else.”

And it’s true. It’s hard to deny that the glam rock thuds of Bowie, Elton-esque keys and nod to Father John Misty in the vocals get under your skin. Even if you have a limited appetite for anything glam, or in fact pop (as per this particular SOURCE writer’s tastes), the songwriting and musicianship shine through. Therein lies the charm – it’s surprisingly off-kilter with current trends. 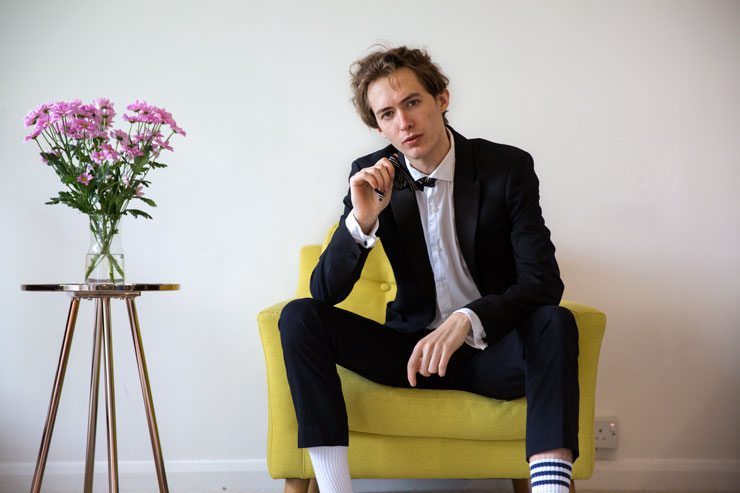 What are the band dynamics?

“In the studio sense, I can be quite quiet. I struggle to get truly creative when too many eyes are on me. I like just sitting in my bedroom making weird stuff. 4am, when you’re on your own, that’s when the magic happens. But I’ll bring ideas and songs back and everyone has input, they can be brutally honest and that’s the dynamic we thrive on. Everyone in the band is a fantastic musician in their own right.”

Charlie’s Guernsey roots are reflected in the make up of the band – Jack Fletcher (“percussion, harmonica, musical wingman”), George Le Page (“a phenomenal drummer who can pick up anything”), and Matt Berry (“He somehow sounds like he’s playing in The Doors & The Smiths at the same time – lush layers of delay and reverb”) all came from the embers of ‘Of Empires’. Rooney Durrant is the final piece of the puzzle (“bass and amazing harmonies”).

So what can we expect next?

“You have no idea how poppy it’s going to get,” grins Charlie. While we are talking we uncover a mutual love for Swedish post-punk band Viagra Boys, but a sneak listen to the upcoming demos and it’s clear that the love of a pop hook and multi-layered songwriting transcends.

“We could definitely tour with HAIM. Or Miley Cirus,” says percussionist and brother-in-arms, Jack Fletcher. Country vibes shine through one of the other demos we listen to, reminding us of jangly Vampire Weekend. It points to a future that is still shifting as it is being developed. But if the first record is anything to go by, we look forward to seeing what’s up next…

Find out more about Bright Orange Spectacle on their Facebook page, or buy the vinyl from Whatabout Records.