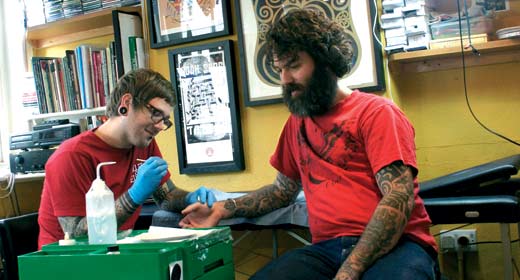 “It’s about trying to create an environment that is unique to tattooing,” says Jason as Adam tattoos his already heavily inked hand. “It should be interesting, a cool place to hang out. People email us to say they’ve had a brilliant experience. There’re people being worked on in the same room, a lot of on-the-day spontaneous creativity, and pressure on the tattooists to create good work. That’s the challenge of tattooing.”

Alongside its 15-year-old London parent shop, Into You is well known for it’s big, bold custom work, and mixing up styles. The work has got a bit of an edge that most other tattoo parlours haven’t got. There’s a more hardcore approach – they want to tattoo areas that others avoid. Although ink connoisseurs flock to the place, Jason – who works alongside co-owner Alex Binnie, Woody, Jim Macairt, and Paula Converse – also says the shop is a good place to come for a first tattoo.

“We’ve got loads of experience, put people at their ease and the tattoo is going to be good,” he says. “People often go too small with a first tattoo and that’s stuff that we won’t let happen.”

Jason Mosseri (with beard): Machine tattooist and co-owner. “I gravitate towards bigger custom work with a fusion of styles.”

Alex Binnie print. “He co-owns the shop and probably screenprints more than he tattoos now. He’s got a show at Ink_d starting March 6th,” says Jason.

Adam Sage screenprint. “It’s my first- I wanted people to be able to take some of my artwork away even if they weren’t getting tattooed.”

Jason Mosseri drawing. “When I get time I do a drawing in this series. They take forever.”

Books. “There are hundreds of books in the studio. Every theme is appropriate for tattoos,” says Jason

Stereo. “We play music all day. It’s part of the experience so we try and make it a bit mad,” says Jason.

Sometimes an article is a bit of a team effort, and those are tagged SOURCE Writers. If you’d like to be part of that team, hit the Contact link at the top and get your work on this website.
← PREVIOUS POST
Critic: Music Reviews March 2008
NEXT POST →
Street Style: Jack
Mailing List
Recent Posts
Website developed in Brighton by Infobo
Copyright © Brighton Source 2009-2020
Consume: Into You - Brighton Source