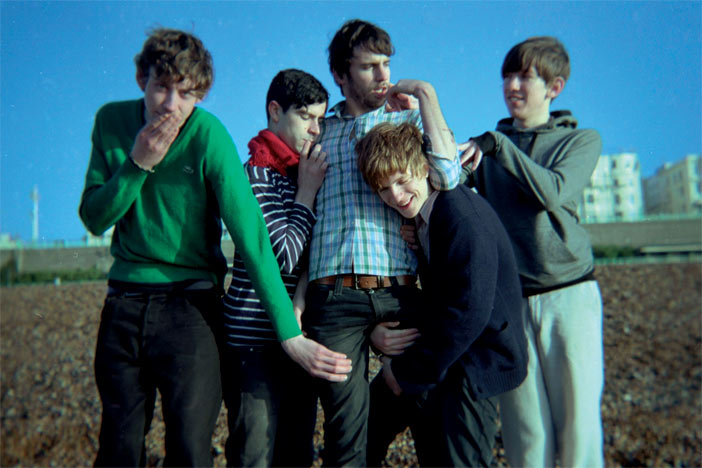 As soon as the first spidery guitar line crawled out the speakers we knew we were in love. That pounding techno-tough kick drum cemented it, and when the five members of Brighton’s secret best new band dived into their spaghetti-limbed dancing – instruments tight on their chests like Mark King in an electrifying cloning accident – our legs started to swoon in the same way. Almost subconsciously we were throwing shapes right back at them, with the sound of Hummer’s sharp metallic guitar riffs shooting out the Audio speakers – topped off with laser beam synths – it looked like we were all trying to dodge the shards. This was clearly no ordinary band, how come we didn’t know about them already?

The truth is that now we’ve grabbed them and aren’t letting go, they’re ours. But city residents Foals haven’t made much impression on Brighton cos in the six months since they moved here from their former Oxford paddock, they’ve been on a constant touring mobius loop. That’s something that’s not going to change much if the reaction to their trio of live appearances at the Great Escape are anything to go by. The packed crowds lapped up their intricate minimal electro-tinged guitar lines, relentless beats and explosions of melody, whether it was 3pm or 2am. Their late-night energy comes right from the heart of partying.

“A lot of our friends were having house parties and putting on club nights playing a lot of minimal techno and electro records,” says Yannis when we drag him into the local band hangout Heart & Hand for the first time.

A few performances at these parties, a cheap demo and a blag onto Truck Festival and Transgressive Records came knocking. The whole journey started just twelve months ago, so God knows where they’re heading.

“It’s great that we’ve got so much attention already,” says Yannis with his cut to the chase intensity, “But if we’d have been able to have it at our own pace, we’d have liked a bit longer to mature. We’re still playing our very first songs and we haven’t had a chance to write more, cos we’re always on tour.” One thing they’ve maintained the time for is the house parties, where they’ve nailed the relentlessness of their live sound. In between the many gigs, they’ll put out a myspace bulletin and find another secret place to drag their amps, in the wee hours.

“We played a squat in Elephant & Castle – there’s a photo of it on our myspace – and this entire wall got hit through with a fire extinguisher,” Yannis remembers with a smile. “There was a whole wall and a doorway into the basement where we were playing when we started. By the time we finished our set there was just a beam and rumble, and ketamine and squat juice. That was pretty exciting.”

Foals might like to play with the walls literally removed between them and the audience but Yannis also likes these house parties – and inviting the fans on stage for proper gigs – as they remove the metaphorical barriers around the band, the way that the hardcore punks would. At the Camden Crawl 60 kids shared the stage with the group.

With all those complex layers of melody it’s a surprise that they could tolerate a nudge against their musicianship. Is that extreme musicality something they work at? Yannis says not – they never make things more complicated for the sake of it. But it’s a dangerous game to play, being talented at your instrument – just look what happened to prog rock.

“Dangerous? No,” he says sternly, “because we have a modicum of taste. There are some amazing prog records and there are some terrible fucking punk records. Predominately we like communicating with people.

“The problem with overly skilled musicians is that they disappear up their own arse. Actually, we’re not that good. We couldn’t show off if we wanted to.” The band are undeniably as bloody hip as a pensioner’s hospital appointment, but one of Yannis’ biggest frustrations is the company that the band keep on the magazine pages that celebrate them. Spending more time in front of the mirror than behind your guitar ought to be a sackable offence.

“I’m not interested in bands that look good and can’t play their instruments,” he says earnestly. “That’s not what music is about. We feel quite a long way from home because we play on bills with these very chiselled bands that are shocking in my opinion. Like “You guys can play your instruments, sweet!” What the fuck? – we’re a band, we’re meant to be able to do that. I like things being simple but I want to be able to choose, not to be forced to be simple by ineptitude.”

The band reckon they don’t listen to rock music any more, becoming increasingly disappointed with the power of the NME and the idea that they can create bands. Instead of the ever-tiring pursuit of “new music” they turn to afrobeat, minimal classical music like Terry Reilly and Lamonte Young, the previously mentioned techno and even Nelly Furtado.

“We want to try and make a band that can, in some sort of way, rehash a disparate set of influences without being reducible to some sort of rock equation,” Yannis claims loftily.

“That’s why bits of journalism have riled us so much. I find it very debasing. Some things that we’ve read, I’ve found very lazy in who they compare us to.” He’s talking here about The Rapture, but to deny any comparisons – at least on fairly superficial levels – is to make the band even more difficult to pin down. The angular guitars are shared, as is a love of techno, analogue synths and screamed vocals. But Foals revel in the sheer complication of their foot-on-the- floor grooves. And it’s worth noting that what we’ve heard in their first nine months of gigging is exactly that – their first bash at live material. Foals promise that their debut album, to be produced by TV On The Radio’s David Sitek, will sound nothing like their gigs.

“I don’t know what it’s going to be like,” he admits, “But I just know it won’t be anything like us live. We’re not going in with James Ford and recording our songs live, we don’t think that’s what making a record is. The aim of playing live was to do something quite visceral and unrelenting.”

It really makes Yannis laugh when people say that all their songs sound the same, (“it’s all bang-bang-bang, there’s no dips,”). That was an entirely intentional thing, a careful, deliberate aim to keep momentum.

“It’s banging all the way through and I wouldn’t want to hear that as an album. It’s not a live document.”

Yannis’ other confusion about the perception of the band comes when people say Foals are a rhythmic band. For him it’s always been about the melody – and ever since drummer Jack and he left math rock extremists The Edmund Fitzgerald, the freaked out time signatures have been left alone. That scientific approach hasn’t been entirely forgotten though.

“It’s always surprised me when bands are asked what their influences are and they answer with three other bands,” Yannis says. “There are so many other things in life to appreciate – and in my opinion – are a lot more important than music. Mathematics and… Not to get into some poncy discussion but people have been to the moon – that’s something that’s impressive. Not other bands. I think drugs are interesting and I think tennis is interesting and mathematical structures are usually extremely interesting.”

And Foals, Foals are very interesting indeed. A foot on the floor dance band who embrace the humanity of live instruments. A party outfit who’d rather talk about science. A group driven by minimal techno beats who’s focus is melody. The hipsters favourite who hate hipster bands. We could be talking about these guys for years, if we weren’t so busy dancing.

James Kendall was the co-owner and editor of SOURCE. He’s been a music journalist since 1992 and spent over a decade travelling the globe covering dance music for DJmag. He’s interviewed a range of subjects from Bat For Lashes, Foals and James ‘LCD Soundsystem’ Murphy to Katie Price and the Sugababes. He’s a keen photographer and has work featured in The Guardian.
← PREVIOUS POST
Metronomy Interview
NEXT POST →
Rounder All Time Top 40
Mailing List
Recent Posts
Website developed in Brighton by Infobo
Copyright © Brighton Source 2009-2020
Foals Interview - Brighton Source