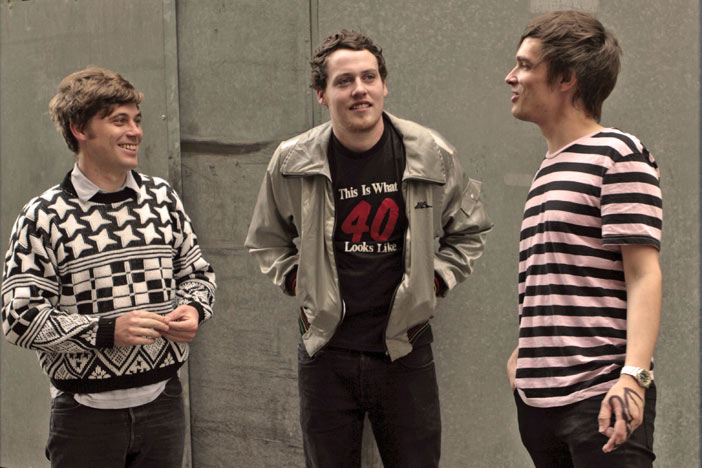 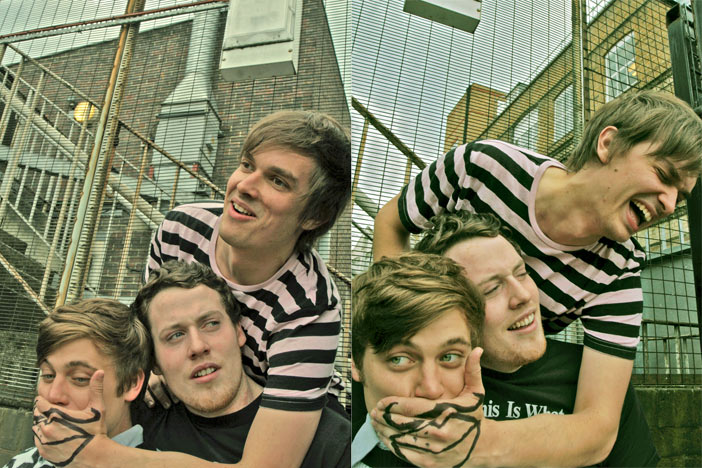 Editor’s note: since this interview in 2007 Metromony had a change of line-up, a change of musical style, a change of working methods and, well, huge success. The embedded tracks are mainly from after the interview took place.

Jesus, everyone takes everything so seriously. As if the po-face rock posturing of indie bands wasn’t bad enough, dance acts “checking their emails” (as it’s become known) on stage makes us wonder if anyone is having fun performing these days. Actually, that’s not true – we know that the Metronomy live band have a riot, as they drag their gear up and down the country, packed into a Nissan Micra.

We know that because, while they’re up there, the trio laugh, smile and perform synchronised dance routines involving lights strapped to their chests. If it all sounds a bit ramshackle, like Cliff Richard’s “Let’s do the show right here!” that’s probably cos it is. There was no money to do “anything proper” so Joseph Mount enlisted his cousin Oscar and former bandmate in The Customers, Gabriel and tried to make as much of a show as they could, with as little finance.

“We were trying to do it so it’s not your average electronic thing and so that we could enjoy it ourselves,” Joe explains. “Oscar, who plays keyboards, happens to be the best dancer in Brighton, so he was employed as a keyboard player and choreographer.” Joe admits that people either find it really enjoyable or absolutely hate it, to the point that they can’t bare to watch it. Which, he says, is fair enough. The community’s reaction on Youtube to a typical performance, for example, of Are Mum’s Mates (keywords: Metronomy, Halloween) says it all.
“Can someone stop them?” exclaims Jumpinjp “Please stop them. It’s cunts like this that give dance a bad name!”
“If you want serious IDM, then Aphex Twin would like a word with you,” shrugs Wuzzlevideos in response. “Metronomy are fun. Lots of fun. I listen because the songs make me happy.”

We’re firmly with Wuzzlevideos on this one and SOURCE would suggest that if you have any interest in concepts like fun, joy or silliness that you check Metronomy out at this month’s excellent Loop festival.
The dancer troupe that caused such a stir at the O2 Wireless festival will be back, with what Joe calls “Some very nice synchronised work.” Even if you don’t like fun you could stand back and listen to the music.
“I hope that people who come to see us would get that there’s a line between the music and the show,” Joe says. “Us making a bit of an entertaining show doesn’t mean that the music is a joke. The two can work together.”

Ah, the music. It would be misleading to portray it as the opposite of the live show visuals – in a way it is a little naïve and silly – but it’s certainly no joke. Milkman-whistling riffs are made from abrasive sounds with indie and electro elements put together in a way that no one is doing. Once you’ve heard one Metronomy song (and they are songs – they frequently have vocals now) you’ll probably recognise the next, although it will sound very different. If that description sounds elusive that’s probably because the music is too.

It certainly refuses to be pigeon-holed. “I don’t really think about music in terms of genre,” says Joe, “I think it’s counter-productive if you just try and make one kind of music. But I guess my stuff is like indie dance. It’s funny, because of what’s going on at the moment and what it coincided with. When the NME did that new rave piece it was mentioned in that. It’s not! What’s new rave anyway?”

Mind you, that’s not to say it’s out of its time either. Metronomy fits with how people are being more inventive by using loads of different elements together. That randomness is tied together by the way Joe tries to make all of his tracks a bit dancey.

A visit to Last.fm suggests that people who like Metromony also like Simian Mobile Disco (“Great!” Joe says sarcastically), New Young Pony Club (“Oh, amazing!”), MSTRKRFT (“Erm…”) and the Teenagers (“OK, well that one’s not too bad,” he eventually concedes).
“The thing about Last.fm is there’s only a couple of songs that get loads of plays,” considers Joe. “’You Could Easily Have Me’ has become a bit connected to that scene, but I don’t see any similarity. Especially to acts like New Young Pony Club!”

Although Joe has been making Metronomy stuff for years, he was first known around Brighton as the drummer of intense, overlooked indie outfit The Customers – though they’re one of many groups he’s thumped tubs for. They’re inactive at the moment – although Joe says they never actually split – but what did he learn from the experience of being in bands?

“That it’s easier being on your own that being in a band!” he laughs. “Cos when I’ve been in bands I’ve been the drummer and you don’t really get listened to in the same way.”

He says that The Customers were like three or four different bands in one, and that they had different ideas about how they wanted it to progress: “If you want to make a real go of it, you have to be in one of those bands where everyone’s on the same wavelength, or you need someone who is going to kick everyone else around. Which is what I’ve ended up doing [laughs] but that’s working out fine.”

What finally dragged Joe away from sitting at the back holding the sticks was the number of remixes that started to come his way. While there hasn’t been an album of Metronomy’s own material this year, there have been 16 remixes with his name on.
These include an excellent, gentle take on Charlotte Gainsborough’s 5:55.

“In terms of remixing, people weren’t doing anything that was particularly adventurous,” recalls Joe. “I used to really love the remixes that Cornelius did. Obviously there was money changing hands but you could still tell that he was getting something out of it. So I’m trying to come at it from that point of view, really.”

There will be a new album soon, and another before the live musicians join and the trio become a proper band, both studio and live (“I feel a bit guilty about it,” Joe admits). Until then, let’s hope Jumpinjp’s dumb call-to-arms fails.

Ignore the boring moaners and see Metronomy live. You could easily have fun.

James Kendall was the co-owner and editor of SOURCE. He’s been a music journalist since 1992 and spent over a decade travelling the globe covering dance music for DJmag. He’s interviewed a range of subjects from Bat For Lashes, Foals and James ‘LCD Soundsystem’ Murphy to Katie Price and the Sugababes. He’s a keen photographer and has work featured in The Guardian.
← PREVIOUS POST
British Sea Power Interview
NEXT POST →
Foals Interview
Mailing List
Recent Posts
Website developed in Brighton by Infobo
Copyright © Brighton Source 2009-2020
Metronomy Interview - Brighton Source