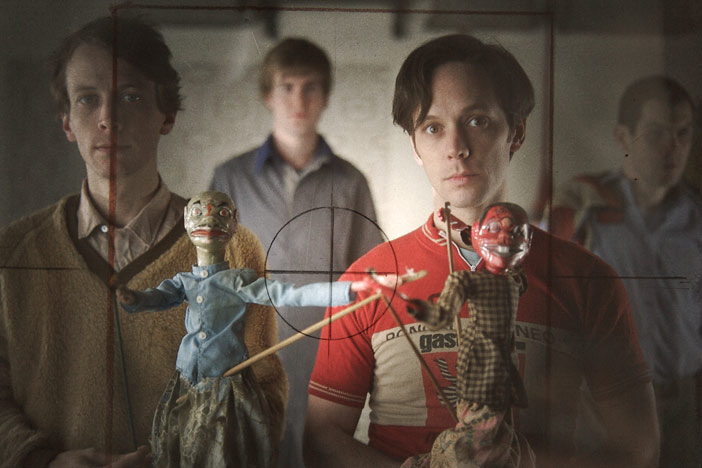 Brighton’s most offbeat indie superstars come back with an easy going epic about the apocalypse. Guess that’s what happens to Englishmen on a worldwide adventure.

When British Sea Power ask Do You Like Rock Music? they aren’t interested how many Bon Jovi records you’ve got. Things are either ‘rock’ or ‘not rock’ in their world, depending on, well, if they’re any good or not. So Simon & Garfunkel are rock, but Whitesnake aren’t. Stubbing your toe getting out of bed to answer the door isn’t rock, but opening that door to a Kylie that needs warming up definitely is.
“To us it’s anything that’s good, life enhancing,” says singer Yan of the new album title over coffee in the Barley Mow. ”It’s stuff that makes you forget about the little things in life.”
“It’s started off with a drunken game and ended up with us doing it on the radio with Stuart Maconie and Mark Radcliffe,” admits bassist Hamilton without a lot of enthusiasm.
“A certain sort of person loves that sort of thing…I’m not one of those people,” adds Yan. “I get bored of it. It seemed like a good idea, I’m not sure if it is now.”

Erm, right. They’re not your usual band, BSP. You can forget the fighting for the dictaphone, or the limelight, here. At one point Hamilton mumbles that he doesn’t really like to talk. We’re not sure if he’s joking or not. In fact the pair are so dry, we’re not sure where the jokes start and end, or what excites them. Their lack of relish for the pub game that’s marketing their album across radio and the internet isn’t moaning, it’s just wry bemusement. BSP are a bunch of English gents that don’t see why the world needs to be the way it is, which might explain the literary and natural obsessions. But lack of banter doesn’t matter a bit when they’ve produced their most accessible album yet. Brilliantly epic, it blends a fair amount of the scope of their debut The Decline Of… with the songs of Open Season.
“Our first album was a bit wild and not to be listened to while riding a bike,” BSP guitarist Noble has explained. “The second one you could play all the way through without falling off. This one is car or a tank – a wind-powered car or tank, but still faster than all the other cars or tanks”.

We can’t do much better than that, except to say that British Sea Power are the kindling that started the Arcade Fire. After discovering Rock Music? to be such an easy listen, it’s been a battle in our mind as to whether BSP have mellowed or the rest of the world has caught up.
Lyrically it’s also the most facinating of the trio, especially on Waving Flags’ exploration of eastern European migration. When we ask what the rest of the album is about Yan smiles and deadpans “The coming of the apocalypse.”
“There’s quite a lot of stories in there from the news at the time we were making the record but with personal funny tales on top,” he continues. “I don’t think what they’re about until they’re finished and people ask me about them. Then I just make stuff up.”
So has the LP still got a concern for nature?
“The album is not without some optimism but it’s all fucked up, isn’t it?” he laughs.
It’s not just an interesting listen, the production has quite a tale to it too. Drafting in a trio of left-of-centre knob-twiddlers – ex-Arcade Fire drummer Howard Bilerman, Godspeed You! Black Emperor’s Efrim Menuck, and Bark Psychosis’  Graham Sutton – British Sea Power set sail for climes anew. Czech forests, Canadian bunkers and Fort Tregantle all gave a new excitement to recording.

“We just wanted to have an adventure,” explains Hamilton. “It’s hard to have a good adventure in England because it’s so familiar.”

More escapades saw the band play at the highest pub in Britain.
“That was a strange place,” Yan recalls, “right in the middle of nowhere. If it hadn’t been such good fun we could have felt that it could go American Werewolf In London at any point.”
Our local oddity was in a café at Saltdean, a venue picked for its sea views. Unfortunately the band played in winter and it was dark by the time they took to the stage.
“It could have been anywhere,” smiles Hamilton wryly. “It wasn’t one of our best gigs.”
There seems to be more of a focus on the music since drum-banging Eamon left to concentrate on Brakes – gone are the onstage trees and dancing bears, replaced with more sedate flag waving.
“Eamon was a distraction, definitely,” says Yan so dryly we’re not sure quite where the joke ends and the truth starts. “He was brilliant with his drum in the audience but he’s a good singer and he had to go. I think he’ll come back unless he gets some money soon. We’ve got Phil The Wandering Horn now. He’s not a replacement, but he does have the random factor.”

But what do the band think of their most critically aclaimed album yet?
“I haven’t listened to it,” Yan says. “I just haven’t got round to it. I’ve had a lot on. I wouldn’t listen to the others – they remind me of problems. Whereas this one I think I’d quite enjoy it.”
Us too, it’s rock music – pure rock music – if you know what we mean.

James Kendall was the co-owner and editor of SOURCE. He’s been a music journalist since 1992 and spent over a decade travelling the globe covering dance music for DJmag. He’s interviewed a range of subjects from Bat For Lashes, Foals and James ‘LCD Soundsystem’ Murphy to Katie Price and the Sugababes. He’s a keen photographer and has work featured in The Guardian.
← PREVIOUS POST
Cassetteboy Interview
NEXT POST →
Metronomy Interview
Mailing List
Recent Posts
Website developed in Brighton by Infobo
Copyright © Brighton Source 2009-2020
British Sea Power Interview - Brighton Source