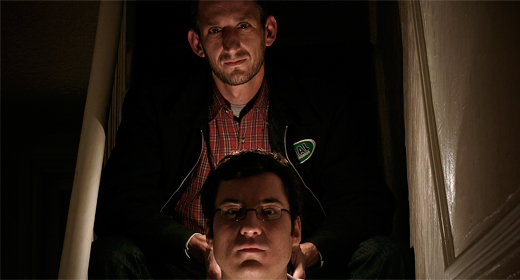 Brighton drum’n’bass has never suffered the fickle peaks and troughs of national taste-change, so sometimes it’s left to the nights themselves to call temporary time. Carbon pioneers Voytek and Insight share their wisdom on the d’n’b scene, the philosophy of Ronseal and Simon Cowell.

Where did Carbon go?
Voytek: We needed a summer holiday; we’ve been doing it every month for five years now so it was high time for a break. Plus we wanted people to appreciate Carbon rather than take it for granted as a permanent fixture in Brighton’s d’n’b calendar.
Insight: Summer’s the best time for a break because there’s a severe lack of students. Plus we wanted to appreciate it again, after doing it for so long it can start to drag and you can forget why you started so after a short and rest up we’re ready to roll again.

Why the Volks?
V: Well, we started off at the Pressure Point, where we put on some of my favourite line-ups but we got too big for the venue. The Volks is unpretentious and raw; it’s the Ronseal of Brighton clubs.
I: (laughs) It does what it says on the tin and its 15K sound system is great for our deeper, darker drum’n’bass.
V: Yeah, it’s got a better in-house rig than most other venues in Brighton.

Your no MCs policy is one of Carbon’s distinguishing features, how did it come about?
V: We wanted to get back to the music. I mean, if we could have guaranteed a good MC every month like Stamina or SP then we might have got some involved but we can’t. There are far too many little kids who think they’ve got something to say and think people want to listen – I blame hip hop.
I: Too many times, a shit MC has ruined a good DJ’s set by chatting bollocks on the mic and producers are actually keeping this in mind when making tracks now – MCs are affecting the way d’n’b tunes are being made at the moment. Plus, why would we have an MC when we can just book an extra DJ, you know?
V: We put on who we like listening to, we always have and we always will. We’re not looking to just book big names that will attract a massive crowd, and the artists know this and respect Carbon for it.
I: We’ve adopted a punk mentality, we do what we want. That’s why the deeper artists always happily come back to play at Carbon even if they’ve made it on an international scale, they stay true to the roots.

What do you think about the rest of Brighton’s d’n’b scene?
(They exchange a tight glance and smile)
V: There’s a small minority of promoters who are putting on events and only interested in making money.
I: They’re monopolising the scene, bullying venues to only host their nights, they’re the Simon Cowell of the Brighton club scene.
V: (laughing) It’s all fucking politics, there’s so many d’n’b nights here now that the scene’s completely saturated, everyone’s fighting over common ground.
I: Competition’s good for sure and shows how popular drum’n’bass has become especially down here in Brighton, but too much is as bad as none at all. Like, what would you prefer? Fifteen mediocre events a month that are half full, or four quality events a month that are completely rammed?

Sometimes an article is a bit of a team effort, and those are tagged SOURCE Writers. If you’d like to be part of that team, hit the Contact link at the top and get your work on this website.
← PREVIOUS POST
In Conversation With Cinecity
NEXT POST →
White Night Festival
Mailing List
Recent Posts
Website developed in Brighton by Infobo
Copyright © Brighton Source 2009-2021
Interview: Carbon - Brighton Source