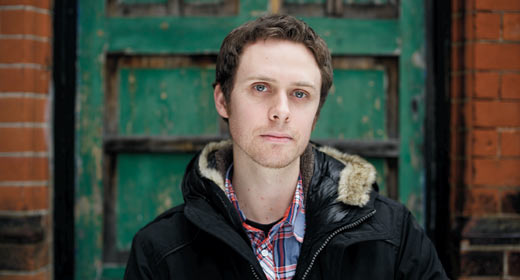 Shortlisted for the Sunday Times Young Writer of the Year and winner of the Desmond Elliot Prize for his first novel ‘Blackmoor’, Brighton’s hottest young novelist Edward Hogan talks about the process of writing and his new book ‘The Hunger Trace’.

JK: At 29 years old, you’ve been acclaimed at a young age. You’ve really hit the ground running. But it can’t have been all plain sailing.
EH: I wrote quite a lot of a really bad novel in my early 20s, about a journalist who can’t get any good stories so he starts killing people. When I was 21 I started sending things out to magazines and getting rejections saying why it wasn’t any good. Then I did a masters at UEA; by then people were reading my work regularly and I knew it was something I wanted to do.

In journalism there’s no feedback or reviews – if you’re not good enough people just stop offering you work. There’s no ‘this is why’.
Rejection is an interesting process, and seeing your books’ reviews is weirdly exposing. I know they’re important and I respect what reviewers do, but then you think, “I’ve spent five years working on this and I have to open this magazine to see if it’s any good.” It taps into the same vibe as rejections; it’s quite a hard process. I got lots of rejections for my first novels and thought I needed a different approach – re-read books I liked and see what they did that was good. Then in the middle of all that ‘Blackmoor’ gets accepted so it’s confusing. I was obviously doing something right after all.

Structuring a novel is different from just being able to write.
It’s that advanced writer’s viewpoint of copying other people – studying the things you like to see why they work. I’ve got a lot of notes and diagrams on the structures of novels I liked; this chapter had so many pages, this is why it worked. The structural part is like a science, and being a writer I’m rubbish at science so I always have to study it. You just have to work at it for ages to make it work; I don’t think it’s anything magical or impossible.

And learn from your mistakes. They’re only really mistakes if you don’t.
I suppose so, yeah. I don’t feel I’m there yet with my writing, there’s certainly loads of room for improvement. Some days it just doesn’t happen and it’s rare to think, yeah, I’m flying. But the overall process, when I finish I’ll think it was really worthwhile, if only because you know what not to do next time. My first novel took me about eight years on and off to finish, with around 20 drafts: try this, doesn’t work, try this, doesn’t work… The second book has been much more of a streamlined process, which has hopefully made it better.

You must have to really inhabit the characters to make them real.
Once I have a character I like and understand, I take it from there. Like Louisa in this book, you work out what’s motivating her – what does she want, what’s she hiding? It’s a haphazard and longwinded case of trial and error; there’s lots of waste but I like trying to get into a person’s life and let the story develop from there. It comes from a life spent spying on people and looking through their windows – I think that’s true for a lot of writers.

Tell us about the new book.
‘The Hunger Trace’ is set on a wildlife park in Derbyshire whose owner David dies. It’s the relationship between his widow Maggie, Christopher, his son from a previous marriage and his long-time friend Louisa. I went to this wildlife park as a kid which closed down. They sold off the animals; the newspaper said you could get an ocelot for £20. Animal activists went round opening the cages; the trains would get stopped due to wallabies on the line. I liked that idea of beasts lurking about, and the isolation of this place high above town.

As well as encouraging people to read with this books issue, we want people to write as well. What do you recommend?
Start with reading, really. Fiction and non-fiction, lots of ideas come from there. It’s a case of keeping your antenna out there – if you keep a notebook handy there are thousands of ideas in just one day. It’s not about just dredging ideas up from memory, just look around you and stimulate your unconscious mind, that’s the way to go.

FYI
‘The Hunger Trace’ by Edward Hogan is out now in hardback, published by Simon & Schuster

James Kendall was the co-owner and editor of SOURCE. He’s been a music journalist since 1992 and spent over a decade travelling the globe covering dance music for DJmag. He’s interviewed a range of subjects from Bat For Lashes, Foals and James ‘LCD Soundsystem’ Murphy to Katie Price and the Sugababes. He’s a keen photographer and has work featured in The Guardian.
← PREVIOUS POST
Best Books By Brighton Authors
NEXT POST →
Paul & Inge Sweetman of City Books, Unsung Heroes No.18
Mailing List
Recent Posts
Website developed in Brighton by Infobo
Copyright © Brighton Source 2009-2020
Edward Hogan Interview - Brighton Source