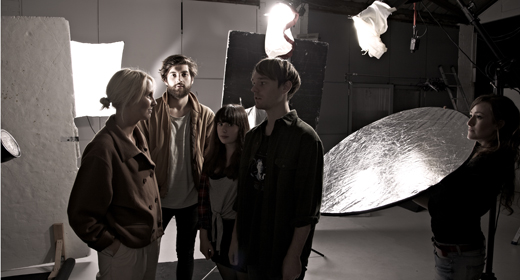 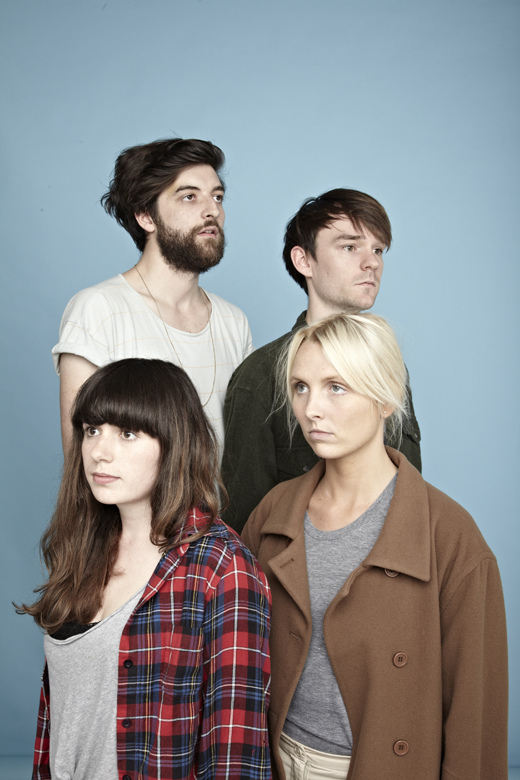 Although famously ignored at the time, The Velvet Underground have become one of the most influential bands of all time because of the way that they mixed art and pop. While John Cale was studying with La Monte Young, Lou Reed was penning minor hits for Pickwick Records like ‘The Ostrich’. But it didn’t take two members of Fear Of Men to get together to hit similar gold; singer Jess already had a love of melody-based songs in her work for her Fine Art & History Of Art degree at Goldmiths. She’d made a batch of instrumental soundscapes for an exhibition, to which Dan came along. “We got talking about various loop pedals and different reverb effects,” says Jess, “and decided that we wanted to do something together.”

And so Fear of Men was born. It didn’t take long for the pair’s project to become more pop song orientated, driven by the back and forth of mixtapes that they would make for each other. The stuff Jess had made reminded Dan of a lot of the 4AD stuff that he loved, like Grouper and the Cocteau Twins – artists that still remain in the band’s sound today. Despite the atmospheric nature of those bands Jess says his history lesson helped her write proper songs.

“We wanted to write pop songs and bring a band element to it,” Dan says. Originally looking for four singing musicians to make the most of the harmonies she’d written, Jess found a vocalist and bassist in Lin. Shame she was actually looking for a flatmate at the time. “I was really weird how well we got on,” Lin remembers of that first Gumtree-fuelled meeting. “We didn’t talk much about the room, we started talking about music instead.”

“I think I asked really early on, ‘Can you play bass?'” Jess laughs. It’s not something that landlords normally look for in a prospective tenant. Lin didn’t take the room, instead moving round the corner, but frequently ended up jamming in Jess’ bedroom. Before Lin’s arrival Anthony was due to play bass. Luckily a degree in music has meant that he can pretty much play any instrument, so slotted in easily behind the drums.

“I was like, ‘I wanna be in the band, I don’t care what I play!'” he says. “It’s great that he can play so many instruments. I can play other instruments too, just not ones we really tend to use,” Lin says with a nod to her trumpet-playing days in jazz, soul and funk bands. “Did you learn how play bass in a progressive Danish primary school, Lin, or is that a myth we made up?” asks Dan. “That’s true. I went to arts school from when I was five until I was 16.”

Fear Of Men had a drummer before Anthony though and it didn’t work out. Unfortunately Jess had already booked their first show. The band had just one month to find Dalston-based Anthony and get stage-ready for a support slot with Former Ghosts.

“That was a good show,” says Anthony, with a mix of pride and slight surprise. “That was a really good show,” echoes Lin. “It was quite amazing how it all happened so quickly. In the last seven months it’s happened so fast. We only actually formed the band in February.”

You might imagine that being so swift out of the gates with a live show that the first release took a while to get together. In fact Brighton’s off-kilter Sex is Disgusting empire released a cassette of their demos – half of which were from Jess’ solo artscape days – before that Green Door Store debut. “Some of the tape is really roughly put together,” winces Jess. “Anthony would probably puke up on it.”

“Jess asked me to put guitar on the two songs for her degree project,” Dan explains. “But I only had an hour before they had to be in. I didn’t even have time to work out what to play so there are parts where I played the wrong bit and Jess had to scoop out the note in ProTools.”

There’s no getting away from the fact that it’s pretty raw, but actually all four songs on the ‘Hanna Schygulla Demos’ are surprisingly fully formed. ‘Phantom Limb’ has that same nostalgic, hidden pop joy as Cults while ‘Green Sea’ is a stripped-back woozy ballad full of emotional fragility. It sold out instantly and the band have plans to release more demo cassettes in between more expensive and time consuming studio-based vinyl releases
.
“It’s pretty scrappy, but it was never an option to say no to it being released,” admits Jess. “It was really cool that someone was that interested, that early on. But we didn’t want lo-fi to be our aesthetic, because there’s an awful lot of bands doing that kind of thing. We changed our recording methods from then. But there were a few things that didn’t go how we wanted them to with our single too.”

While it’s true that ‘Ritual Confession’ – a 7″ from London’s hip Italian Beach Babes imprint – has more sheen that that cassette, it’d be wrong to paint it as anything other than completely real and charming. Classic indie pop, it draws a previous unconnected line between Echobelly and The Pains Of Being Pure At Heart. It chimes with layers of fuzzy beauty – a total success and one of our favourite Brighton songs of the year. It’s drawn radio fans as wide as the 6 Music breakfast show and Frank Skinner.

“But we’re still trying to find our recorded sound, you might say,” shrugs Dan. That might all change as Dan from Esben & The Witch is going to record their next single, a move that Fear Of Men hope will lead to a more experimental studio experience. Whichever way they go with their sound their balance of old and new, pop and art, noise and melody has at its very core an accessibility that’s going to spare Fear Of Men the Velvets’ years in the wilderness.

James Kendall was the co-owner and editor of SOURCE. He’s been a music journalist since 1992 and spent over a decade travelling the globe covering dance music for DJmag. He’s interviewed a range of subjects from Bat For Lashes, Foals and James ‘LCD Soundsystem’ Murphy to Katie Price and the Sugababes. He’s a keen photographer and has work featured in The Guardian.
← PREVIOUS POST
News: October
NEXT POST →
September 2011
Mailing List
Recent Posts
Website developed in Brighton by Infobo
Copyright © Brighton Source 2009-2020
Interview: Fear Of Men - Brighton Source