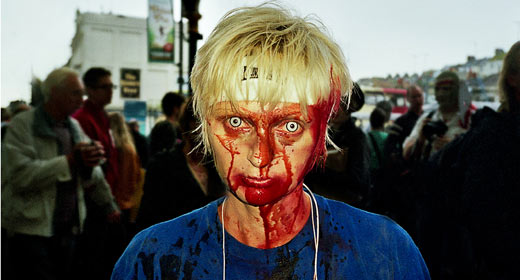 SOURCE NEW MUSIC
Some of the people we book for our SOURCE New Music night we ask to appear because we want to show off how good they are. Holy Vessels fell into that category, as do AK/DK who will play in November. But we signed up Sophie Madeleine to play at the Pavilion Theatre because we really wanted to see what she’s like. Her LP, ‘The Rhythm You Started’ has been a summer office fave and we can’t wait to see Sophie and her ukulele (and band) on stage on Tuesday 4th.

WE ‘LIKE’ THIS
A few years since we all first logged on, Facebook is a strange constant now. Some of us have now blocked so many ‘friends’ it barely updates anymore, but Brighton comic artist Paul Stapleton still sees through it all – the your/you’re grammar conundrums, the new baby bores and dopey Farmville players – in his second Facebook comic book, ‘Achievements’. It’s a really funny read with a double edge to it; it kind of makes you realise you’re as much of a tit as everyone else on there. Check out pogscribbles.org.

KANDI COMES IN HANDY
If you’re a West Street aficionado who’s a bit tired of the seaside establishment scenery, your heart will be gladdened by the arrival of Hed Kandi. The coffee-table-friendly dance label has been granted planning permission to convert the former Tru premises into what our detective prowess tells us will almost certainly be some kind of new nightclub, with all dance music and flashing lights and stuff. They’re just waiting on a further application over what kind of signs they can put up outside – we’re hoping for one actually made of candy, that sweet-toothed clubbers can lick.

INCREASE THE GREASE
If you stick to West Street and don’t look too closely when you see a pair of platforms, you could almost be forgiven for forgetting Brighton’s reputation as the gay capital of England. But every now and then, something like Sing-A-Long Grease at the Duke of York’s comes along. A fundraiser for Brighton Gay Men’s Chorus on Saturday 1st, this actually is an audience participation viewing of Grease the musical, complete with singing tips beforehand, heckling cues and a goody bag for all participants. Fabulous.

BANGERS AND BOOZE
Running alongside National Cask Ale Week, the Bath Arms is rejoicing in a real ale and sausage festival, featuring wares from around the world as well as the brilliant local suppliers we enjoy in Brighton. Even vegetarians are catered for, and frankly, you’d need a good excuse to miss this. We suppose being under 18, Muslim or allergic would suffice. Other than that, no dice. It’s at the Bath Arms from Saturday 1st to Sunday 9th.

DECEASE & ENLIST
Halloween isn’t just for children – it’s time for Beach Of The Dead again on Saturday 22nd. For a few days each year fake blood is worth its weight in cocaine, and for a good few hours traffic is at a standstill while Brighton’s inhabitants take to the streets as the undead, limping and moaning. This year the route begins at Victoria Gardens and there’s a rollicking beach after party at Concorde 2. If you can’t beat ’em, join ’em – details on Facebook.

BURLESQUE OVERLOAD
Brighton seems hell-bent on tasselling its nipples and straddling its poles at the moment, as the world of burlesque takes further hold with new nights popping up all over the place. Hove’s Medicine Chest is doing all-in-one evenings on Thursdays 13th and 27th this month, which are 35 quid for a two-course meal and a cabaret show featuring Divine Miss Em. Brighton Rocks Bar’s new monthly night features Stella Starr and swinging, rocking, Latino and surf sounds from DJ Johnny Stylus. Friday 7th is this month’s date, and it’s free to get in.

Sometimes an article is a bit of a team effort, and those are tagged SOURCE Writers. If you’d like to be part of that team, hit the Contact link at the top and get your work on this website.
← PREVIOUS POST
New In Town: October
NEXT POST →
Interview: Fear Of Men
Mailing List
Recent Posts
Website developed in Brighton by Infobo
Copyright © Brighton Source 2009-2020
News: October - Brighton Source