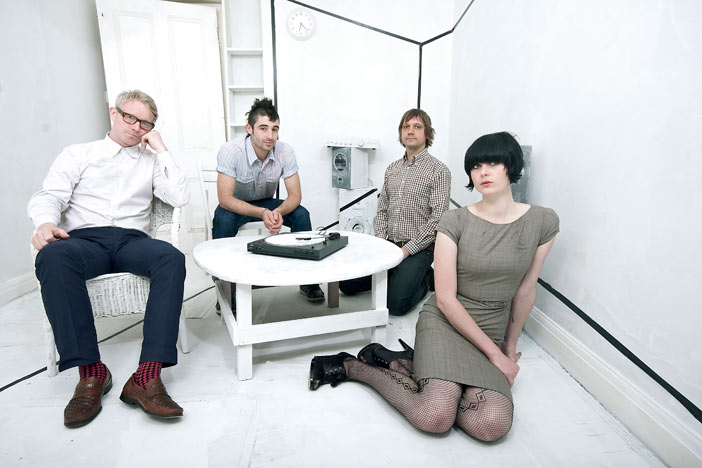 Gloria Cycles know all about what makes a good image. Not only have they got strong graphics and a sharp look (we decide on ‘upper class country mods’), the band was formed through the love of photography and features two talented snappers in its rank. So it’s natural, with such an ambitious shoot coming to a close, talk should turn to what makes a good band photo.

“Tits!” exclaims foul-mouthed Geordie giraffe Jen, “Lots of tits!” Welcome to Gloria’s world, where serious things never get a chance to be taken too seriously.

Let’s start with the four-piece twisted pop band’s brilliant Engine Room residency, Gloria’s Big Night Out. Each month Gloria Cycles play a barnstorming set, spend weeks coming up with themes and hand pick the best guests they can find. Then they throw in a competition. Previously ping pong and Scalextric have made a showing – for the former, energy was restored with bangers’n’mash handed out by ball girls in full attire. This month’s will be a coconut shy. Quite simply it’s the best band residency since BSP’s Club Sea Power – and we don’t remember so many people dancing at that.

“The idea had been kicking around for ages, since the band started really,” explains genial blonde singer Kenny. “The idea was to have fun – to have a monthly night that we could play at but not necessarily have it be just about us.””We’re always mucking about,” adds the bass playing Jen. “Same with the videos, we’re always clowning about with each other, making daft bits and bobs. I see Gloria Cycles as a character, it’s her night out.”
“She’s like the fifth member of the band,” says soft-spoken guitarist Julian.
“She’s a bit of a crazy character…” continues Kenny.
“She comes out and gets fucking shit-faced, shouting!” exclaims Jen. “‘Put your knickers back on Gloria, clean your shoes!’ we tell her.”

June’s theme will be the Fun Of The Fair and alongside the coconut shy will be free moustaches (you’ll need one to be allowed in), a performance from My Federation and the wildest crowd this side of Bangface (more on this later). The Cycles started when Kenny’s previous project ground to a stop. If Gloria is about night-time misbehaviour then Victor Malloy was about fun in the sun, a more gentle experience. While studying photography at Brighton Uni, he met technician Julian whose band The Mosquitoes had also called it a day.
“The Victor Malloy stuff was very slow and chilled,” Kenny remembers. “I enjoyed it, but I wanted to do things that were a bit more uptempo and danceable. After Victor Malloy I knew I wasn’t done yet. It opened doors.”

Jen was next on board, also studying at the university – this time Fashion, Textiles And Knitwear – which she has since deferred to concentrate on the band.”I joined a band at uni,” she says, “Screamy, crazy shit. One day Kenny said to me, ‘You’ve got a bass, do you wanna come over?’ Whenever people say, ‘You wanna do this?’ I always shrug, ‘Yeah, I guess.'”But it would take another band to split before Gloria Cycles could pick up speed. Drummer Jack’s band had called it a day in London and he was packing to leave to the country.
“I was just getting ready to move to LA and I stumbled across Kenny in The Oak,” he says.”That’s our spiritual home,” says Kenny of the St James Street boozer.
“They like a party,” confirms Jen with a smile.

The feeling of love is mutual. When the band recently played the Emergenza battle of the bands gig at Dingwalls in London the pub hired a mini bus and 16 of the regulars came up. So enthusiastic was the response that Jack says it was more like 50 supporters. In the end the mania had spread to rest of the crowd and there were “about 120 people going crazy”.
“It emanated from the guys from The Oak,” says Jack. “Before we even got onstage one of the guys, Finbar, jumped on the stage, grabbed a mic and shouted, ‘Carlsberg don’t do bands but if they did that band would be Gloria Cycles.’ But they just got into it from the first song we played. It’s getting like that at a lot of our gigs now. I think we’ve got the tempo just right.”

“They went nuts,” Kenny laughs. “You could drop a penny and the Oak crowd would’ve danced to the noise it made.”
“The landlord phoned Jen yesterday asking, ‘What day’s this final ‘cos we’re booking a coach?'” She looks equally excited and scared of the prospect.

As well as the chance of winning a German festival slot with the Emergenza final, they’ve also got the release of their debut single to look forward to. Vegas is a pacy, four-to-the-floor number with a huge chorus and a welter of jangling guitars that more than explains the outbreak of dance fever at Gloria gigs.
Kenny explains: “Vegas is a mish-mash about taking drugs and stuff. It started off as a very different animal but then Jack got his hands on it and started upping the tempo. It’s a dancefloor thing. We’re releasing it through our own label, Wendy Bikes. That name came from Johnny Wills.”
“He came in one day and said, ‘I want to start a Gloria Cycles tribute band called Wendy Bikes. The thing is, you are the tribute band!'” laughs Jen.
“So we nicked it and said, ‘Right, that’s the record label name,'” continues Kenny. “There’s also a dance remix of Vegas by Lee Baker, the frontman from My Federation. He’s a great producer. He really helped us define our studio sound.”

Another important part of the Cycles package is their graphic design – Kenny believes the look and the sound of their output are inextricably linked.
“Sam Chivers, who’s a mate of Jules’, gave us an identity in terms of the graphics when we put the band together and I think we took a lot from his artwork. He designed the logo and did the screenprints. He does all our design work and he really captured our music in the imagery.” Sam, part of the BRAG collective, is seen as very much the fifth member of the band.

One of Gloria Cycles’ defining moments so far has been their set at The Great Escape, where they won over a crowd largely made up of newcomers.Jen agrees, “It was great, I loved it. It was very, very sweaty.”
“It was roasting,” adds Kenny. “We were shitting ourselves a bit with the numbers because it wasn’t that busy for the other bands, but then ten minutes before we went on it was packed. It was a really good slot, ‘cos a lot of the other venues were shut by then. It was full of people with delegate passes, and fresh people who we’d never seen before, dancing. It’s great, isn’t it?”

And it is. For Gloria Cycles it’s all great, and getting better.

“WHICH ONE’S GLORIA?”
5 bands that could be solo artists

FRANZ FERDINAND
ARE: Catchy Scotch art-poppers
SHOULD BE: Assassination-based catalyst for World War 1

DANNY WILSON
ARE: Mary-praying one hit wonders from 80s.
SHOULD BE: Annoying Madeira Drive tyre screecher.

James Kendall was the co-owner and editor of SOURCE. He’s been a music journalist since 1992 and spent over a decade travelling the globe covering dance music for DJmag. He’s interviewed a range of subjects from Bat For Lashes, Foals and James ‘LCD Soundsystem’ Murphy to Katie Price and the Sugababes. He’s a keen photographer and has work featured in The Guardian.
← PREVIOUS POST
Secret Eater: Bom-Bane's
NEXT POST →
Interview: Dynamite Sal