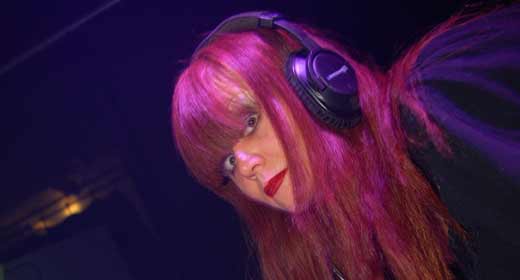 Dynamite Sal has been working at the pop coalface for over 15 years, not least as the DJ behind Dynamite Boogaloo, whose cabaret knees-up moves to Arc this month. Her mix of dance and hip hop, indie and pure pop is what the genre is all about – popular, accessible music with tunes that lodge in your head until you have to bash them out with the next gem. If there’s a DJ that causes as many smiles on the dancefloor we’re not sure we’ve met them.

What does pop music mean to you?
That people like it. Lots of things could be ‘pop music’ if they were given the opportunity to be heard, but these days it’s a lot harder. I think Crystal Castles are a pop band, they’re popular and they make music that’s quite easy to listen to and is very current. I think that’s what pop music means – it defines popular culture at the time.

Do you think people need to have to have more courage in their convictions?
Absolutely. For years and years everyone hated the Cure, then bands like Interpol started namedropping them and suddenly The Cure couldn’t be cooler. You have to be confident and say “I like The Cure”. I don’t need some American band to justify that to me.

How long have you been DJing now, is it as much fun as it used to be?
Probably 16 years now, and sometimes yes, sometimes no. I still love playing a new record and getting people to really love it, like the new Santogold record. And The Ting Tings, but already they’re already ‘too poppy’, too popular. That’s another thing I really despise, when people turn their back on something just because they’ve actually got a little bit of fame and fortune, I think that’s a bit rubbish and sad, it’s what everyone’s aiming for to be fair.

In the dance music years when the emphasis was on obscure records, were you ever tempted that way?
Back when there were no CD players in clubs and no downloads, you still had to work hard to get certain tunes on vinyl, there was no other way of playing them. You had to get on mailing lists and scour charity shops to get that obscure record someone had sampled. I spent days trawling through records to find all these things. So in a way the fun’s gone now, you can just go and download it, no effort required. You still need to know your music but at one point if you didn’t have the Motiv-8 mix of ‘Disco 2000’ people would throw tomatoes at you, you just had to have it, and the only way was on a piece of vinyl.

A lot of your nights are moving about at the moment aren’t they?
Dynamite Boogaloo is moving to Arc, that starts the first week in June. It’s going to be quite alternative and different to the other clubs down there. And then there’s Super Dynamite Boogaloo at Komedia on the last Saturday of the month.

What’s the difference between the two Boogaloos?
The Saturday is more of an older, weekend crowd that remember Dynamite Boogaloo from the old days and maybe have proper jobs so they don’t go out midweek so much. We do three cabarets throughout the night with guests, so that gives it a different edge.

Where’s We Love Pop at the moment?
The Hanbury, every alternate month. It’s doing really well but I’m taking the pop mantra to a much bigger audience to Coalition. It’s going to be called Pop Musik and it’s gonna be bigger and better with nice views of the seafront – a very different kind of vibe. That’s going to be every third Saturday of the month, starting July 19th. Proper pop music!

James Kendall was the co-owner and editor of SOURCE. He’s been a music journalist since 1992 and spent over a decade travelling the globe covering dance music for DJmag. He’s interviewed a range of subjects from Bat For Lashes, Foals and James ‘LCD Soundsystem’ Murphy to Katie Price and the Sugababes. He’s a keen photographer and has work featured in The Guardian.
← PREVIOUS POST
Gloria Cycles Interview
NEXT POST →
Critic: Demo Reviews June 2008
Mailing List
Recent Posts
Website developed in Brighton by Infobo
Copyright © Brighton Source 2009-2021
Interview: Dynamite Sal - Brighton Source