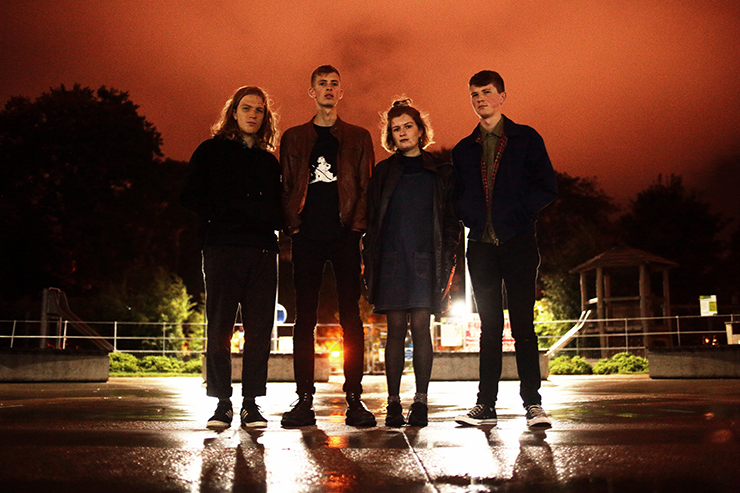 Lockdown may be easing, for better or for worse, but it’s probably going to be another several months before gigs start happening again. In the meantime, we’re enjoying the stream of new music that’s been released by Brighton acts this summer. This round-up of local releases includes singles from J-Felix, Hannah Nelson, Dom Champ and The Pedestrian Screeds – as well as EPs from from Dog Of Man, Sit Down and Half A Crayon. We’ve also been listening to grasshopper’s debut album, the first full-length offering from Via Tirana and a benefit compilation of local acts put together by Halfmeltedbrain Records.

With its jangly guitar, buoyant synth solo and off-kilter 7th chords (we think that’s what they are anyway), this concise slice of sweet dream pop conjures up a similar summery vibe to one of our favourite Brighton bands, Penelope Isles. Somebody get on the phone to Bella Union records! In less than three minutes it zips by, like the reflective cyclist in the lyrics (and on the cool cover artwork), climaxing with a choppy Johnny Marr-ish outro that’ll leave you wanting to hop back into the saddle and enjoy the ride again. (GR)

J-Felix
‘Be Thankful for What You Got’ (feat. Sol Goodman)

This track is an absolute mood. J-Felix’s smooth and snappy edit of William DeVaughn’s original could be the sound we all need to hear right now. Brighton’s super-experienced Tru Thoughts stable always guarantees professional-end quality: the iconic vocals are tuned tight with a smoothing of the background and layers of accent instrumentals, well-executed new corners and curves. This track is a respectful reboot, not a remix, of a well-loved classic. It’s also a burst of joy with a core sentiment that relates to the weird and not-always wonderful times we are in right now. J-Felix himself says: “consuming less and not being able to travel has forced most of us to stop for a minute.” An ideal anthem for lockdown as we move into summer days. (LB)

Dom Champ
‘Slow’
Post-grime? New-school trip-hop? It’s hard to genre-ize Don Champ’s new single. ‘Slow’ mixes up staccato lyrical rhythms and melancholy fluid sounds. It’s a more mature effort than the Brighton-based musician and lyricist’s previous releases, although the subtlety of the blend and the bass-bounces could get lost on some playback settings, especially as the track moves into its ‘second act’ and toward a more breakbeat-oriented mood. Champ’s sound isn’t strictly aligned with any of the core street genres right now, and that’s one of the reasons we like it. It’s not unique as such, but it seems to be personal, and that’s what this kind of music does best. One for the garage generation looking for something more substantial on their stereo, there is a ton of potential here. (LB)

We like it when bands write songs about their hometown, probably for the same reason we cringe when UK singers adopt an American accent. We know nothing about The Pedestrian Screeds other than that they might have taken their name from a power tool used to smooth concrete – and the fact they released a rather strange album in May. This single, ‘Directions’, charts a journey from Ditchling Rise to Palmeira Square while mythologizing landmarks along the way with amusingly inventive language. “You will see a huge dark mouth, industrial plant snakes will be lurching over you,” they remark about the manky railway bridge that leads up to Seven Dials, “the path narrows to a shrub-encroached nothing and you will find yourself at the arterial nexus.” (BB)

Half A Crayon
‘Oni Kudaki’

You’d be forgiven for assuming that an EP named after a ninjutsu move which roughly translates as ‘demon crusher’ would contain some variety of doom metal. But you’d be wrong. To the contrary, this solo debut release from the Melt Plastic Group drummer offers the most serene music we’ve heard in a long time. While some people’s response to lockdown has been to fret and rage, Half A Crayon’s Gazik Stan seems to have spent the time immersed in psychedelic meditation. The result is a rich and atmospheric soundscape awash with wah-wah and stereo panning. ‘Schism Smash’ introduces an eastern flavour with synth drones and flowing upbeat percussion, while ‘Mycoremediation’ samples Paul Stamets’ extraordinary psilocybin revelations on Joe Rogan’s show. If disciplined bliss is the guiding principle here then maybe it’s best described as ‘ninja psych’. (BB)

Sit Down
‘Nice One’

This two-piece tour-de-force frequently outperform the bigger bands they share a stage with and, with gigs on hold, it’s a great time to self-release new music and this EP shows they can recreate the excitement of their live shows in the studio. ‘Told U So’ begins with an Eastern flavour before an industrial bass kicks in and the two meld to back a brooding Krautrock theme with explosive elements. ‘Banana Split’ is a blast that recalls a heavier CSS, while the EP closes with ‘Feel It’, a menacing soundtrack for these anxious times. The title sums it up well – nice one! (SC)

Dog Of Man
‘Take The Edge Off’

Brighton’s renowned folk-punkers’ new EP begins with the apt ‘Chaos Reigns’, a wistful, sweeping old-school fireside slow burner. ‘Meatcure’ (check out the excellent video with a fucked-up loser running amok around Brighton), is a banjo-led punked-up bluegrass romp and is followed by ‘Stay Human’ an ode to becoming domesticated set to a Wild West rhythm that culminates in a duelling banjo/guitar finale. Their famed accordion makes more of an appearance on the boisterous ‘Turpentine’. Buy this and then see them live when you can. (SC)

“Bong” is such a versatile punning word (bong voyage, king bong, bong bath… we could go on) and the title of this Halfmeltedbrain Records compilation scores a direct hit. The label is home to some of our edgiest, weirdest and most unrepentantly noisy artists (yes, if you thought bongs were just for harem pants and chillout dub, you’ve obviously never heard Nuclear Breakfast). But there are moments of serenity here too. The hypnotic, gong-banging Traps track ‘Bum Shelf’ is among the highlights, as is the darkly cosmic jazz of Codex Serafini’s ‘Cronus’. Proceeds go towards the #SAVEOURVENUES campaign, in a rescue bid for one of the label’s favourite venues, The Pipeline. So buying it helps a really good cause too. (GR)

Via Tirana
‘Dave The Machine’

This outfit have been producing music since 2015 but this eight-track release is their first full-length album. With no sign of clubs opening anytime soon, Via Tirana have produced a grandiose album to dance around your bedroom to. It opens with the multi-layered ‘Ice Cream’ featuring Alex Painter on sax and a high-pitched vocal that gradually builds to a catchy chorus singalong. The title track is a mid-paced indie disco throbber co-written by the Berlin DJ/producer Freudenthal, with a heavy bassline like something from an early Depeche Mode number. There are elements of lighter synth pop on several tracks but overall, the album has a dark, sensual feel that deserves a crammed, low-lit basement dancefloor. Until that can happen, grab a drink, draw the curtains and dance to Via Tirana. (SC)

Four years in the making, ‘Scuttle’ is a grand distillation of the gothic and post-punk influences that have driven grasshopper (pictured above) since the band started playing together as teenagers. Continuing their partnership with producer David M Allen, the Brighton four-piece have conjured an arrestingly macabre sound from the moody and layered textures of 80s bands like The Psychedelic Furs, The Sisters Of Mercy and The Cure (all of whom Allen worked with at some point). Frontman Javi Fedrick excels in the arch narrator mode – recalling Interpol’s Paul Banks – while the band demonstrate their versatility on the choppy and driving ‘The Hand On The Knife’ and the epically mournful ‘The Great Unravelling‘ – both standout tracks with great titles. All proceeds from this month’s album sales are being donated to Black Lives Matter organisations. (BB)

Sometimes an article is a bit of a team effort, and those are tagged SOURCE Writers. If you’d like to be part of that team, hit the Contact link at the top and get your work on this website.
← PREVIOUS POST
Six Of The Best Virtual Club Nights
NEXT POST →
Thousands march in Brighton for Black Lives Matter
Mailing List
Recent Posts
Website developed in Brighton by Infobo
Copyright © Brighton Source 2009-2021
Locally Sourced, June 2020 - Brighton Source