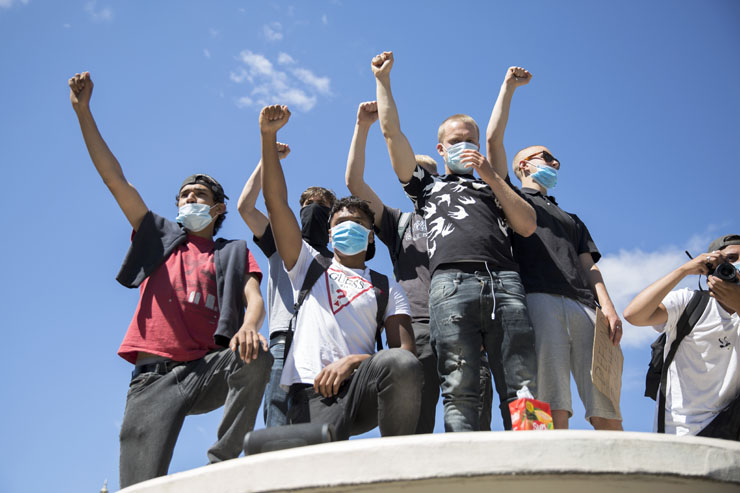 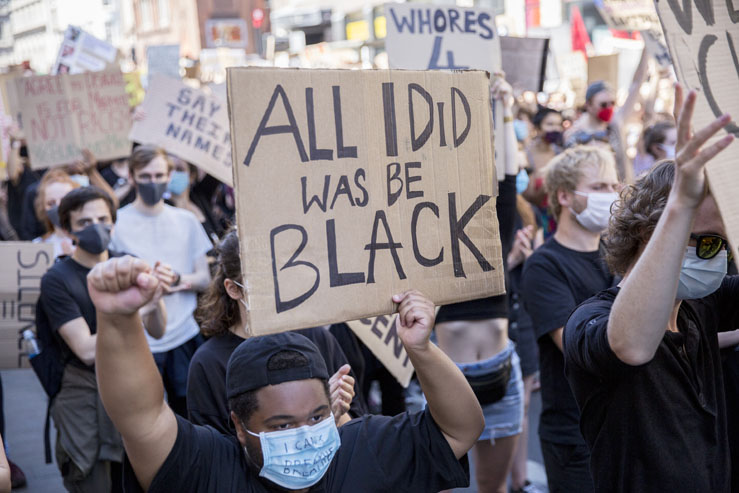 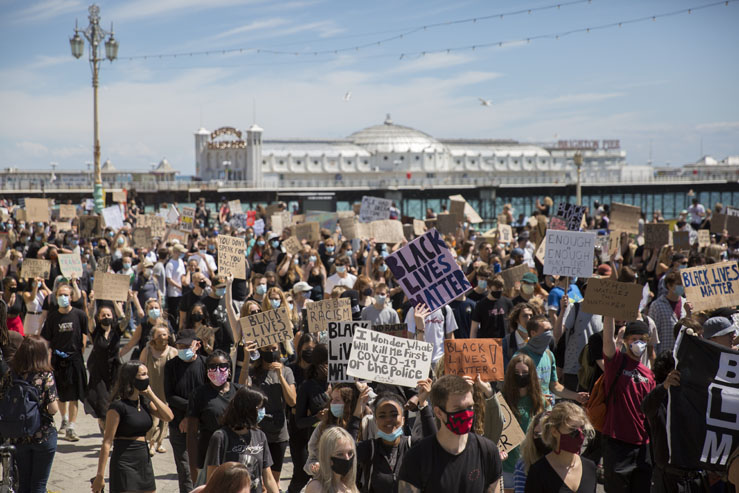 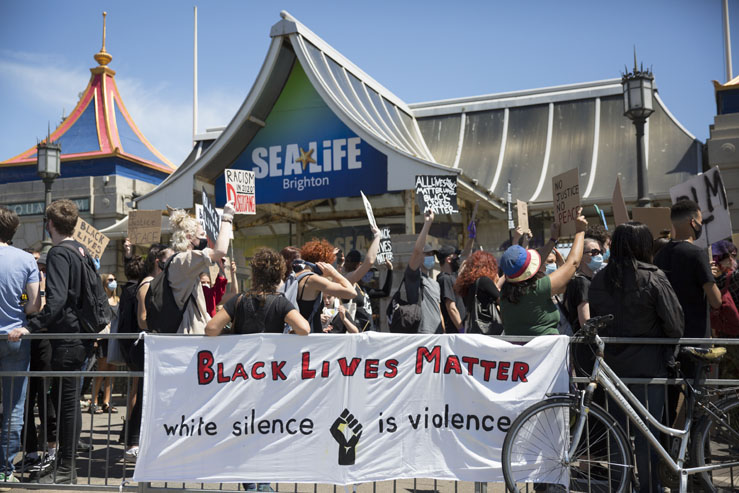 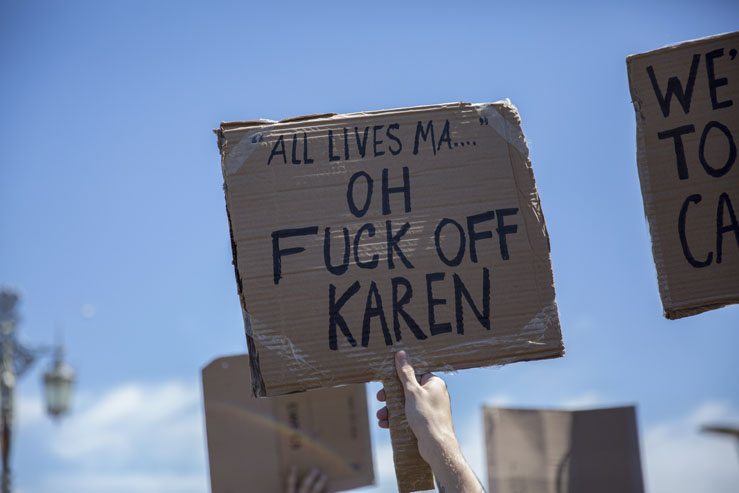 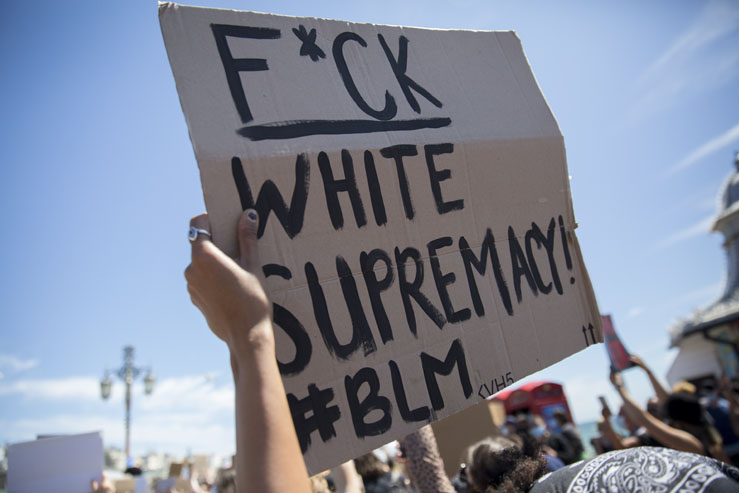 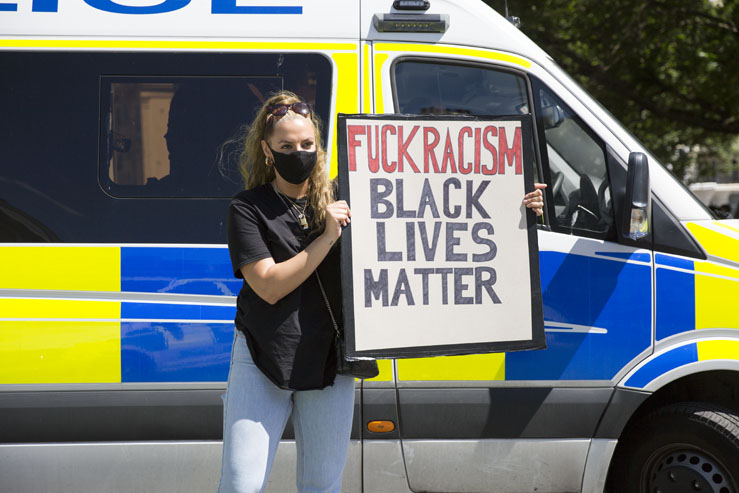 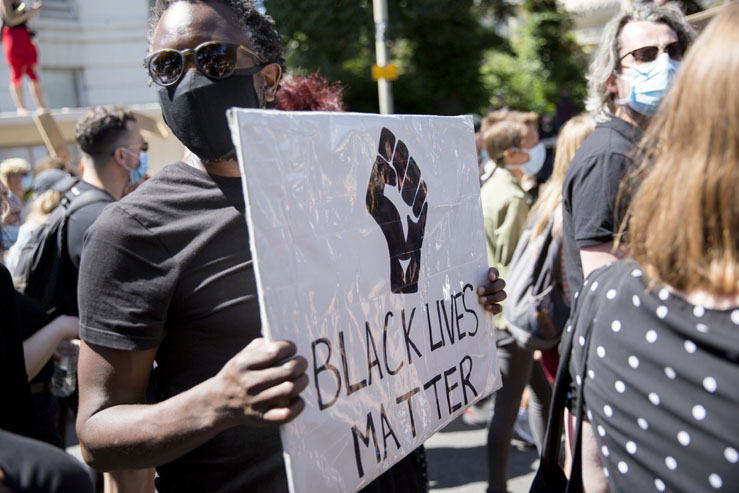 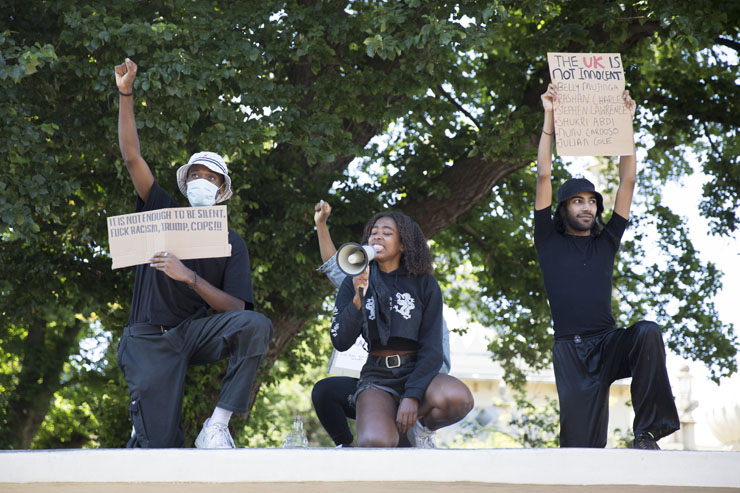 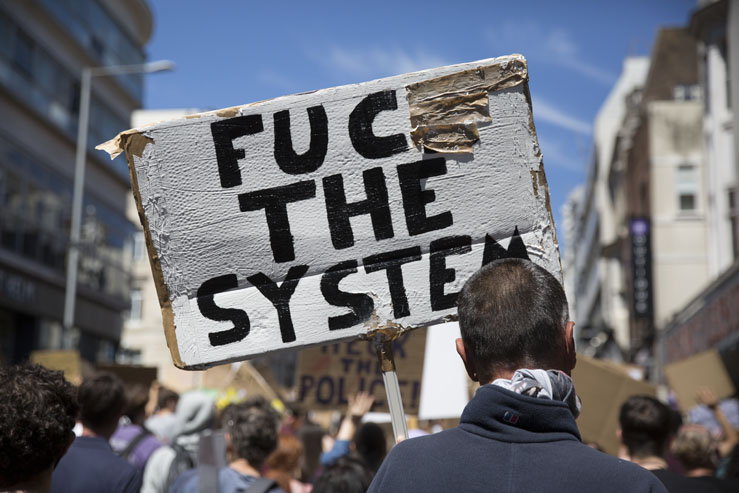 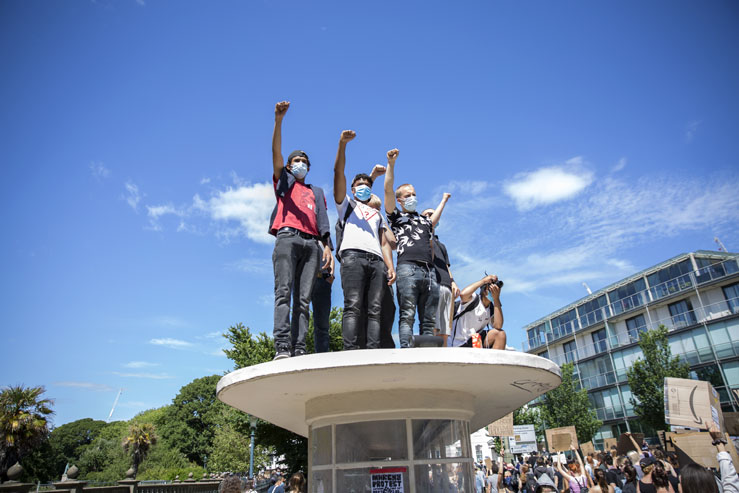 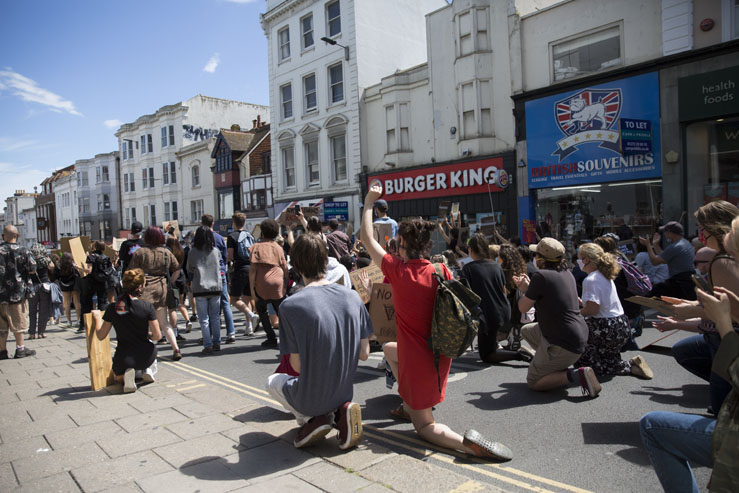 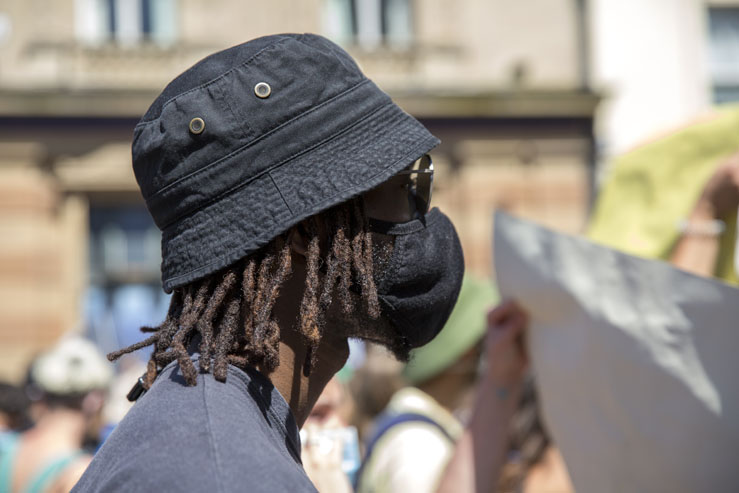 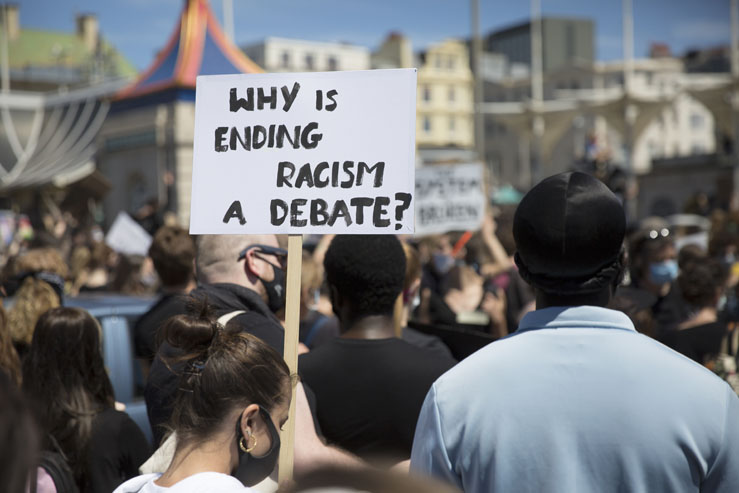 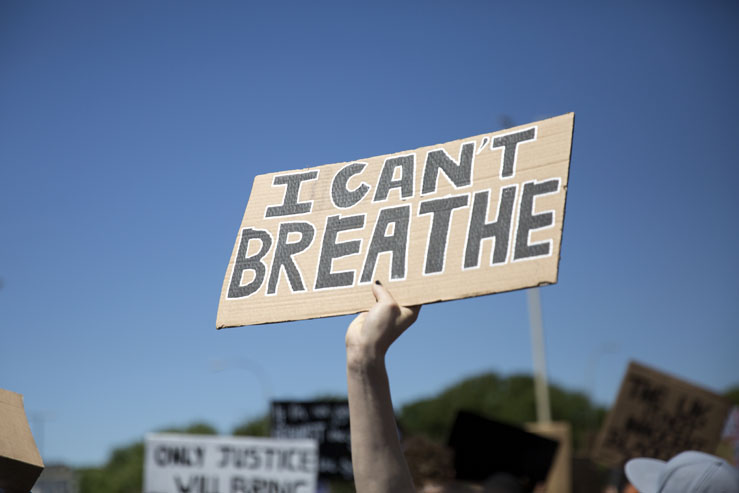 Thousands of people took to the streets of Brighton yesterday in a show of unity and support for Black Lives Matter. The death of George Floyd on 25th May, under the brutal boot of the Minneapolis police, has caused outrage around the world.

The Brighton protest, which drew an estimated 10,000 plus attendees, thankfully passed with no violence and zero arrests. It was a very different story in London, where far-right ‘statue protectors’ fought with police, and even threw in the odd Nazi salute for good measure. It’s worth noting that the London BLM protests were called off to avoid confrontations. With hindsight, a great shout.

Back to Brighton, and the day started with a socially-distanced protest that spread for over a mile along Marine Parade, people standing in silence and solidarity. The main protest then started at the Palace Pier, before heading along the seafront and through town via the clock tower, finishing at the Level with a number of short speeches.

It’s fair to say social distancing didn’t really happen once the march got moving, especially where space was limited. We’d say over 95% of people wore masks, with volunteers dishing out spares and providing hand sanitizer. It was an issue we considered long and hard before attending, but felt the moment was too important. Tombstoning off Durdle Door this was not.

Throughout the march, George Floyd’s name was used in a call-and-response chant by protesters, as was Breonna Taylor’s (shot eight times in her own home by the Louisiana Police). Placards paid tribute to the long list of black people who have lost their lives at the hands of the police. “The UK is not innocent”, “No justice, no peace, no fascist police” and of course “Black lives matter” were consistent calls that filled the air.

Tensions rose near the Old Steine war memorial, where 30 or so people had gathered to ‘protect’ it, but from whom? We can’t imagine why anyone on the march would want to have a go at a war memorial, especially one dedicated to soldiers who fought against Hitler. In any case, police soon acted as a shield to keep the groups apart and prevent clashes. One protester was allowed to climb on top of a police van and used a megaphone to urge others to move on and focus their energies on the cause. We heard (unconfirmed) rumours that the 30 blokes were later kettled by the police and that some resorted to pissing on the memorial they were supposedly there to protect.

Elsewhere, there was a beautiful sense of togetherness. Brighton has always been an open minded place, and this show of unity felt important. The impact of the day will depend on your personal viewpoint, on your background and own experiences. And maybe on your colour. Social media has become particularly toxic in recent weeks, and looking outside of one’s bubble can be worrying. Far too many people seem incapable of registering why ‘all lives matter’ is a wholly inappropriate response. Where the fuck is the empathy?!

There will no doubt be many views and interpretations of the weekend’s events. However, it was certainly the biggest protest we’ve ever seen in Brighton. For the thousands who made it happen, putting this issue at front of mind is long overdue. #blacklivesmatter

Brighton, Saturday 13th June 2020
Photos by Time for Heroes
You may also like:
Extinction Rebellion in Brighton
Source Virgins: Protesting