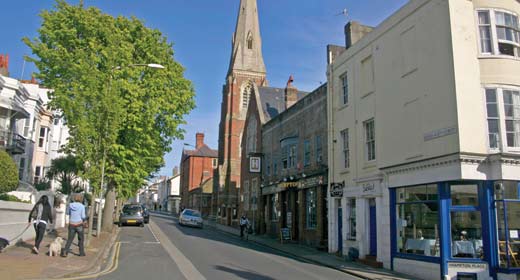 That’s the road I cut down because they won’t let me drive up Western Road, right?
Er, yes. Upper North Street can be a bit of a rat run, but don’t let’s start off on a negative. If you live on a road, you kind of expect cars to drive up and down it.

That’s true. OK, let’s examine the booze. Everyone likes booze. Except recovering alcoholics. And Muslims.
Well, those seeking a cold drink are pretty well served here. We like The Windmill a lot; it’s a small-ish local type pub with nice vibes and good food. The Hampton Arms is a similar sort of place with great Sunday roasts. The Florist is also pretty good – Matt, our designer, does a pop quiz there of a Wednesday.

What about eats? Isn’t it a bit off the beaten track to have anything decent?
No, it isn’t. A bit further down Montpelier is La Cucina, a fab pizza place, there’s Billy’s Café on Hampton Place – that’s real good eating right there. For a slightly odder experience try Barry At The Tureen – great grub, kitschy décor and bonkers banter from Barry himself.

All good. I’m drunk, I’m fat, I’m happy. What else can I spend my money on?
Get yourself some body art – that’s always a good idea when you’ve had a drink. Magnum Opus is one of the city’s best tattooists, and it’s a sociable place as well, with exhibitions and even occasional live music. Or there’s Wardrobe, a great clothes shop if you’re after something special. Upper North Street also has an inordinate amount of antique shops for some reason, with plenty of quirky, crib-enhancing items for not too much dough.

OK, add skint to that list. Anything else of note?
There’s a graveyard up the end of the street if you’re one of those people who larks about amid the stones with cans of cider listening to death metal. Or indeed need to bury a relative.

Excellent. So apart from my opening gripe about cars and that, anything else to beware of?
Well, it feels a bit uncharitable to mention it, but you might find the streets a little over-catered for by homeless types. There’s a drop in centre nearby for them, and we’re not going to argue with that. Keep an open mind, people.

Sometimes an article is a bit of a team effort, and those are tagged SOURCE Writers. If you’d like to be part of that team, hit the Contact link at the top and get your work on this website.
← PREVIOUS POST
Interview: Yusuf Sebaiti
NEXT POST →
Street Style: Harry
Mailing List
Recent Posts
Website developed in Brighton by Infobo
Copyright © Brighton Source 2009-2021
Streets Of Brighton: Upper North Street - Brighton Source