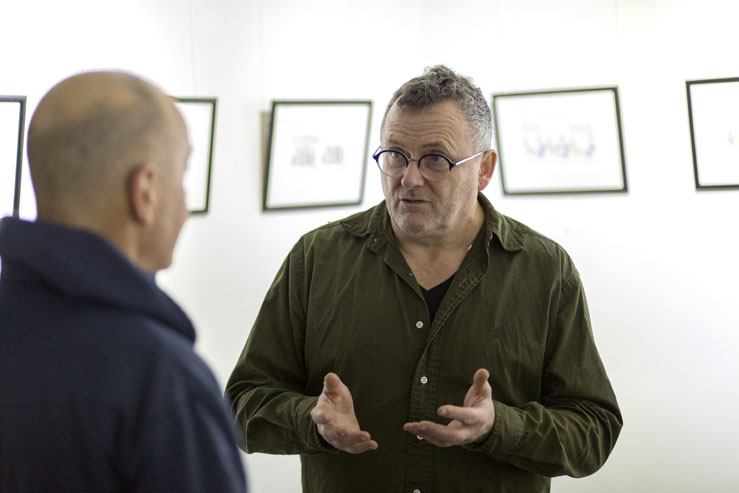 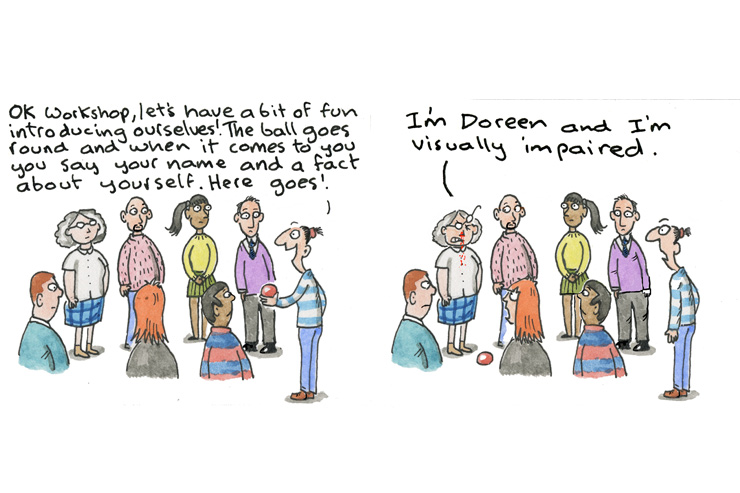 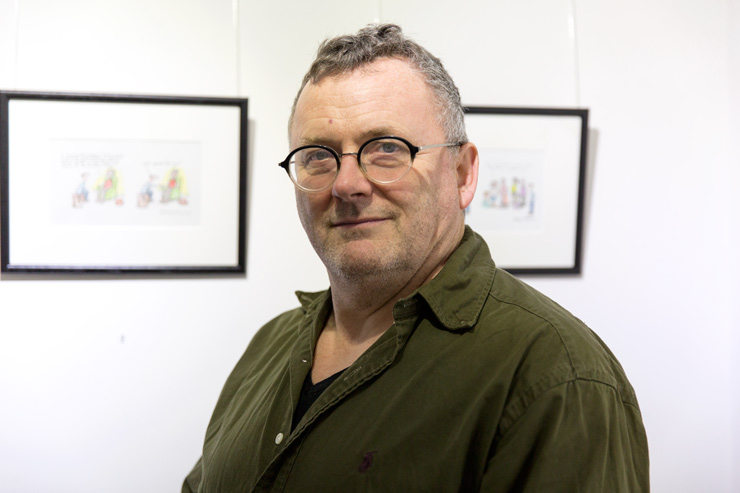 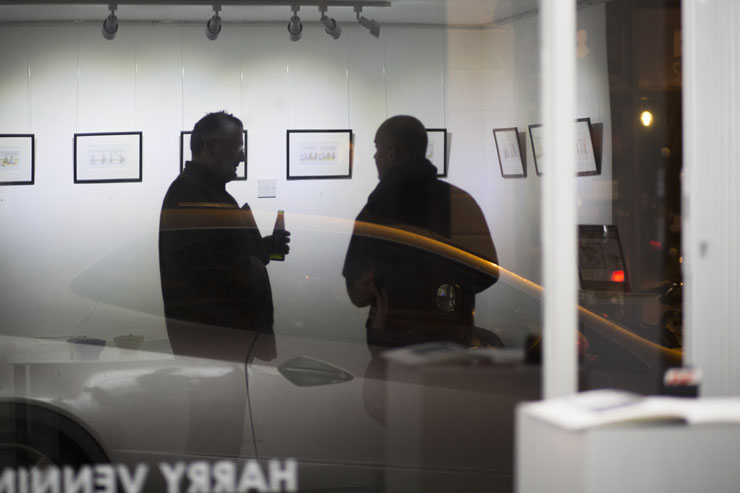 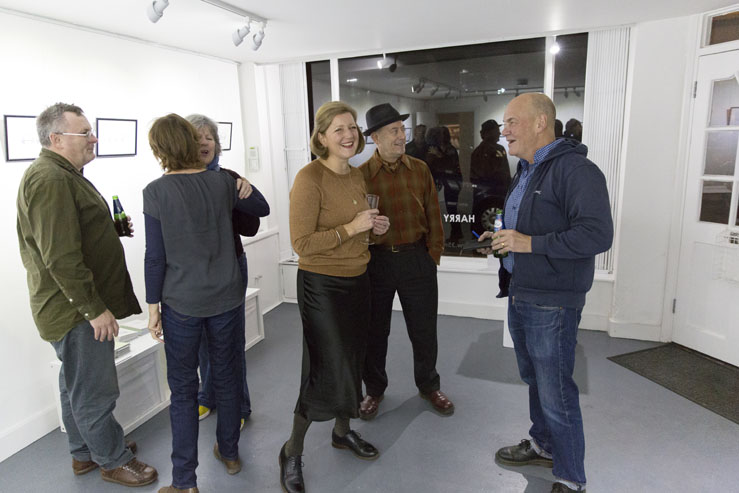 A lot of funny people have ended up living in Brighton. From authors to playwrights, stand-up comedians to newspaper cartoonists, the city seems to attract more than its fair share of individuals with a quirky sense of humour. Harry Venning, originally from Wembley, in suburban north London, is one of the funniest – as confirmed by his recent winning of the prestigious UK Art Trust Strip Cartoonist of the Year. When we learn that an exhibition of his most recent ‘Clare in the Community’ cartoons is being held at Gallery 35, we at SOURCE head down to check them out and talk to the man himself.

Originally a jobbing actor, Harry explains that he grew tired of life on the road and decided instead to turn his hand to cartoons. Although he did not go down the art college route, natural talent – and a trusty Rotring Isograph pen – enabled him to express his razor-sharp sense of humour in words and illustrations. It wasn’t long before his work was being published in a string of newspapers and magazines, including The Stage, where the two careers – actor and cartoonist – came together in a strip cartoon about a habitually out-of-work thespian pig, ‘Hamlet’.

It is, however, ‘Clare in the Community’ that is Harry’s most successful, and enduring, creation. Lacking empathy, compassion and self-awareness, social worker Clare Barker is in truth a bit of a monster – “the Rottweiler of the caring professions”, as The Sunday Times put it – but also one of the funniest characters to grace the pages of a national newspaper. Originally commissioned by The Guardian in 1996 as a black and white strip cartoon, ‘Clare in the Community’ has appeared each week for the last 23 years. In 2005, changing production values meant that the cartoon switched to colour. Still using old-style Rotring pens – “which are getting harder and harder to find” – for the drawing, he now added traditional water-colour paint. The one nod to the modern world is that today, instead of using Tippex, Harry now “tidies up” the pictures on a computer.

‘Clare in the Community’ went on to reach a wider audience when it appeared on Radio 4, the scripts written by Harry himself, along with David Ramsden. Running from November 2004 to October of this year, the award-winning series has clocked up a total of 72 episodes, plus an extra three specials.

The radio series is excellent, with sharp, often hilarious, dialogue. For us, though, it is strip cartoons that led to it, where an apposite phrase or a facial expression can nail an important issue, that still work best. A walk round the gallery confirms that Harry Venning is a master of observational humour. He watches, he listens, he identifies the absurdity of a person or a situation, and turns it into a pithy depiction, the humour deriving from its familiarity.

We ask him the question that everyone always wants to know, but no artist can ever fully explain: “Where do you get your ideas from?” ‘Hamlet’, of course, was based in part on Harry’s own experiences in the theatre. ‘Clare in the Community’, on the other hand, originated from a time when he went out with a social worker. While, as he is at pains to explain, the woman was not Clare herself, there was plenty of raw material for him to draw on. Nor, he expands, are the cartoons about “having a go” at social workers, whose role in society is as invaluable as it is often thankless. “Social workers like the cartoons. They don’t see themselves in them,” Harry explains, adding with a smile, “They see their colleagues.”

Apart from these personal reference points, Harry finds inspiration in a range of other places. Stories in the news; eavesdropped conversations. Brighton is apparently an ideal city for source material. In one cartoon, Clare is interrogating a girl on a stall about the ingredients of her cakes. Having discovered that there is nothing vegan, lactose free, gluten free, sugar or egg free, she offers advice: “A word to the wise, kid: You’ll not make any money around here just selling this weird shit.”

In another, where Clare is confronted by a woman who proves more than equal to her own acerbity, she is told, “Balance is off but nothing serious, bodywork is generally good, but I’m going to have to fail you on the emissions.”. “Wow!” Clare responds. “I never realised it was so hard to get into a yoga class.”

And one of our favourites sees our right-on political activist kneeling down next to a placard with SAY NO TO emblazoned across it, about to attach the word TRUMP underneath. Behind her are a collection of older worthy causes – WHALING, TRIDENT, CLIMATE CHANGE, AUSTERITY, BREXIT, FOSSIL FUELS, THE CUTS, FOX HUNTING.

The original strip cartoons on display are all from the last year. As well as these, there are also cards and a 2020 calendar for sale: “Twelve months fun for the price of a cup of coffee (in Zurich)” as he puts it. In addition, Harry will be hosting a cartoon workshop – ‘Release Your Inner Cartoonist’ – on Saturday 14th December, where he will satisfy everyone’s live cartooning needs. “Except tigers,” he adds. “ I can’t draw tigers. Not properly.”

Tigers or no tigers, we recommend you get down to the gallery to check out Harry Venning’s work for yourself. Given everything that’s going on in the country at the moment, we could all do with a good laugh.

‘Clare in the Community’ : An Exhibition Of Recent Strip Cartoons by Harry Venning
Running until 21 December 2019
Further details on the cartoon workshop on through the gallery
35 North Gallery

This isn’t the first interview we’ve done with artists at 35 North Gallery.
Read our interviews with John Brockliss and John Whiting.

Paul Stewart is an author - mainly novels for kids - but his main love has always been live music. These days, the words that fill his head at gigs often turn into reviews for Brighton Source, the going-out bible for his favourite city anywhere, ever.
← PREVIOUS POST
Penelope Isles Review
NEXT POST →
SOURCE Virgins: First Time Canvassing