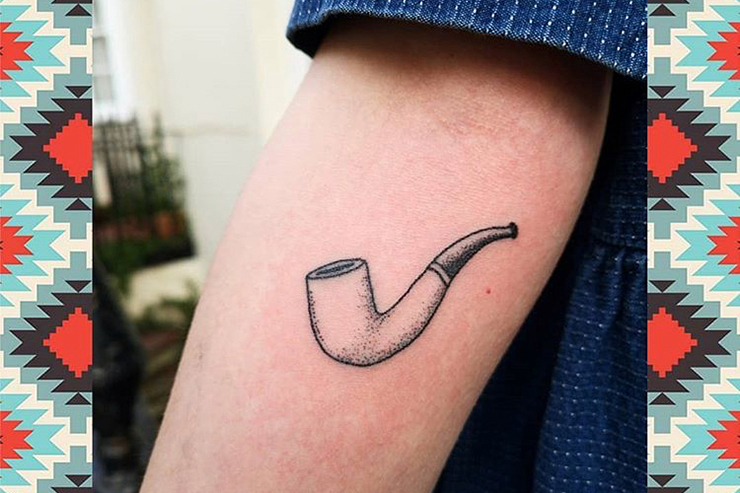 SOURCE Virgins: Getting a Tattoo

I am being hand-poked by a stranger in a messy incense-scented living room. A hungover housemate enters mid-poke with a small dog. As first-time tattoo experiences go, this could be the dream or a nightmare (depending on your perspective). I can hear myself explaining this to work colleagues and mums on the school run, and it doesn’t sound good. However, it was good.

THE REASONS
At the ripe old age of 39, I had spent many a year contemplating getting a tattoo. Plenty of things were putting me off: bad tattoos (friends who had dolphins/tribal/Chinese symbols etc in the 90s), pain (I’m a wimp) and my fickle nature (if I can hate a pair of shoes I once vehemently coveted, how can I possibly get a permanent inking on my skin?). However, I knew what tattoo I wanted from around the age of 31, when my dad died and I felt like a meaningful inking would be timeless. He smoked a pipe and (although that’s quite possibly what gave him cancer), a pipe just makes me think of him in a very warm and fuzzy way.

Still the pain thing played on my mind. My tattooed friends and their descriptions of the needle dragging and scratching through your skin – er, thanks for that info – not something I’m up for.

Then one day (thanks to social media), I saw a hand-poked tattoo and read that it didn’t hurt. Now, I certainly didn’t believe that it wouldn’t hurt, however, I could see how a small hand-poked tattoo might be a much more bearable intro to inking than a standard gun.

THE EXPERIENCE
And so I set about my (slow) process to get it done. Long story short, after dealing with a tattooist who stopped replying and one so popular the waiting list for a consultation made me lose interest, I found ‘the one’ or at least, ‘the available one’. We exchanged emails and it went well. I liked the way she sounded and I liked her sketches, she also had availability quite quickly so I didn’t have too much time to think about it.

And yes, as a grown-up, I always thought that if I did get a tattoo, I would arrive at a reputable establishment, have a consultation, come back for the real deal and leave with a set of elaborate instructions for aftercare.

Instead, I found myself hopping on a bus to a residential street, excited but still not entirely convinced I would go through with it. The tattoo would cost £65 and this is a valuable slot I’m taking… if I change my mind, can I just chuck a tenner at her and run?!

I pop to Small Batch to grab a coffee beforehand and that turns out to be a good move. Everyone has tattoos. They all seem happy. Their tattoos look good. I can do this!

I arrive at the house and I am not disappointed by Lily’s greeting (she hugs me) and in we go to sit and chat. It would be more dramatic to describe the house as a crack den (and I am sure that’s what people picture when you say you were tattooed in a house), but it’s just a typical shared house and they have a Christmas tree up. Lily is having a cup of tea.

Her tattoo equipment is fully packaged, so I see new needles opened from fresh packets and the Dettol is out so I’m feeling clean! A chat about placement and the stencil goes on – I still do feel like I can back out if I want to though. It’s relaxed.

Lily says that once she starts I will turn to her and say “Is that it?” and I do. Because quite simply, it doesn’t hurt. Ok, it hurts, but only slightly. We have a good natter, it’s a small tattoo but hand-poking does take longer than a gun. I guess it takes an hour or so and I do stop play for a wee-break, where I spy it in the bathroom mirror and I feel genuinely happy that it’s there.

Once we are done, it’s a bit of cling film and the advice to use cocoa butter or coconut oil for a couple of week until it heals. If any of it “drops out” (with hand-poking some bits might not take), Lily offers free touch-ups and off I go… Although, no, before the cling film we do the optional (I’m happy to) social media snaps outside for good lighting.

I didn’t actually tell my husband I was doing it. I asked my brother to babysit my two-and-a-half-year-old, telling him I was at a “work thing”. Once it was done I was happy, but my main concern was others’ reactions. My mother-in-law has been known to point out tattoos on people with a shocked/disgusted expression.

My brother (not the tattoo kind), was okay. He sighed a lot, tutting in a kind of did-you-really-have-to? way. My husband loved it. I don’t think he ever thought I would go through with it (I wasn’t sure I would either), so it was a big surprise. Even my mother-in-law says she likes it. WAS IT WORTH IT?
As first times go, it was a success. Yes, I am that cliché and I do feel like I could go for more tattoos, but I won’t go mad, I have no designs on a sleeve. But now I know I can handle the pain of a stick and poke, why not do it again?

The kids (I have two), are very casual about my “drawing”. It’s really no biggie to have a first tattoo at nearly 40 and, if anything, I know more about myself and what I can live with on my skin that I did at 18. I mean, back then I might have gone for “Girl Power” or Damon Albarn’s face… neither of which would be that bad(!?), but I am pleased with my pipe and what it means to me.