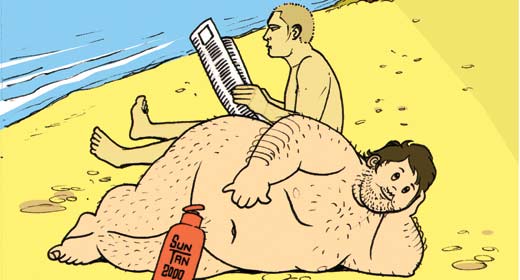 THE CONCEPT
Simple, we do stuff we haven’t done before and we tell you about it. Nick Coquet has been to the beach loads of times, but he’s always kept his pants on. Not today…

THE REASONS
When you tell outsiders about hanging around on Brighton beach, you’ll often get a knowing look and a snigger, like it’s all nudist here. So you say, “Oh no, that’s just a little bit of it up by the Marina, Of course, I’ve never been there, oh no. Perish the thought.” So with the public service remit of SOURCE Virgins in mind, I figured it was time I perished the thought and found out what people get out of sitting about on the stones with their bits hanging out.

THE EXPERIENCE
A morning in the SOURCE office under uncertain skies didn’t bode particularly well, but come lunchtime the sun was out and the clouds had cleared. With a rug under one arm, an Argus and a can of Stella under the other, I zig zagged down the esplanade, hopped over the Volks and made my way round the raised shingle that marks the naturist boundary. You can’t see anything from the rest of the beach unless you walk along the sea’s edge – it’s pretty secluded.

I looked around; there was no one close. The beach is only about a hundred metres wide, and there were a couple of blokes sitting at the other end, inexplicably clothed from what I could see. I laid out my rug and gingerly took off my clothes. The sun was pretty hot for the time of year; this was the first time I’d laid out on the beach this year under even normal circumstances. The first thing I noticed was the alien feeling of the sun on my cock. It hadn’t really seen it before but thankfully seemed to take this new sensation in its stride. I sent a lovely photo of my supine nakedness to the SOURCE editor to brighten up his afternoon, and settled down to read about local pensioner issues.

Almost immediately I was settled, I heard the scrunch of shoes on stones. I looked up and saw a big hairy guy lurching down the bank. Like I say, there was a hundred metres or so of specified beach to choose from, yet he parked himself almost conversationally close. He didn’t say anything though; he just peeled off his clothes and lay back with his own paper and a ciggie. What I did notice though, was those rubberneckers up the other end of the beach. Maybe hairy guy just wanted to keep away from them. They were properly interested in what was going on up our naked end. Craning to see is how I’d describe their posture. Like meerkats. I don’t know if they were expecting us to suddenly realise with a comic double-take that we were both naked and fall into a tumble of hitherto unrealised homosexual lust, but neither I, nor apparently hairy guy, had homosexual tumbling on our minds.

I’d heard that the nudist beach was a bit of a cruising hot spot – it didn’t seem too likely in broad daylight though. Perhaps I’m naïve – a minute later I did wonder. More stone shuffling and literally a couple of yards away from me on top of the bank a man plonked himself down, theatrically looking out to sea and up to the pier as if he hadn’t noticed at all these two naked men beneath him. He was fully clothed, no doubt perving at the lovely penises on display when we went back to our papers. It was a bit unnerving knowing he was sat behind me, hearing him singing to himself, but interesting to note that I didn’t feel uncomfortable – he was the one who was out of place after all. He may well have been some kind of a nutcase anyway, humming his crazy tunes.

So there we all were, two naked guys reading their papers like it was the most natural thing in the world, and three clothed guys, one admittedly of questionable sanity, the other two not quite close enough to tell. This was the bit I didn’t get. If you want to see naked men, you log on to the internet. It’s chock full of them. You can even see them having all kinds of sex if you want. But hanging around a naturist beach watching naked people read newspapers is either a peculiar kink to which I’ve not hitherto been introduced, or peculiarly pointless. I ignored them though and pretty much forgot they were there, bar this humming and singing the crazy clothed guy persisted with. It was proper sunbathing-warm, with just the slightest breeze fluttering through my pubic hair. I could get used to this. I’d planned to arrive, disrobe, get a general feel for what it’s like to lie about in the buff and then go home. But I had nothing pressing to do elsewhere, so I lay in the sun for an hour or so. When I got up to get dressed, crazy humming guy was still there, flicking stones about. I shot him what I thought was a quite recognisable ‘you cock-staring freak’ look, but it seemed not to register with him. Once I was back on the esplanade I looked back and he was gone. Not such a fan of big hairy men, obviously.

WAS IT WORTH IT?
Absolutely. It’s a little weird when there are more observers than participants, but this was early in the summer after all. It’s an odd feeling at first, especially when you know you’re being studied, but that wore off surprisingly quickly. It is, after all, the most natural thing in the world. I don’t know if I’d fancy the idea of chucking a Frisbee about or volleyballing in the nude, but lying about in the sun with no clothes on doesn’t feel odd at all. It feels good.