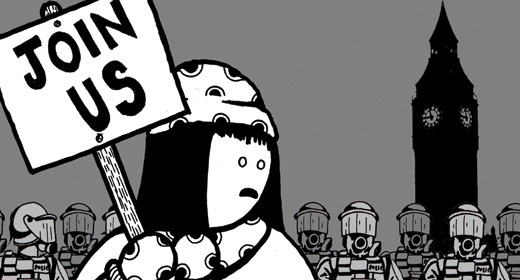 The resumption of Tory government in May last year has seen levels of civil protest rise again to 1980s levels. Sophie is 19 years old and wasn’t even born when the Poll Tax demos turned ugly, but recent announcements of drastic public service cuts made her take to the streets.

THE REASONS
I think people got complacent with government over the 13 years Labour were in power; some of my friends even said that the Tories getting in would at least galvanise people into action again, stir them up a bit. No one in my family votes Tory but I wanted to approach my own political leanings from a neutral standpoint – I did my research on party policy and started going to the Labour Party society at uni. I’m 19 and a student, so I’m acutely aware of the financial burden the cuts will create, but perhaps more important for me is the devastating loss of jobs in the public sector. I was a bit young for the massive anti-war demos of 2003, but now it was time I got involved.

THE EXPERIENCE
At the tail end of 2010 I went on two distinctly different protests. The first was an anti-cuts demo to coincide with the Tory Party conference at the National Indoor Arena, Birmingham, in October. I was the only Labour member on the bus up from Sussex; it was mainly Socialist Party members. They sat plotting chants for the day; ‘Let’s start a revolution’, ‘Call a general strike’. I kept out of all that to be honest. They’re fairly radical people but there was no hint of violence – the plan was just to march to the conference and make ourselves heard.

We congregated in a massive car park to start with – the crowd seemed to be mostly over 25s, listening patiently to speeches before we moved off. There were Chinese whisper-type mutterings going through the crowd, like “there’s 10,000 coming down from Sheffield,” but they never really materialised. We marched on to the National Indoor Arena, between 5-7,000 people we reckoned. I kind of expected more uproar, not violence necessarily, but it was all very peaceful. I found myself catching up with the Communist Party section of the march and deliberately held back; I didn’t want to be representing them.

There was a kind of anarchist element – I saw about 10 people with scarves over their faces. People reported after these demos about police brutality and over-reaction – I certainly saw this tiny element of the crowd isolated for a couple of hours by around 60 officers. They weren’t actually doing anything but you could say they maybe looked threatening. People around me were shouting about human rights infringements, but I guess if they looked like they were going to cause trouble it’s sensible to take precautions. I’d certainly say the police-to-protester ratio in this instance was way overblown, though.
It was really raining all day, which I think took a lot of the wind out of the sails of the protest. I was expecting it to last for hours, with sit-ins and stuff, but it kind of lost momentum and fizzled out. David Cameron did come to the window and watch us though, so who knows? Maybe some of it sank in.

It was all very different to the Millbank student protests a month later. The Birmingham march did get some media coverage but everyone saw this, for obvious reasons. My friend and I went on the march, which was very thoroughly policed – to the extent that people were just marching and feeling a bit powerless, that it was almost being suppressed by the authorities to avoid too much exposure for the students’ cause.
So when the march finished, there were all these NUS reps ushering people away down what I imagine were pre-approved dispersal routes. But there were others saying no, let’s go to Tory HQ. So we went along with the crowd to the courtyard outside Millbank; we arrived just as the windows starting getting kicked in. I wasn’t involved in any of the violence but I have to admit I got swept along with the chanting and the rising anger, to the point where we were waiting for the windows to go in so we could get inside. With hindsight I realise the implications of what that could have meant, the career implications of an arrest. But there was a definite feeling of being influenced by your surroundings, of moving with the pack.

It was all really exciting but I got a bit annoyed when the crowd started turning on the police, antagonising them. The violence with batons you saw on TV was very selective I think, they’re mostly just doing their job. We couldn’t really see what was happening. But the police are also part of the public sector and facing massive cuts of their own – we were shouting “Join us” to them, but they didn’t really listen…

WAS IT WORTH IT?
Yes, definitely. You can’t condone violent behaviour but you also can’t fail to see the difference in media coverage for the causes behind the protests. The reporting encourages more people to get involved next time – the effects of a protest aren’t felt straight away in that sense. I have to say I’d think carefully about joining a student-led demo again; it was certainly more exciting and satisfying to be part of but personally I preferred the values behind the more general cuts protest in Birmingham. Leaving uni with a massive debt is obviously not good, but it’s not quite as devastating as losing your job. I’m certainly planning on attending more protests, all different causes but still anti-coalition policies. People are starting to care more in general, I think – more people want to get involved, from a local level to nationally.

Sometimes an article is a bit of a team effort, and those are tagged SOURCE Writers. If you’d like to be part of that team, hit the Contact link at the top and get your work on this website.
← PREVIOUS POST
Street Style: Bradley
NEXT POST →
Take The Power Back
Mailing List
Recent Posts
Website developed in Brighton by Infobo
Copyright © Brighton Source 2009-2020
SOURCE Virgins: Protesting - Brighton Source