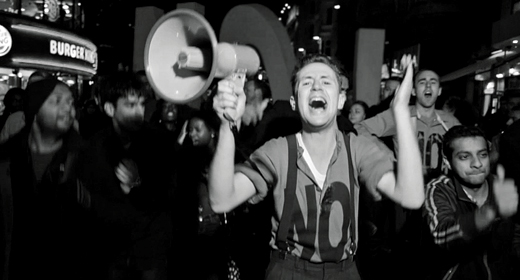 Take The Power Back

For years politicians have been moaning about the ‘apathetic youth’. Well, we bet in 2011 those MPs are looking back misty-eyed at the glorious old days when we all sat back and let them get away with murder while turning up our iPods and shrugging our shoulders. Because things have changed dramatically over the last year, and we’re now fired up to stand up for what we believe in. Between the student protests and the UK Uncut movement, the people shouting loudest that they’re not going take any more shit are a new group of protesters – passionate young people ready to fight not only for the things that affect them, but also for the things that they believe in.

Last year Derek Meins stopped being a self-proclaimed ‘famous poet’ and became The Agitator – a rabble-rousing blues singer who wanted us to ‘Get Ready’ to fight our corner. It turned out he was in exactly the right place at the right time. The month he released his debut single the coalition government crept into power with all sorts of plans to change the country. Derek was already fired up by the economic situation – bank bailouts and all that followed – before the policies were announced.
“It’s not just me that it’s happened to,” he stresses. “A lot of people who are around the same age as me, or younger even, have become a lot more politicised all over the country. A lot of it is to do with the economic state of things – well, that was the precursor to it all – but all the suggested spending cuts have only added fuel to the something that was catching on around the country anyway.”

Frequent – but not exclusive – singer of protest songs, Chris TT, meanwhile is an old hand at this, having been around long enough to know what Thatcherism means first hand. He’s extremely excited about what this new generation can achieve and has a pretty good idea of why so many SOURCE readers are so fired up.
“The difference between now and a few years ago is that many of the things we hold dear are genuinely under threat,” he says thoughtfully. “Even when there were things to talk about politically, our core stuff – music, being able to go out, being able to culturally express ourselves and to enjoy a rich range of things – tended not to be under direct threat.”
Now, he says, we live in an environment where – whether it’s a club full of bleeps and kids or an art exhibition – you’re seeing creative people, in high and low culture, fighting tooth and nail to survive. The things that people love might simply not be around if they don’t fight for them.
“If your taste is just X Factor, Strictly and Dancing On Ice then you’re safe,” he reckons. “But if your taste is even the tiniest bit more edgy than that – whether it’s alternative music of any kind, or you like an occasional trip to the theatre – then the current situation politically is going to massively affect your life.”

But what’s interesting is that most of the protesting is happening not just at a NIMBY (not in my backyard) level but is a principled campaign. Sure the students you see on TV are protesting against increased fees for students, but the planned massive personal price rise in education kicks in after they leave. They’re doing it for their younger brothers and sisters and the generation that’s following them. The baby boomers – who benefited from free education – might be pulling up the ladder behind them but the young generation today refuse to play that game. “And it’s a more powerful protest because of that,” nods Chris.

The positivity shines through the student demonstrations. With youth on its side the massive crowds are not ground down by having seen it all before – and seen it potentially fail. With a wave of support for them from outside the people that hit the streets, it all adds together to give a real feeling that the protesters can achieve their aims. There are people that aren’t involved, but that still cheer at every step of the way. It might not be reflected in the media particularly but it’s there.
“It’s massively important that people do show their interests and voice their opinions,” says Derek. “I don’t think it can ever be as black and white that a protest has failed or it’s succeeded. I think the fact that people club together, and go out on the streets and make a point of showing the people that are making these decisions that they care about these things they’re closing down is in itself is a success.”
“It’s amazingly impressive as an onlooker,” adds Chris. “There’s been 15 years of, not apathy, but quietness for student activity. Comfort. A lot of people marched against the Iraq war but what we all did was go on one march. It was huge, but it was very well organised and civil. The fact that we’re less than a year into the coalition government and they’re talking about using water canons on, effectively, teenagers – that’s a measure of how successful the protests are being.

“One hugely important feature of the new wave of protesting is the use of the internet. Facebook, Twitter, YouTube and blogs play an important part in both the organisation of demonstrations and the broadcasting of them afterwards. Chris points to how the student protestors avoided kettling by tweeting ever-changing meeting points that they ran between. Although they paid a heavy price at the next demo, they’re leaning how to beat the old guard with technology they understand better.
“The organisation of protests being done through Twitter and Facebook is a big part of why so many young people are becoming involved,” believes Derek.
“These things are popping up far faster and far more cleverly because of social media and the communication tools we’ve got,” confirms Chris.

Another place where the internet is proving to be really important is in informing the news. It’s no secret or surprise that in strikes and protests the media show a bias towards the authority position. Ask any sociology student. But now, with Facebook, blogs and Twitter, the first point of call for information isn’t necessarily from the old news sources.
“And now it’s far more difficult for the authorities to lie about what happened,” says Chris. “Because there are so many witnesses taking footage. We’re not just relying on the BBC and Channel 4 to show us a reporter who’s embedded on the police side of the lines. We’re seeing live reports, written reports and footage from within the protests.”
The perfect example of this is when Jody McIntyre was dragged out of his wheelchair by the police at a protest and the story was initially dismissed as a crazed myth. That was until footage from a fellow demonstrator got it onto YouTube and the media was forced to cover the story.

So what should you do if you are feeling like it’s time your voice was heard. Well, both Chris and Derek say the internet is the perfect starting point.
“The first thing is the reading and the listening,” explains Chris, who has spent years as a journalist. “If you’re interested in an issue do searches on YouTube. Some people are detaching themselves from the news because they’re upset by things but I think this is a really good time to not do that.”
Derek meanwhile suggests the Coalition Of Resistance website (coalitionofresistance.org.uk), which is meeting point for demonstrators all around the country, and 38degrees.org.uk which holds a lot of petitions.
“It’s worth following the student occupations on Twitter,” he suggests. “Click onto the UCL one and you can find all the people they follow themselves. There are loads of different protest and organisations that they always tweet about.”

But will you just be wasting your time? For a man in his early 20s Derek sums things up with exactly the sort of idea the old politicians used to say to the apathetic youth.”It’s massively important that people get up and do these protests and petitions as citizens in the type of democracy that we live in,” he stresses. “It’s one of the benefits of the system we live in.”

James Kendall was the co-owner and editor of SOURCE. He’s been a music journalist since 1992 and spent over a decade travelling the globe covering dance music for DJmag. He’s interviewed a range of subjects from Bat For Lashes, Foals and James ‘LCD Soundsystem’ Murphy to Katie Price and the Sugababes. He’s a keen photographer and has work featured in The Guardian.
← PREVIOUS POST
SOURCE Virgins: Protesting
NEXT POST →
Critic: February
Mailing List
Recent Posts
Instagram has returned invalid data.
Website developed in Brighton by Infobo
Copyright © Brighton Source 2009-2019
Take The Power Back - Brighton Source