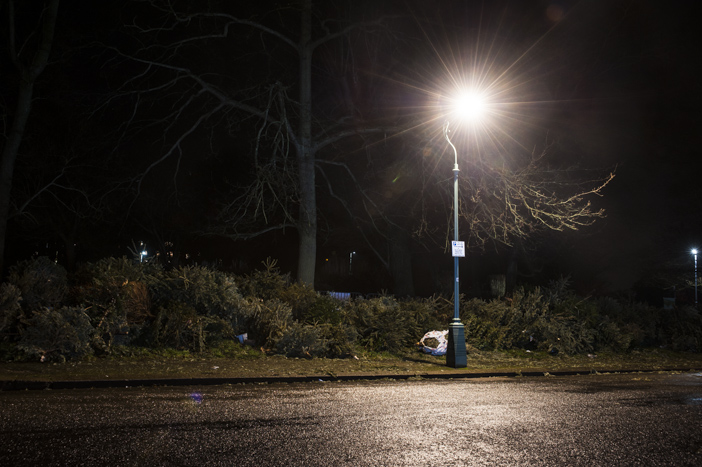 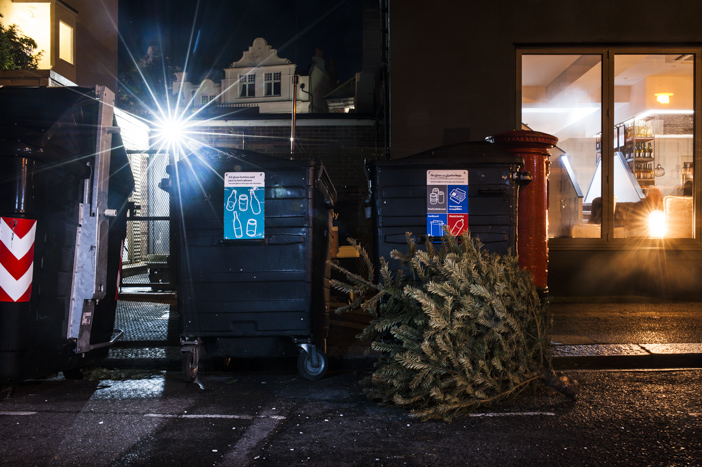 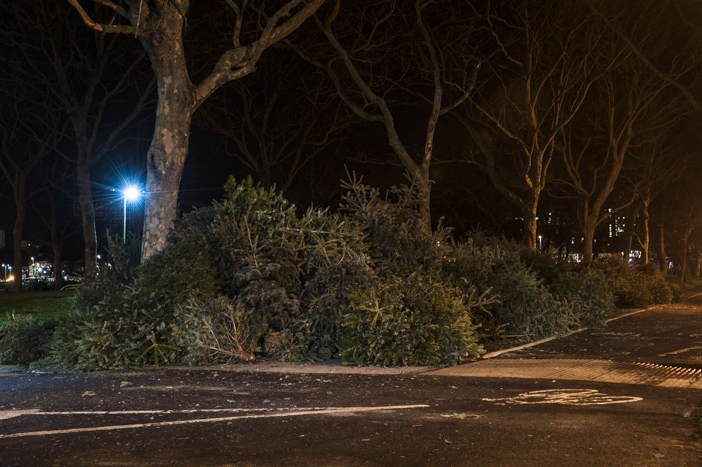 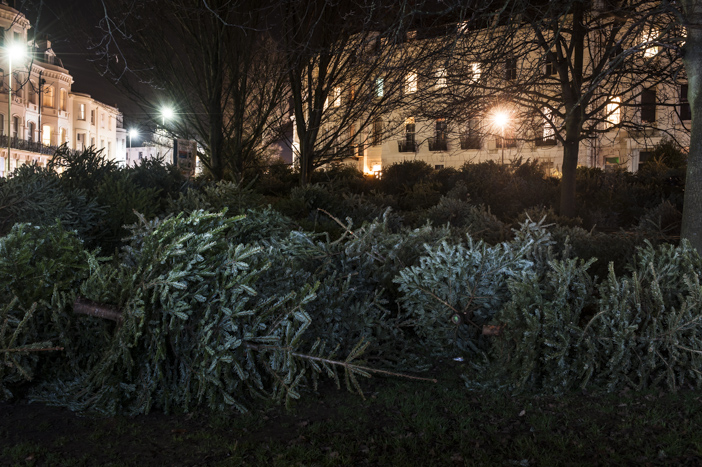 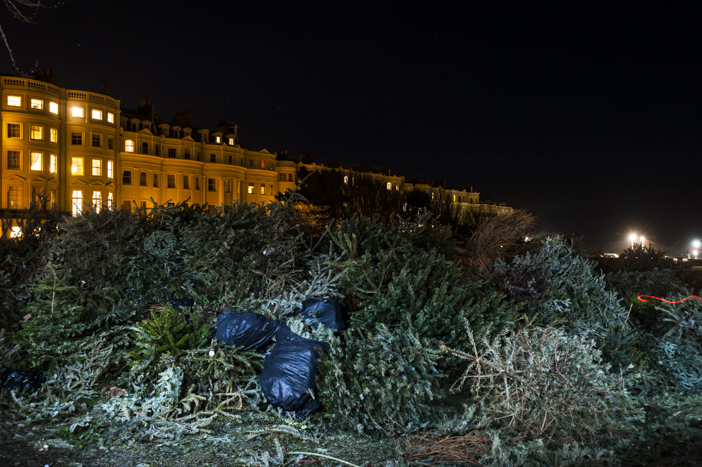 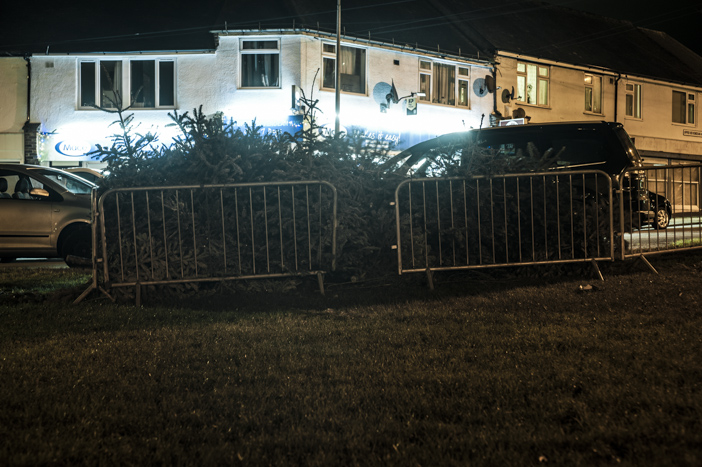 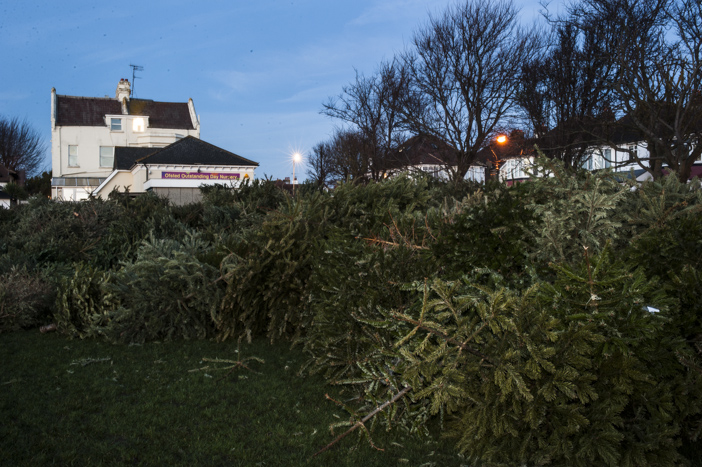 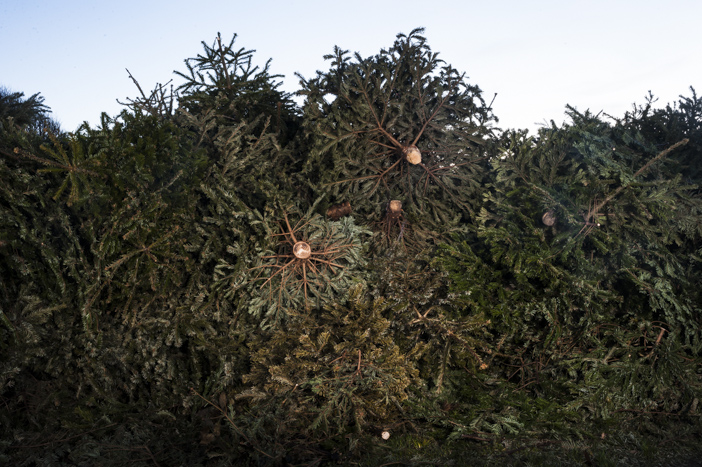 Street Source is a regular feature showcasing photos taken in Brighton. The idea is to share spontaneous moments around town – be it street scenes, snapshots of people’s lives or images of the city as a landscape. Each month we ask a different local photographer to participate. Here’s Francesca Moore’s document of January 2018.

Talking of bad luck, my original photographs were lost. Taken on film with a medium format camera, the camera and thus the photographs were unfortunately stolen the same night they were taken. All that remained from the series was the one test image below, shot digitally. 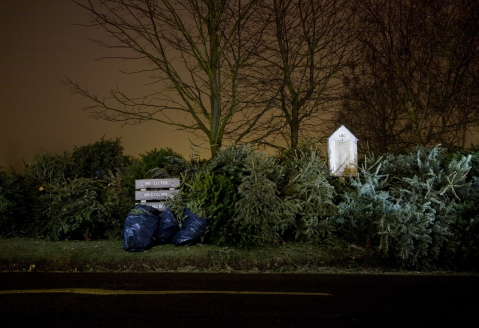 Revisiting the initial idea, I photographed a series of abandoned Christmas trees, at recycling points around Brighton. The council recycles the trees to create compost, which you can then buy back from them, thus avoiding thousands of trees being cast to landfill. There are over twenty recycling points across the city, and they become quite a spectacular in the dark, cold January nights.

It’s long been a Christmas tree debate, “What’s best for the environment, real or fake?”. This is a question I’d love to open up for comment from Brighton environmentalists, but according to the Carbon Trust there’re a few considerations. A fake tree, made of plastic from oil, has a higher carbon footprint that can eventually be offset, so long as you keep it for ten years or more.

If you go for the traditional pine you have to keep in mind that if it goes to landfill its decomposition will produce copious amounts of methane gas, which is more polluting than carbon dioxide. Whereas burning the tree, having it chipped or composted to spread on the garden significantly reduces its carbon footprint. In fact, burning the tree releases the carbon dioxide that was stored up when it was growing, effectively making it carbon neutral.

Some food for thought until the next festive season. In the meantime, why not grab some compost to spruce up your garden?

Francesca Moore’s passion for the performing arts has seen her photographing live stage events for the past ten years; shooting at intimate venues and major stage events for a range of editorial clients, and with the production of limited edition fine art prints. Her personal work stems from interests in people and the environment, where she draws on her scientific background to portray humanitarian, social and environmental issues. She began contributing to the SOURCE after a permanent move from London around the time the magazine was dropped for an online only presence. She’s assured there’s no correlation.
← PREVIOUS POST
Lord Huron Photos
NEXT POST →
Pride Tickets Sell Out In Minutes
Mailing List
Recent Posts
Website developed in Brighton by Infobo
Copyright © Brighton Source 2009-2020
Street Source No.23 - Brighton Source