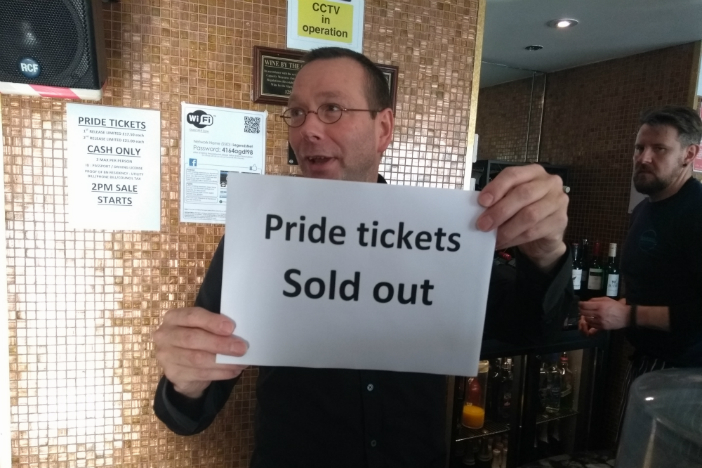 Pride Tickets Sell Out In Minutes

Thousands of Brighton Pride tickets designated for local residents were snapped up in minutes today, causing lengthy queues outside a sex shop, a charity shop and Legends Bar.

The batch of 5,000 tickets for the festival, which has witnessed a chaotic opening round of ticket sales following the announcement of Britney Spears as the Saturday headliner, went on general sale at the unconventional ticket outlets on Monday morning.

Some fans, monitored by a Pride steward, turned up an hour before opening to form a good-humoured queue between the entrance to the Sussex Beacon shop, on St James’s Street, and Bar Broadway on Steine Street.

Once inside, they were directed by a security guard to the sound of Spears’s debut album, ‘Oops!… I Did It Again’, and allowed to buy up to two tickets if they could produce identification and proof of a Brighton address.

While the Beacon reported selling a few hundred of its 1,200 allocation for the day by 10.30am, Nice ‘n’ Naughty, an adult shop further up the street, sold out its quota almost instantly. 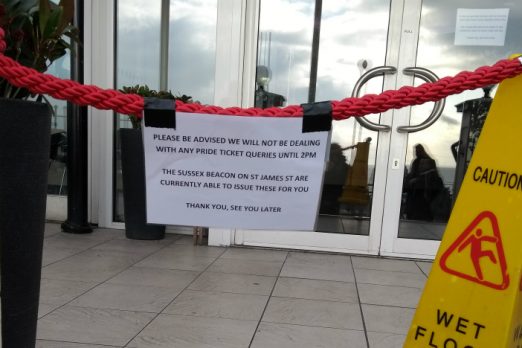 At Legends, on Marine Parade, organisers perhaps felt it was a little early in the morning to be inundated by expectant pop lovers. A sign advised visitors that no ticket queries would be entertained before 2pm, but the delay deterred no-one – by 2.30pm, anyone hoping for their Britney fix would have had to settle for the singer’s hits on the screens around the bar, with all the tickets already sold.

An unprecedented scramble for tickets has been punctuated by ticket site crashes and murmurings of disappointment since Spears was named at the top of the bill in January. The initial allocation of 10,000 tickets sold out in record time, and Pride organisers were criticised for their lack of communication when the festival website was unable to deal with demand during the second wave of sales last week.

Some secondary ticketing sites have advertised tickets, which were available for between £17.50 and £27.50 from the outlets, for as much as £150. An email from the festival said that more than half of the first allocation had gone to previous festival ticket buyers and local postcode holders.

More tickets will go on general sale at the Brighton LGBT Community Festival box office next week, and a final release will be made later in the year.

Spears’ performance will be the first of her UK tour, when she will perform her Las Vegas show, ‘Britney Spears – Piece of Me’.

Nile Rodgers and Chic will headline LoveBN1Fest, the second day of the festival in Preston Park.

Words and photos by Ben Miller.