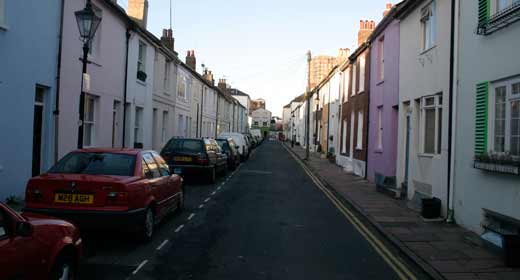 But isn’t it a bit noisy?
Strangely the North Laine gets very quiet after the shops shut. There’s hardly any traffic along most of the roads and Queen’s Gardens is on a little-used part of the overly complex one way system. Most of the streets have pubs close, but not in the middle of them.

Ah, pubs. What would be my local?
There’s a few to choose from (The Pond with it’s excellent Thai food, the calm Foundry) but with the Heart & Hand less than a minute away, we know which busted old jukebox we’re going to be pumping for rock’n’roll classics. It’s a great mix of cool bands and old school punters – the perfect place to grow hangovers.

Yes, hangovers. Going to need fry-up proximity then. Anywhere good?
Indeed there is. Breakfast At Tiffany’s recently got included in The Guardian’s guide to best breakfasts in Britain. They don’t do bonus chips but it’s still a mountain of food to get through. Interestingly, a Tiffany’s fry up stars on this month’s SOURCE cover.

That’s daytime grub sorted, but where can I get night munches and Rizlas?
Right at the North Road end is one of the oddest local shops in town. Rather than stuffing the place with 500 varieties of artery-clogging junk, Coco Vino choose their items carefully. Last time we were in there they had two varieties of biscuits and a handful of chocolate bars. There’s loads of space for them to set up their wine tasting sessions though. Local resident Midfield General is obsessed with the place, but if you want a wider selection, the shark shop, a couple of streets down, is a better bet.

So, can I even afford to live there? The North Laine is pretty sought after.
It’s full of students and shared houses, so if you’ve got friends you’d like live with, quite possibly. If you wanna get coupley, at least one of you is going to need to earn a bit of money (handy that the train to London is only five minutes away then). For shared houses, expect to pay about £450 each.

Sometimes an article is a bit of a team effort, and those are tagged SOURCE Writers. If you’d like to be part of that team, hit the Contact link at the top and get your work on this website.
← PREVIOUS POST
Club Review: Supper Club
NEXT POST →
Street Style: Martha
Mailing List
Recent Posts
Website developed in Brighton by Infobo
Copyright © Brighton Source 2009-2021
Streets Of Brighton: Queen's Gardens - Brighton Source