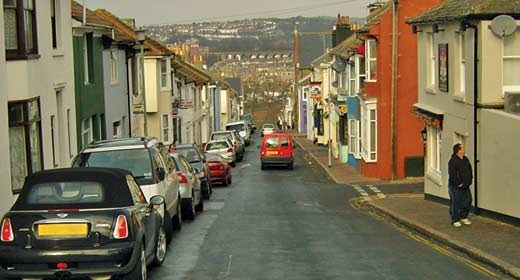 Muesli what?
Hanover is affectionately known as Muesli Mountain, because of the cartoony stereotype of its residents as Guardian-reading, muesli munching, yoghurt knitters. It’s only half true…

So who does live there?
Hanover has its own definite character, its residents are really proud of where they live. There’s a mixture of families, young professionals and there’s the halls of residence for the art college at the bottom. In the recent blizzards the whole area had an almost Dickensian feel to it, entire streets bunking off work and school and chucking snow about together.

Hanover’s full of boozers, isn’t it?
The area was originally more or less exclusively populated by railway workers, and apparently they had quite a thirst. Southover Street has five pubs we can think of, most notably the Pub With No Name at the top – very cool and far enough from town to avoid overcrowding, the Charles Napier – an old man’s pub in the very best sense, and the Dover Castle – resolutely avoiding the Stella wife-beater crowd with their eclectic on-tap temptations.

And on the way home?
Well, it’s a residential area, so the odd chip shop aside there’s not much choice. No kebabs unfortunately. Famous Moe’s Pizza is on Southover – good enough for soaking up a night out but not really a destination in itself. Sea Breeze fish and chips might be a better bet. But enough of the pubs do great food to not have to worry about the journey home, especially when home’s only yards away.

What about milk, bread and, er, Rizlas and Kit Kats?
There’s a convenience store here, but it doesn’t keep particularly convenient hours. Southover Wines, the off licence with the friendly young heavy metal dude behind the counter, might be a better bet.

All good. Any downsides?
Parking in Hanover can be a nightmare. The streets aren’t resident parking controlled and it’s generally a massive free-for-all with parking a couple of streets away a common occurrence. You’d only really need a car for the weekly big shop though. The houses tend to be limited to two bedrooms, and keen gardeners should probably look elsewhere. But overall, Hanover has more personality than most parts of Brighton put together, and Southover Street is pretty much the centre of everything.

Sometimes an article is a bit of a team effort, and those are tagged SOURCE Writers. If you’d like to be part of that team, hit the Contact link at the top and get your work on this website.
← PREVIOUS POST
Music Reviews: February 2008
NEXT POST →
Club Review: Floorplay
Mailing List
Recent Posts
Website developed in Brighton by Infobo
Copyright © Brighton Source 2009-2021
Streets Of Brighton: Southover Street - Brighton Source