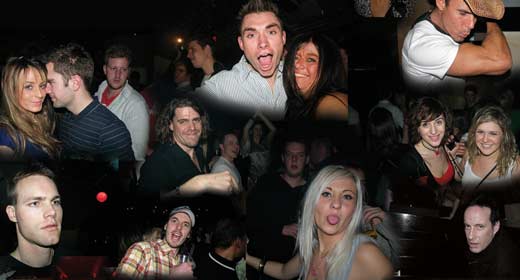 House music is dead. Everyone is talking about techno and electro these days while the uncelebrated sound of the 90s limps on. That’s the perceived wisdom, but Prok & Fitch are putting up a convincing argument to the contrary.

Despite being Valentine’s Day – a night more concerned with horizontal dancing than vertical – the place is rammed, with near standing room only on parts of the dancefloor. “It’s normally busier than this,” says Prok apologetically after the pair have come off the decks, leaving US legend DJ Disciple to capitalise on the chaos they’ve created. Not that the pair need a guest DJ to get the party started – most of the crowd are here to see Brighton’s most up and coming pair go back to back with their own tunes and chugging remakes of dance music classics given this year’s electronic edginess.

The good natured, dressed up crowd look healthy from either a winter sun break or a sneaky bit of fake tan. No one is getting sweaty on the dancefloor, or gurning too much, but there’s plenty of enthusiasm and loads of smiles. And why wouldn’t there be? P&F have been pegged as future stars – DJ Magazine were also down covering the night – and the people here are full of pride and excitement, feeling a little slice of Ibiza on Brighton’s cold beach.

And they’re probably relieved that although they aren’t spending the evening having a romantic dinner, at least they didn’t have to queue around the block this month. Normal service will be resumed in March no doubt.

Sometimes an article is a bit of a team effort, and those are tagged SOURCE Writers. If you’d like to be part of that team, hit the Contact link at the top and get your work on this website.
← PREVIOUS POST
Streets Of Brighton: Southover Street
NEXT POST →
Demos: February 2008
Mailing List
Recent Posts
Website developed in Brighton by Infobo
Copyright © Brighton Source 2009-2020
Club Review: Floorplay - Brighton Source