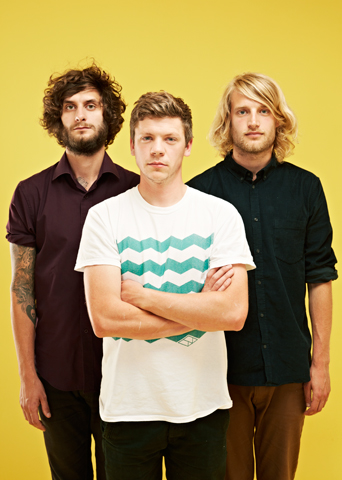 Tall Ships are a confident band. Not arrogant, just quietly sure that they can do things right if they put in the graft. Take the last song on their long awaited, long worked on debut album ‘Everything Touching’. ‘Murmurations’ is a nine-minute song that takes two thirds of that time to really find its stride, but when it does it’s one of the most joyous songs to come out of Brighton this year.

A light electric guitar flutters around a simple four to the floor kick drum and it’s three minutes before we even get any bass. But if you hang in there for as much time again, the emotive track builds as the drums arrive. A choir of over 30 friends, family and fans sing their hearts out from seven minutes and you wonder if the hairs on the back of your neck could stand up any more straight. It is – if we try to keep calm about things – an absolute masterpiece.

“It’s the most Tall Ships song we’ve ever done,” says singer and guitarist Ric. “When we started we used loops, which by their very nature constantly go round. You repeat yourself and put it on top and ‘Murmurations’ is sort of the ultimate result of that. We wanted to get as many people on that track as possible so I think there’s about 40 or 45 people on there. I mean, 30 people in the choir that sing at the end and us guys playing instruments.”

To add to the feeling, they recorded it in their old primary school, but emotion isn’t all Tall Ships have got. The title ‘Murmurations’ refers to the patterns that flocks of birds make when they fly in and out of each other. You know, like you see starlings doing over the pier twice a year. It perfectly suits the way that the instruments and singing weave in and out of each other. So, yeah, they’re clever boys. Previous single ‘Plate Tectonics’ and album track ‘Phosphorescence’ – alongside ‘Ode To Our Ancestors’, which offers the compliment “You are a triumph of natural selection/ Every mutation leading to your perfection” – show that the science extends beyond the complex and clinical elements of their indie rock.But as intelligent as all this is, it comes straight from the heart. When asked what his favourite song on the album is, Ric offers ‘Oscar’, a hard-edged, crunchy ballad.“Lyrically it’s the song that means the most to me,” he says. “It’s sung about someone who is very important to me and I love to perform it because I can completely lose myself in it. It’s just about that very pure feeling of when someone you love very much is hurting, and that kind of feeling where you’d just do anything for them.”
Not only does Ric like to lay himself on the line personally when he sings the song, he enjoys performing it most when the person the song is about is there in the crowd to sing it to. It’s a pretty brave way to be on stage.
“I think there’s nothing worse than vacuous lyrics,” Ric says with passion. “I think there’s a worrying trend at the moment in a lot of music where lyrically it’s all kind of empty, and singing about stuff that doesn’t mean anything to them. Every word I sing I believe in. If I didn’t believe in it then I just wouldn’t sing it.”
That means the whole album is about real people the band know, real places they’ve been and their own emotions. It’s a hugely personal piece and that shows in the performance. ‘Everything Touching’ is very aptly named.

This self-assuredness – doing things their own way, the right way – meant they were also confident enough to turn down the SOURCE cover last year, during the Seamonsters festival, preferring to wait for this moment when their album was ready to release. It turned out to be a wise move, as even without us thrusting their features into 60,000 readers’ faces they still sold out their gig faster than any of the other bands at the Brighton round up.
“We were quite surprised by it because they did a whole week of that festival,” says bassist Matt. “We were completely baffled by it all, just to see how many people were in there. It was amazing.”
Happily notching up the tickets sales since then, the next step is headlining The Haunt next month.
“It feels like a step up,” admits drummer Jamie. “I’ve been to a couple of shows there but normally go for the It Is Still 1985 80s night, so it will actually be quite funny playing there.”
It comes after some amazing gigs, as far away as Brazil and New York (for the CMJ festival), and including tours with Metronomy, 65daysofstatic and We Are Scientists. Oh, and they played Bestival last year too.
“We’re very lucky as a band that we’ve been offered a lot of support slots,” says Jamie. “Through them we’ve played a hell of a lot of shows and got to where we are now. Through actually playing directly to people, they connected with us, because our recorded material previously I don’t think has ever really lived up to what the live experience is like.”

One of the most important bands they’ve played with is Tubelord. Tall Ships supported them on their first ever gig and Tubelord were impressed enough to take them under their wing. They took Tall Ships on tour as their support, produced their records and tour managed them.
“They’ve actually been quite fundamental in our development as a band,” says Matt. “That’s one of the great things about being in this band. Everyone we work with, we’re very close to. From Harriet who does all our artwork, to our managers, we’re all very close.”

Clearly that suits the band well. The people that murmurate through their lives have helped Tall Ships make one of the most emotionally arresting albums of the year.

Photo by Kenny McCracken at Create
Assisted by Matthew Ring

James Kendall was the co-owner and editor of SOURCE. He’s been a music journalist since 1992 and spent over a decade travelling the globe covering dance music for DJmag. He’s interviewed a range of subjects from Bat For Lashes, Foals and James ‘LCD Soundsystem’ Murphy to Katie Price and the Sugababes. He’s a keen photographer and has work featured in The Guardian.
← PREVIOUS POST
Frank Fairfield Review
NEXT POST →
At The Edge Of The Sea Review
Mailing List
Recent Posts
Website developed in Brighton by Infobo
Copyright © Brighton Source 2009-2020
Tall Ships Interview - Brighton Source