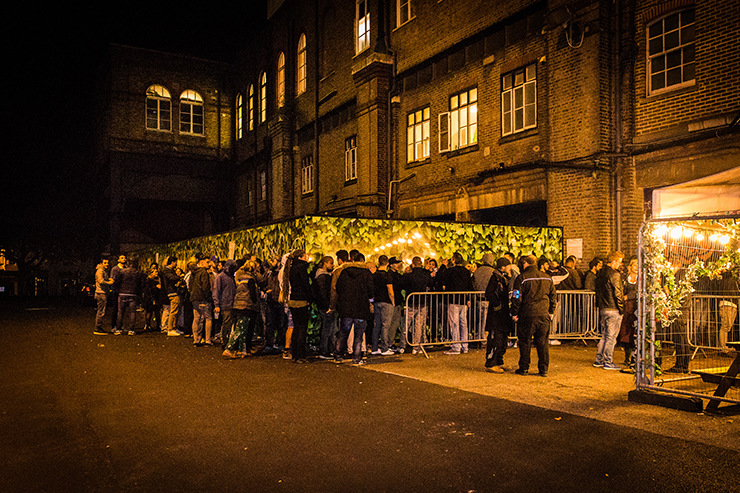 For a city renowned for its vibrant music scene, it is remarkable how many problems venues have faced over recent years. Sticky Mike’s Frog Bar closed at the start of last year because there were simply “too many issues” to make continuing to run the bar a viable option. Before that, both the Blind Tiger and the Freebutt were forced to close because of alleged noise issues. Now, with COVID-19 forcing every venue in the city to close, the city’s live music venues face their most serious challenge yet.

Many of these grassroots venues operate on thin margins at the best of times, so the fear is that the temporary closures might become permanent. Given the fact that Brighton is home to many music establishments, including one of the British and Irish Modern Music Institutes (BIMM) and the Greater Brighton Metropolitan College (The Met), this would be disastrous. It is vital for their young musicians – and for Brighton itself – that there are places for them to play.

SaveOurVenues, a national campaign, has been launched by the Music Venue Trust as an attempt to secure the future of live entertainment throughout the country. The Trust estimates that of the 670 independent UK music venues they represent, 556 of them are in imminent danger of being permanently closed. Among these, in Brighton, are The Old Market, Hope & Ruin, Brunswick, Latest Music Bar, Komedia and Green Door Store, all of which have signed up to the campaign. We, at SOURCE, decided to look more closely at the situation, and started by contacting Paul Seivewright of the Green Door Store to find out a little more about the club and how it is faring. 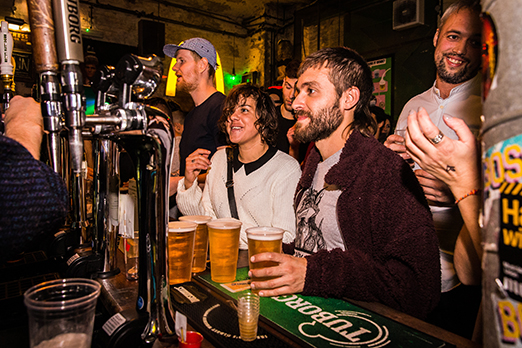 Paul and his wife, Ambre France, first discovered the empty units under Brighton railway station through a couple of illegal raves. Realizing that the arches could be the perfect venue for the club they envisaged, they leased the properties, did them up, and the Green Door Store was launched on 6th January 2011 (we interviewed them at the time for our Unsung Heroes series). To help secure the lease, they had initially proposed that the venue would be a blues/jazz club: once the club was up and running, however, it soon developed a reputation for putting on the most eclectic mix of music anywhere in the city, seven nights a week.

The first time we headed down to the place was to catch American singer-songwriter E.M.A. promoting her debut album, ‘Past Life Martyred Saints’, the gig being the first of her British tour. This has become quite a feature of the place, with international artists choosing to play the Green Door Store either at the start or the end of a gruelling period of time on the road. US acts like Moon Duo, Perfume Genius, The Delines, Caspian and Gaelynn Lea, we’ve caught them all at the Green Door, often before their careers really kicked off. And it hasn’t only been American acts. We’ve seen an astonishing number of top acts from all over the world, among them Awaydays (Turkey), Fufanu (Iceland), Holydrug Couple (Chile), Julie’s Haircut (Italy), Shortparis (Russia)… 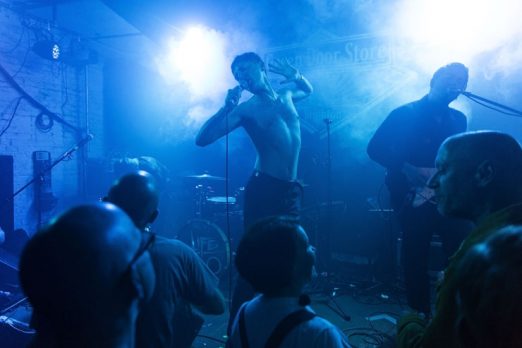 In addition, a diverse range of British bands have also been spotlighted. The Blue Orchids, Electric Soft Parade, Here We Go Magic, Fanfarlo. Chichester band, TRAAMS. Carlisle’s Lucid Dream. Hull’s LIFE. London’s Jo Quail. Norwich’s Sink Ya Teeth. Manchester’s DUDS, TVAM and WH Lung. Plus, last November – up there with the best of gigs for 2019 – the unique techno-metal thrash of Bristol’s Scalping. Sometimes it seems that the Green Door Store is punching above its weight, the quality of bands, both national and international, is so high. Yet the place never forgets that it is a Brighton venue, its remit also to nurture Brighton-based bands who are just starting out. As Paul Seivewright confirms, “We have a great relationship with our local music university, BIMM… We have roughly 25-30 BIMM events annually.”

Many Brighton acts have indeed started off on the small Green Door stage and gone on to much bigger things – and we at SOURCE have been there to report on a huge number of them. Apart from Electric Soft Parade, plus solo performances by the band’s joint-founder Thomas White, there was CLOUD, and Red Deer People, and Kudu Blue, and Frank and Beans. And more recently Porridge Radio. And Squid… The list is long and impressive and, thanks to the admirable ethos of the club, which is prepared to put on free evenings to showcase the vast wealth of new local talent, one that is continuing to grow. Over the past year we’ve caught some incredible acts, any of which could also take off. Dog of Man, The Dagobah Sisters, Our Family Dog, Swanmeat, Hanya… 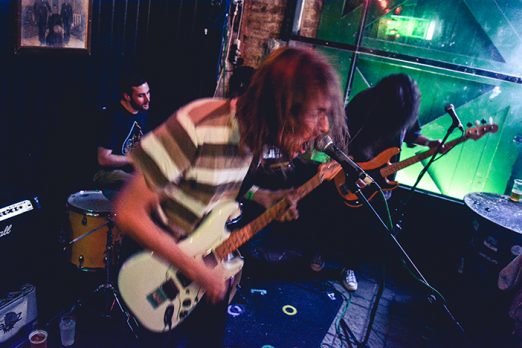 The fallout from the current lockdown is already having its effect on up-and-coming bands. We were looking forward to seeing five-piece Peterborough newcomers, Lonesome, at a free gig on 27th March – but the virus put paid to that. Their EP, ‘To Myself, From Myself’, which can be heard on Bandcamp here is a little gem. Although it wasn’t guaranteed, we were expecting to be able to post a positive review of their live performance on SOURCE. Obviously that review never happened and, with their entire tour on hold, this is one post-rock/shoegaze band’s musical journey that has been seriously compromised.

It isn’t only rock in its various incarnations that the Green Door Store promotes. Paul and Ambre might only have mentioned jazz to help them secure the lease, but since opening, the place has regularly put on cutting-edge acts, from free-jazz saxophonist Peter Brötzmann to the improvised vocal noises of Thurston Moore.

There are also regular soul nights, blues nights, 80s nights, reggae nights, hip hop and drum’n’bass: every music taste is met – even the furthest outreaches of experimental electronica. One memorable show, part of the regular Splitting the Atom evenings, included the punching in of a number code into our iPhones which, when raised in the air, emitted a buzzing choir of pulsating sound. Plus, of course, there are all the late-night events, including the ‘Berlin’ nights organized by DJ Markus Saarländer, where the likes of Timo Maas and Einmusik have mesmerized sell-out crowds with banging house and techno. 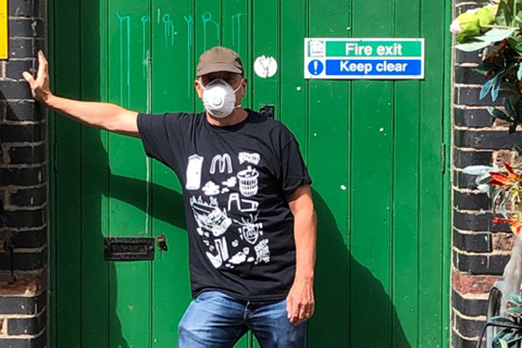 The author, taking precautions while waiting for the venue to open

The Green Door Store, then, is self-evidently ‘a good thing’. It brings in talent from all around the world, from every corner of the UK, while also helping young Brighton-based talent to thrive and prosper. It serves up an enviably eclectic mix of sounds in early evening shows, late night slots and occasional all-day events. It is a small, funky venue with a dedicated and friendly young staff and its closure would be a tragedy for the city.

It is, of course, impossible to know how long this lockdown will continue. Nathan Fake, whose gorgeous ambient/dance electronica has been on our radar for several years now, and who was due to play at the club in April, has had his gig put back to 13th September. We’ll certainly be there if the gig does take place. And then of course, there’s 6th January 2021. On that date, the Green Door Store should be celebrating its 10th anniversary. To ensure that this milestone is met, the club has not only been signed up with SaveOurVenues, but through Twitter is also trying to raise money by selling T-shirts and tote bags specially designed for the purpose (get them here).

In these “strange and challenging” times, we at SOURCE wish them – and every other amazing live music venue in Brighton – all the very best for the future.

Paul Stewart is an author - mainly novels for kids - but his main love has always been live music. These days, the words that fill his head at gigs often turn into reviews for Brighton Source, the going-out bible for his favourite city anywhere, ever.
← PREVIOUS POST
Gig Buddies Coronavirus Festival
NEXT POST →
Snog, Marry, Murder: local author's new crime novella