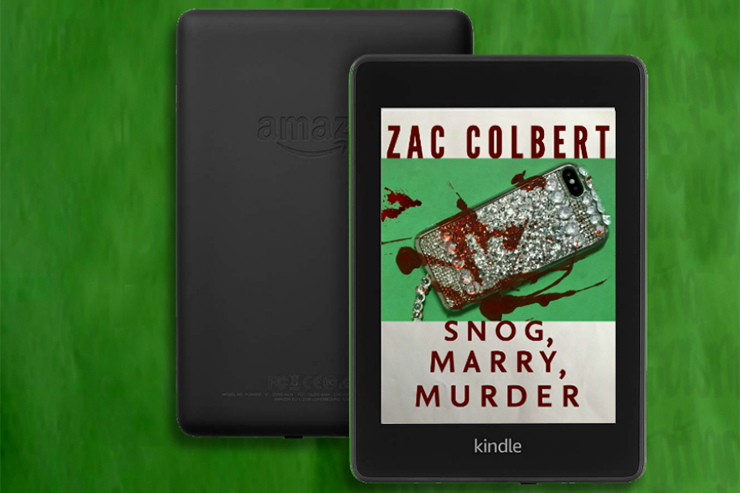 Charlotte, a peppy young production assistant for a low-end reality TV show, spends her spare time absorbing classic murder mysteries. When a murder suddenly happens on her own set, she springs into detective mode and gets to work finding the killer. What’s being hidden by the catty presenter and the untrustworthy producer? Can the thuggish boyfriend be placed at the scene by a half-eaten packet of crisps? Who’s upsetting the nervous make-up artist? Charlotte’s investigations unlock a series of secrets, including, eventually, her own.

Snog, Marry, Murder is the new crime novella by Brighton-based writer Zac Colbert. By blending elements of typical crime novels with reality TV clichés and a delightful way with words – “pretty, in a soft cheese kind of way” – Colbert creates a story that is fun, self-aware, and keeps the reader guessing. The author’s years of experience in TV development gives him an insight into the environment which makes it feel genuine and believable, and it’s a modern take on the locked-room sub-genre of crime which has had an enduring appeal for decades. Though it doesn’t shy away from stereotypes, and setting crime tales on reality TV sets isn’t new – see Ben Elton’s Dead Famous, for example – it’s a light, enjoyable romp of a story.

Colbert’s first novella could accurately be described as ninety minutes of pure escapism, or a perfect holiday read. As we approach a summer that’s likely to be devoid of both light-heartedness or holidays, it’s the perfect choice for a bit of escapism, which will keep the reader engaged until the very end.

Snog, Marry, Murder is available to buy for Kindle here and is free to download until 1st May.