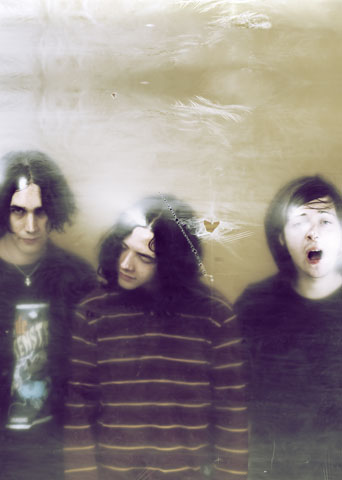 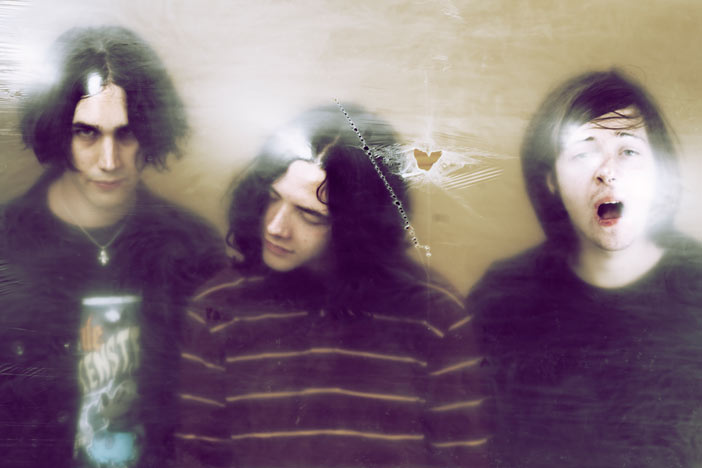 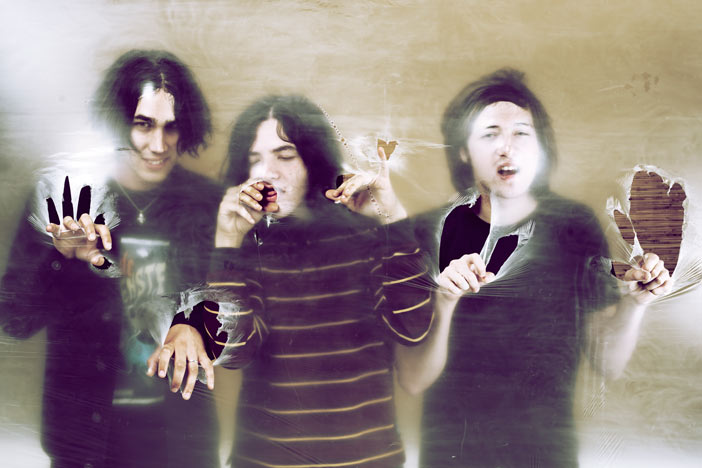 If you read a lot of the music press, you’ll surely have some thoughts about The Wytches. Firstly you’ll be extremely excited about their muscular noir-psych garage (or surf-doom, as they prefer to call it) and their intense live performances. Plus you’ll also probably picture them as dark and moody.

But what no one has mentioned is that they’re actually a lot of fun. Still young enough to live the rock and roll life with the dedication that it deserves, one of them wanders into our photoshoot and quickly locks down the location of the toilet because he “might puke up”.

“It was my first night in Brighton for a month and I’m really hung over,” drummer Gianni says, before throwing himself into the shoot with the enthusiasm of someone who popped out for a run and a wheatgrass shot at 8am.

From there, talk turns to a night in Lincoln that started with Gianni having sex with a girl in a lift and ended with one of their mates pissing in a hoover and throwing it out of the window. That hardly fits with the dour, moody band that everyone seems to want to paint them as. Hardly an interview goes by without the phrase “We hate…” popping up, and while they’re happy to lay into anything that doesn’t impress them, The Wytches are far from the angry young men that people want to portray them as.

“The music does get pretty intense,” admits the likable Gianni, “but we don’t take ourselves too seriously. We’re a band at the end of the day and it’s supposed to be a laugh. We do have a laugh most of the time.”

Kristian has simply stopped reading their press now, no small feat when they’re popping up everywhere from This Is Fake DIY to The Guardian and, on the morning of our interview, the NME.

“I’m just bored of intellectualising,” he scowls, “it’s so boring. Just do something. Stop talking. People like the sound of their own voices. I think how we get written up sometimes puts us off a bit, it’s always talking about how dark it is, and how dark we are. It is dark music but as people we’re not going out stabbing chickens and sitting in graveyards. It’s just good music. We’d like to be written about as a band who makes good music rather that how spiritually orgasmic it is.”

Kristian and Gianni arrived in Brighton from Peterborough in late 2011 to go to university “for the money”, which these days seems like a odd plan, but they reckon it freed them up to concentrate on the band. And concentrate they did – clocking up 80 gigs in 2012 with no agent to help out. For anyone that’s heard the surf garage gem that is ‘Beehive Queen’, it would be easy to think that they were an overnight success.

“We didn’t come out of nowhere,” snaps Gianni before quickly calming down. “We were building gradually from the start. We never really overplayed Brighton, which was good. We definitely did with London but now we’ve taken a big step back from it.”

“We’ve been playing non-stop,” says Kristian, “it’s not like we just appeared. We were playing literally anything. We’d do some show with a juggling act as the headliner, just because we wanted to play.”

Any bands wanting to know what it takes to succeed might be interested to hear the lengths The Wytches would go to play a gig. They travelled all the way to London to play for £15, did a four day tour on the Megabus, with all their equipment, and went all the way from Peterborough to Blackburn for £50 and no one turned up. At least when they played Tramlines – a gig they consider one of their best – the festival were so impressed they upped their fee from £15 to £50, money the trio spent on vodka. So now the hard work is paying off…

“In the sense that we have a van and people that know about us, yeah” says Kristian.
“We ain’t even started yet, don’t worry,” adds Gianni.
“We’ve got a busy few months,” says easy going bassist Dan. “Our agent understands us and knows we just want to be playing as much as possible.”

This means six dates with Superfood, some gigs with Splashh and Charlie Boyer, and a tour with Metz, which, according to a fired up Gianni, “is gonna be fucking sick”. That’s about 25 shows in the next couple of months, at which point they hit Europe.
How comfortable they feel on stage is reflected in their recording, which has mainly been done with Liam Watson at his famously retro studio Toe Rag, the combination that made The White Stripes’ ‘Elephant’ such a compelling record.

“You can’t go wrong with Toe Rag,” says Kristian. There are limitations because you’ve only got eight tracks. But limitation is very important – some people want to add too much. It sets you up for disappointment really – going to play it live and you haven’t got everything there. It helps us get it down as truthfully as possible.“

“We do all the instruments live as well,” explains Gianni. “All three of us together. Unless you’ve got good songs you’re not going to sound good in Toe Rag.”

But it’s not all about Liam Watson. If you’re quick you might be able to grab a copy of their new self-produced doom tape. Highlight ‘She’s So Far Out’ is a slow-grinding track, all screamed vocals and heavy chords that sounds like the soundtrack to your worst nightmare. Obviously it’s ace. The guitars still churn like more typical Wytches tracks but it shows that when they go all ‘In Utero’ on us they’re still gonna be great.

Before that, if the NME is to be believed, The Wytches are ready to leave Brighton.
“They said I hate Brighton,” Kristian says of that morning’s interview, “but I didn’t really say I hated it, I said I’d prefer to be somewhere a bit bigger. I said it felt a bit claustrophobic.”
“Just for the record I fucking love Brighton. I’m here for the long run,” says Gianni.
“I’m staying here,” Dan adds.
“He’s got a place,” Gianni says nodding to Dan, “I ain’t, but hopefully soon.”

Talk turns to renting a floor of an office building.
Gianni: “What are you gonna do if you want to have a wank though?”
Kristian: “Just put on music. I’ll stare at you.”
Gianni: “Don’t do that. That’s the worse thing you could do.”

James Kendall was the co-owner and editor of SOURCE. He’s been a music journalist since 1992 and spent over a decade travelling the globe covering dance music for DJmag. He’s interviewed a range of subjects from Bat For Lashes, Foals and James ‘LCD Soundsystem’ Murphy to Katie Price and the Sugababes. He’s a keen photographer and has work featured in The Guardian.
← PREVIOUS POST
Shakedown Review
NEXT POST →
Natalie Lloyd, Unsung Hero No.46
Mailing List
Recent Posts
Website developed in Brighton by Infobo
Copyright © Brighton Source 2009-2021
The Wytches Interview - Brighton Source