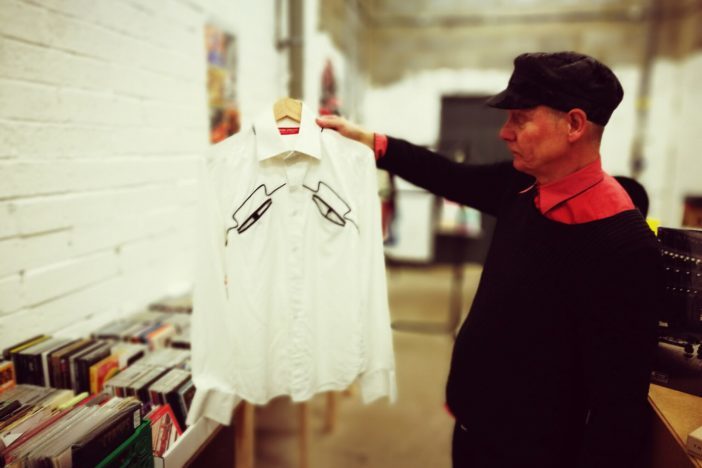 We’re always excited to hear about a new record shop. Brighton Vinyl Emporium, located at the Level end of the Open Market off London Road, is so new they haven’t finished painting the walls yet. The sign outside still says “Party Perfection”.

There’s been a lot of hype this week about vinyl sales overtaking digital, and it’s good to see new places helping to fill the vacuum left by the likes of Rounder and Borderline (sniff). This one is owned by Peter Smith, who already runs the Open Market’s Vinyl Market on Thursdays. He tells us he’s surprised at how much business the shop has already done, even though it’s not officially open until Christmas Eve.

“We’re still decorating at the moment,” he says. “But eventually we’re gonna have listening booths at the back, like in the old Virgin shops, and a sofa to drink coffee on.”

They’re also planning to sell vintage clothing. But this is no ordinary gear. Pete shows us a shirt that once belonged to Johnny Thunders (see pic) and a Vivienne Westwood top from 1977. As you’ve possibly guessed, Pete’s stock is currently dominated by punk, proto punk and new wave/indie from the 70s and 80s – all second hand stuff. “Punk’s my area, but to be honest that’s what most people seem to want at the moment anyway,” he says.

The grand opening will be at 9am-2pm on Christmas Eve, with Champagne and canapes, plus… 25 percent off the records, yay! There might also be an in-store, with Johnny Moped mooted as a possibility. Scoot on down there if you can.

Words and pictures by Gary Rose

A magazine journalist and former BBC minion, Gaz's words can be found in publications ranging from The Radio Times Guide To Films to 1001 Songs You Must Hear Before You Die, as well as on his blog The Wine Ninjas . He plays drums in a psych band, and once fell into a frozen lake in Transylvania.
← PREVIOUS POST
Thylacine Night at ONCA with Cathy Davey
NEXT POST →
Snow Dogs Under The Hammer
Mailing List
Recent Posts
Website developed in Brighton by Infobo
Copyright © Brighton Source 2009-2020
Brighton Vinyl Emporium, At The Open Market - Brighton Source