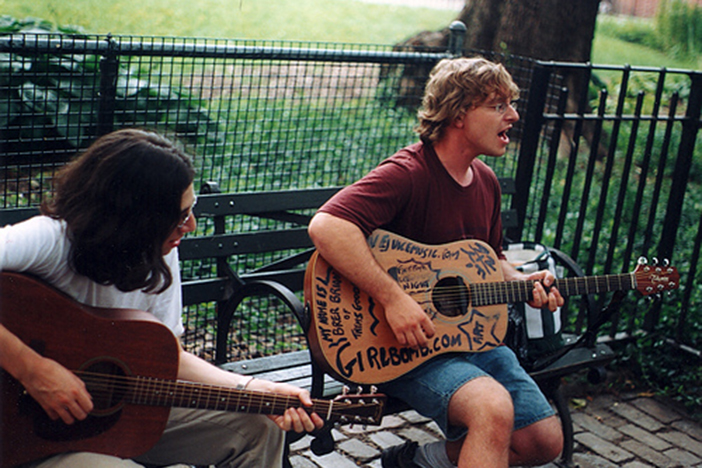 When antifolk became the torchbearer for a kind of mutated punk ethos it came with an attitude that championed music that was decidedly weird and rough around the edges. It also grew out of a community that spread much further than the confines of the original New York scene. That people like Jeffrey Lewis and Kimya Dawson can pack out mid-sized Brighton venues whenever they come to town suggests the mainstream plucked out their favourites and moved on. So what happened to all those antifolksters who were just a little too weird or rough to cross over? What happened to the idea that tuning up was not just an unnecessary prelude to a show, but part of what made it special?

The short answer is they never stopped. Brer Brian appeared on Rough Trade’s first antifolk compilation and was signed to US label Olive Juice Music, having strummed his merry way around the East Village scene since 2000. Burying an unmistakable melodic knack beneath a clatter of homegrown sounds, Brer Brian tops off his tunes with quirky words and the occasional foray into slide guitar. This month the New Yorker comes to Brighton as part of a mini antifolk showcase at Marwoods.

The night is put on by Filthy Pedro, founder of London Antifolk Festival, who has now moved to the coast to further the cause. He’s playing a set alongside some like-minded Brighton acts including singer-songwriter and actor Larry Pickleman and scarecrow troubadour Dennis Scunt. Local acoustic trio Boy in the Cupboard rounds off the bill with a peculiar mash-up of gypsy and indie styles with wry offbeat lyrics. Find out what antifolk did next, all for free.

Sometimes an article is a bit of a team effort, and those are tagged SOURCE Writers. If you’d like to be part of that team, hit the Contact link at the top and get your work on this website.
← PREVIOUS POST
Artwave Festival, 19th August – 3rd September
NEXT POST →
Drunk With My Friends Review
Mailing List
Recent Posts
Website developed in Brighton by Infobo
Copyright © Brighton Source 2009-2021
Brighton Antifolk Summer BrerBQ, 16th Aug - Brighton Source