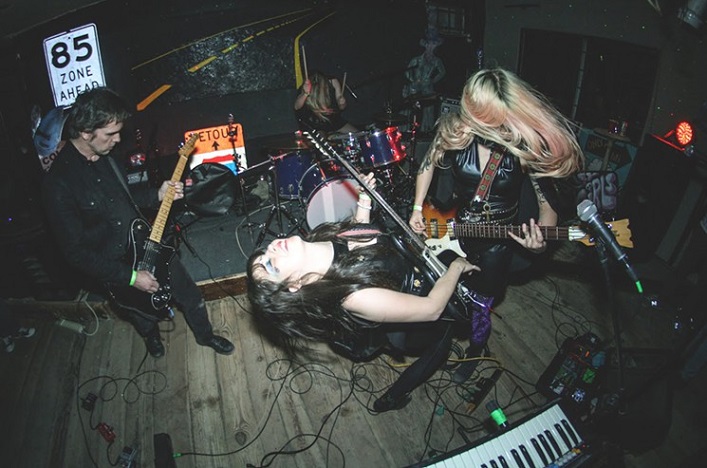 Advocates of all things neo-psychedelic Acid Box Promotions (behind the sold out Lewes Psychedelic Festival pre-party coming up at the end of January) are onto another winner, having snagged Los Angeles’ gloom garage outsiders Death Valley Girls for their debut gig at The Hope & Ruin in February.

“It’s a man’s world,” states lead singer Bonnie Bloomgarden on ‘I’m A Man Too’, a rousing anthemic track from ‘Glow In The Dark’, released last June on Burger Records. And it must seem depressingly so for a lot of young ladies, what with a proclaimed pussy-grabber somehow ending up president of the USA. She then asserts (as the song title indicates) she’s a man too, blurring gender boundaries with brash jagged guitars and irresistible clap-along refrains. Women can produce a 10-track punk record sashaying between the same two and three chords just as well as the boys. And in killer heels.

This is partly why local feminist collective Bitch Craft have lauded them – that, and the fact Death Valley Girls create a sultry blend of blues, psych, and rock’n’roll that struts and screams its influences – B-movies, Bettie Page, UFOs, Black Sabbath, The Cramps – with a sideline of venomous licks, feline gurgling of twisted 60s melodies, and persuasive, bone-rattling percussion.

Fans of the Yeah Yeah Yeahs, X-Ray Spex, Queen Adreena, The Runaways, and Deap Vally will lap these up. Death Valley Girls are complemented by cinematic East London psych-goth rockers Saint Agnes and the noise pop of Sun Scream.

Karen has been living in Brighton since 2010, where she rediscovered a love of music. And bars. And clubbing. She currently works three jobs to pay for these pastimes. When not writing or working or falling over, she can usually be found stuck in a book.
← PREVIOUS POST
Art Exhibition, 'Into The Outside: The Next Chapter'
NEXT POST →
The Fall, Sun 29th January
Mailing List
Recent Posts
Website developed in Brighton by Infobo
Copyright © Brighton Source 2009-2020
Death Valley Girls, Thurs 2nd Feb - Brighton Source