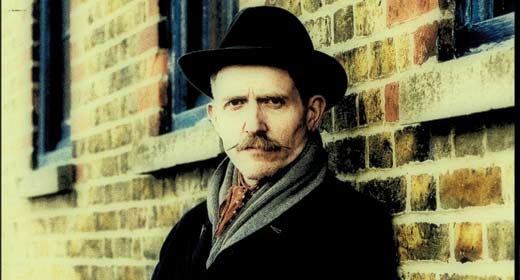 WILLIAM D DRAKE The Brunswick Sun 9th
Eagle-eyed SOURCE readers may have come to realise we’re a bit into the Cardiacs. It’s a love affair that goes back a long way, and in the hiatus caused by the unfortunate ill health of singer Tim Smith, we grasp as any Cardiacs-related straw we can. William D Drake, the band’s former keyboardist, is an odd fellow to say the least, and this will be an odd evening of piano, harmonium and voices, with assorted Cardiacs members lending contributions to both Drake’s set and the support act, Crayola Lectern. (NC)

JOHANNA HARMAN Latest Musicbar Sat 1st
Battling to shake off unhelpful comparisons with the likes of Joplin and Winehouse, Johanna Harman nonetheless continues to enhance her fast growing reputation as a blues fuelled chanteuse of rare distinction. On Saturday 1st the London-born, Devon-raised singer performs at the Musicbar with a top class band, containing current members of Massive Attack. A late night DJ set from Fabric’s Simon Harris rounds off the evening. (ME)

EASY STAR ALL STARS Concorde 2 Weds 5th
Their sublime 2003 album Dub Side Of The Moon took this studio-based project to a live band format and they haven’t really looked back since. Skanking their way around the world and delivering their beautiful vocal harmonies and superb rhythm section to the masses, they quickly established themselves as one of the top reggae acts around. Since then reimagining OK ComputerSgt Pepper completes the seminal tribute trilogy giving them even more to their afro-beat arsenal. (AS)

FARM YARD FESTIVAL The Western Front Sun 9th
The Cranbourne Street boozer right by Churchill Square has put together a noon-til-midnight outdoor line-up of bands playing for the Teenage Cancer Trust and the Martlets Hospice. On the bill are King Porter Stomp, Mean Poppa Lean, Rob The Rich, The Perils, Jumping Ships, Django Spears, The Wasp Factory, The Morning Orchestra, plus summer fun in the shape of fete games, street performers, face-painters, and head and shoulder masseurs. It’s free to get in but be prepared to have collection buckets rattled under your nose. (NC) and now a dubbed up

BESBILLY CHILDISH & THE MBES Engine Room Sat 15th With so many different incarnations it’s hard to tell which Billy Childish you’ll get, but our deer stalker-wearing maverick has along with his band The Musicians of the British Empire become a rather annoyed and acid tongued punk of late. Sounding like a pissed off Sham 69, expect to hear his anecdotal ditties on Joe Strummer, The Who and a lively sing-along about a rather distressing festive occasion in 1979. Don’t get those military jackets back out the closet just yet. (DT)

BILL CALLAHAN Concorde 2 Tues 18th “I used to be darker, then I got lighter, then I got dark again…” So explains Bill Callahan, once Smog and always the bringer of doom, in the opening seconds of his magnificent new album, Sometimes I Wish We Were An Eagle. He is a poet of Americana touched by death and beauty but also, apparently, by Joanna Newsome, the delectable US harpist. With their relationship now at an end and his mood on the turn, this seems the perfect opportunity to lift his spirits. After all, it can’t just be Bill and SOURCE who sometimes wish we were an eagle? (BG)

DINOSAUR JR Concorde 2 Fri 21st Looking more and more like a permanent fixture, the seminal Dinosaur line-up of Mascis, Lou and Murph return in support of their latest album Farm. It’s epic, and basically rocks like one mean bastard. Expect earth shattering riffs, solos and some extreme volume to go with it. Indie Rock doesn’t get much better than this, but bring the ear plugs as they don’t call this ‘ear bleeding country’ for nothing. (IC)

BEN – A TRIBUTE TO MICHAEL JACKSON Komedia Sat 22nd SOURCE was at the Glastonbury Festival when the stunning news of Michael Jackson’s death broke. Call it cynicism’s mask crumbling or a massive serotonin imbalance but the following days were emotional indeed. Forget the desperate history and remember the music – which is sure to be celebrated here tonight – and consider this scribe’s ten greatest Jacko moments (in order). 1) Wanna Be Startin’ Something 2) Thriller 3) Billie Jean 4) Human Nature 5) Beat It 6) ” Want You Back 7) Don’t Stop Til You Get Enough 8) Bad 9) Earth Song 10) Can You Feel It. Farewell, smooth criminal. (BG)

AT THE EDGE OF THE SEA Concorde 2 Sat 22nd
A one-day festival curated by Wedding Present mainstay David Gedge, including old papier-mâché head himself Frank Sidebottom, and the reformed it’s-not-really-them-though-is-it Weddoes (as they were once popularly known, many years ago). Brighton representatives include Astrid Williamson and the ubiquitous Pipettes, who, according to recent witnesses, are back on form and wearing “better dresses than ever.” C’mon Dave, persuade The Popguns to reform again and it’d be Festival Of The Month. Please? (SH)

BLACK LIPS Concorde 2 Weds 26th
Some people have struggled to take Black Lips seriously, as they bore through the centre of rock’s core like a four-man international invasion without a map. No longer. Exploding out of Atlanta almost a decade ago, the band quickly became renowned for their wild stage antics; taking in vomiting, urinating and the odd execution. But nothing could prepare the doubters for a show at Heaven in London last year, when a rudimentary riot concluded with guitarist Cole Alexander unveiling his pork plectrum. Clearly, these guys mean business. Stand well back. He may not have washed. Or pissed. (BG)

SISTER SLEDGE Concorde 2 Thurs 27th
Arriving on the international music scene just as the pimple of disco was ripe for squeezing, Sister Sledge did some pretty substantial business back in the day, most famously under the production wing of the Chic boys. You’ll know a handful of songs, the ones that get trotted out at weddings and nan parties; We Are Family, Lost In Music, He’s The Greatest Dancer and the supremely annoying Frankie from a brief mid-80s Sledge renaissance. Quite how they’re going to fill the rest of the set will be interesting – they did release a load of other stuff but no one bought any of it – so for the twenty quid they’re charging to get in, it wants to be a damn good rendition of We Are Family we hear tonight. (NC)

Sometimes an article is a bit of a team effort, and those are tagged SOURCE Writers. If you’d like to be part of that team, hit the Contact link at the top and get your work on this website.
← PREVIOUS POST
The Half Sisters Interview
NEXT POST →
Culture: August 2009
Mailing List
Recent Posts
Website developed in Brighton by Infobo
Copyright © Brighton Source 2009-2021
Gig Previews: August 2009 - Brighton Source