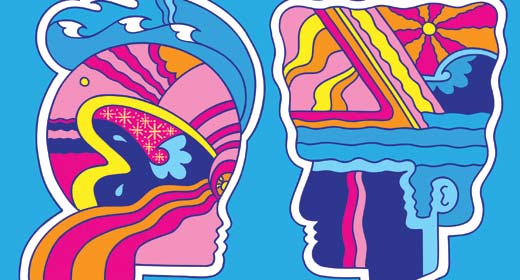 COMEDY: HOLLAND, HUME AND SOMEONE ELSE Caroline Of Brunswick Mon 3rd
Local chaps who’ve built a steady reputation for eccentricity during dozens of gigs across Sussex, Lee Hume and Jim Holland will be having a last test run before they head north for a second year at Edinburgh after selling out their Fringe slot down here. Hume will be attempting to explain his plans to save the Scots with an army of superheroes, in between interjections from Daniel Kitson devotee Holland and the appearance of a mystery special guest. (BM)

THEATRE: AS YOU LIKE IT The Little Theatre Tues 4th – Sat 8th
All the world’s a stage, or at least it is until you’re forcibly told to stop goofing around and start writing endless synopses of Shakespeare in pursuit of GCSE grades which won’t bring shame on your family. The Little are likely good enough to avenge those sorry adolescent memories with a transportation of the bard’s romcom to the 1920s in a literal dry run for the production ahead of an open air stint at Lewes Castle later this month. (BM)

PERFORMANCE: THE ROHAN THEATRE BAND Hector’s Thurs 6th
Rohan Kriwaczek is an outrageously talented classical composer who has dedicated his life to the funerary violin, a possibly fictional 19th century instrument whose Guild he is chair of and on which he published a book, An Incomplete History Of The Art Of The Funerary Violin, three years ago. His macabre public performances, madness flickering in his pupils as he goes, have always been rare enough but this is the final ever performance from the gloriously shabby Brighton-based genius. (BM)

FILM: MESRINE – KILLER INSTINCT Duke Of York’s Fri 7th – Thurs 13th
While the Summer Of Love was in full swing, intellectual supervillain Jacques Mesrine was zipping around the world co-ordinating mob bloodbaths, audacious robberies and media-savvy heists under endless cigar-chomping disguises. He met his own match under a hail of police bullets in 1979, but to this day no French yoof is complete without a Mesrine t-shirt, and this stylish hurtle through the life of the ultra-fashionable gangster de jour was nominated for nine of France’s equivalent of the Oscars. (BM)

ART: CHAMELEON Lighthouse Mon 10th – Fri 14th
During Tina Gonsalves’s first residency at Lighthouse in March, she invited unsuspecting viewers to have their faces read on Chameleon, a natty piece of kit merging neuroscience and art to read audience emotions from their facial expressions and respond accordingly. This time she’s encouraging the public to get involved again, working with French group Experientiae Electricae, whose raft of 3D screens will turn her work into interactive video sculptures. Gonsalves will also be discussing her methods at the venue on the 1st and 15th. (BM)

FILM: THE YES MEN FIX THE WORLD Duke of York’s Tues 11th
Until you’ve cost someone a billion dollars in shares by pretending to be a spokesman for them in an interview on a news bulletin with 300 million viewers, you’ll always feel like you’re missing out on the bleeding heart fun. The Yes Men are a couple of guys who pose as big players for morally-corrupt conglomerates, and this documentary of the spoofs and juvenile pranks they pull under their pristine personas is a staggering testament to the art of blagging. (BM)

ART: PINKYVISION SHOW Artist Residence Hotel from Sat 15th
To celebrate the opening of the Pinkyvision Penthouse suite at the hotel, as customised by the man himself, Pinky is bringing his print, papercut and poster to show to their gallery space this month. Following his paintings at Pussy and the old Record Library, Pinky’s been busy with solo shows in London, Bristol, Hull and Manchester – this is his first Brighton outing since last summer’s Love Is The Drug show at Ink_d and features art on offer including a new collection of Pinkyvision Pop-Posters at decent prices. (NC)

ART: ZACHARY WALSH Ink_d Gallery until Sun 23rd
One of Manchester’s most promising up and coming artists, Zachary Walsh creates figurative paintings of individuals with a sense of presence which is almost pop-art in immediacy and richness, set against abstract, subtle backgrounds. Most recently seen putting ridiculously beautiful twists on opera storylines in images which formed the promo material for Opera Holland Park, he’s taking on the equally heady theme of Greek mythology in this show of Gods, nymphs and monsters. (BM)

COMEDY: JERRY SADOWITZ Komedia Sun 23rd – Thurs 27th
The thought of Jerry Sadowitz “testing out” his new Edinburgh show, the succinctly-titled Comedian, Magician, Psychopath, seems a bit silly really. The torrent of rabid bile he unleashes on stage, taking in misogyny, xenophobia and lashings of general hatred along the way, is about as likely to be replaced by good-natured joshing as it is by the reincarnation of Bernard Manning, so this is simply a chance for the world’s most psychotic (and brilliant) magician to indulge in five nights of the usual vicious rage. (BM)

FESTIVAL: BRIGHTON MODERNIST & 60S WEEKENDER Various venues, Frid 28th – Sun 30th
I’m One, an enormous new photo catalogue of the Mod scene, launches in the spiritual home of the Vespa troops with 15-foot prints from the book on the walls opposite the Volks, where they’ll be putting on daytime DJs throughout the Bank Holiday. It’s accompanied by two club nights at the Komedia – a 60s dance party on Saturday and a northern soul all-nighter on Sunday – as well as live bands, ashen-faced scooter races and a bumper weekend for Jump The Gun. (BM)