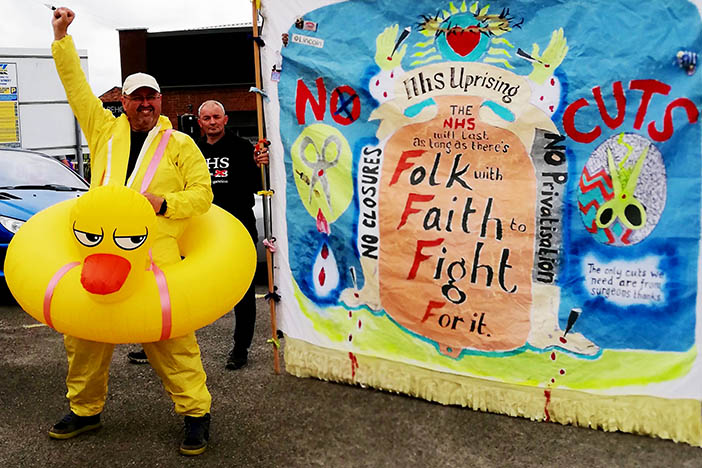 As the NHS’s most loathed former health secretary pitches to become Prime Minister, fashioning comedy from the squeeze on public health services is no easy task. Multi-talented performer Steven Carne’s tried and succeeded, though, playing dozens of shows and even winning awards. The actor, singer and director leads 999 Call for the NHS, a campaign group against privatisation, and won first prize, alongside NHS campaigners, for a feature on grassroots activists within the service at the Sage Award short film competition.

Now he’s back with his medical mash-up, channelling Frank Sinatra, Lily Allen and Englebert Humperdink. “Right now, it’s interesting times,” says Carne, who has largely performed the show up north over the last 18 months. “My job is to help people understand what’s going on.” The issues are wearily familiar, so a witty exploration of overcrowded corridors and stretched surgeries seems a much-needed respite from dispiriting newspaper headlines. “I try to explain quite difficult concepts around how funding works, which can be very boring,” he says, outlining the art of turning a painful subject on its head.

Sussex Defend the NHS are involved in the show – Carne expects a short talk in each half from members of the group – but the emphasis is firmly on entertainment. Jokes, songs and theatre are all overseen by a symbolic duck, included at the suggestion of one campaigner and, sometimes, worn by Carne. “The main thing the NHS are denying is that we’re moving towards an Americanisation of healthcare,” he reflects on the US President’s recent visit. “We’re involved in the Campaign for the NHS Reinstatement Bill, which basically says the NHS should be renationalised. That is the only cure for it. There is no other way around it – but Labour are sitting on it. We want to create a colourful revolution.”

There will be two smaller shows at the Poets’ Ale and Smoke House, 33 Montgomery Street, Hove on Saturday 22nd June. 7pm and 8.30pm. Audience members requiring wheelchair access should attend the show on Friday.

Ben Miller is a SOURCE feature writer and reporter.
← PREVIOUS POST
The Death of Ivan Ilyich Review
NEXT POST →
What Doesn't Kill You Review