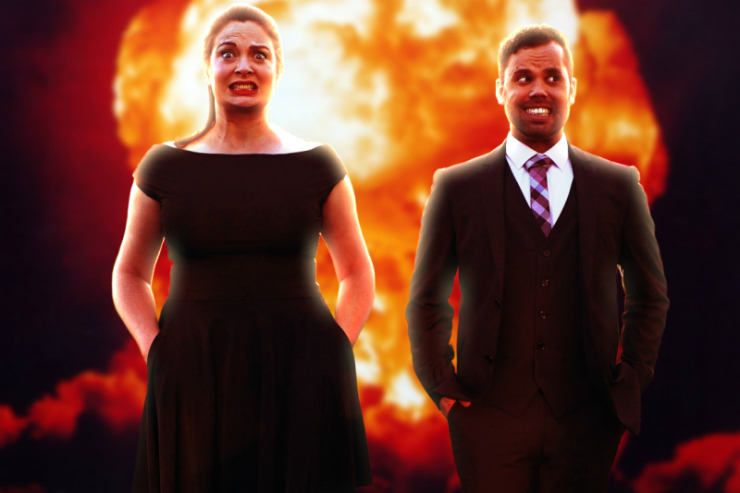 What Doesn’t Kill You Review

One of the first characters we meet in ‘What Doesn’t Kill You’, a visiting comedy from Perth, Australia, is a New Yorker agitated by an exploding toilet. She tries everything to stem the flow, from running for help to sitting on the throne in desperate hope of divine intervention to save her from the shitstorm.

Combustible cisterns end up being the least of the worries in this sweet, witty set of stylish, often slapstick shorts, though the toilet gags ease everyone in via belly laughs at the start. They also introduce theatre company Holland St’s lyrical capacity: even at The Warren, it’s a fair bet you won’t find another fringe show skilfully rhyming anus and heinous, while bowels “blast like the Czech Philharmonic” and actors and singers Erin Hutchinson and Tyler Jacob Jones show considerable vocal and theatrical range and sophistication. The original score, which has been written by Roger Woods, the composer of the company, is slickly performed by Joshua Haines on piano, smoothly soundtracking tales in which Lady Luck is less absent, more standing on the sidelines repeatedly firing poisoned darts at the protagonists.

The company found these true stories of the outrageously afflicted via the pure gold of Google searches, meaning that Ann Hodges – the only person to have survived being struck by a meteorite, in 1954 – becomes a muse to these misfortune tellers. There’s no makes-you-stronger happy ending to Hodges’ stratospheric tale in bygone suburban Alabama history, though. Jones might imagine the hapless heroine making honey from hay, but Hutchinson bears the dismal reality of her ensuing nervous breakdown and, later, death from kidney failure.

Despite the frequently grim epilogues, this is a charming cabaret that flies past at the speed of a descending rock with an unsuspecting victim’s name on it. A crucial component in the effectiveness of its storytelling is its breezy zip, combined with tight scripting. Holland St’s love of fringe – and, you sense, lessons learned from observing flabbier productions of this kind – ensures the show clips briskly along, investing just enough into each study to pack a crisp punch before moving on. If the mere mention of audience participation tends to make viewers recoil in settings as close as this, Hutchinson and Jones have enough swagger and stardust to make their brief on-stage summoning of an impromptu accomplice work (tonight, it helps that their invited extra lacks any trace of stiffness, demonstrating admirable poise under the spotlights.)

These are, as they put it, “survival snapshots” – inexplicable twists, Holland St suggest, worthy of that corny old Alanis Morrissette song. “I have always had a strange fascination with maritime disasters,” purrs Hutchinson, introducing the story of Violet Jessop, an Irish-Argentine stewardess who survived the sinkings of the Titanic and its sister ship. Fate can be cruel, and it can also be defied.