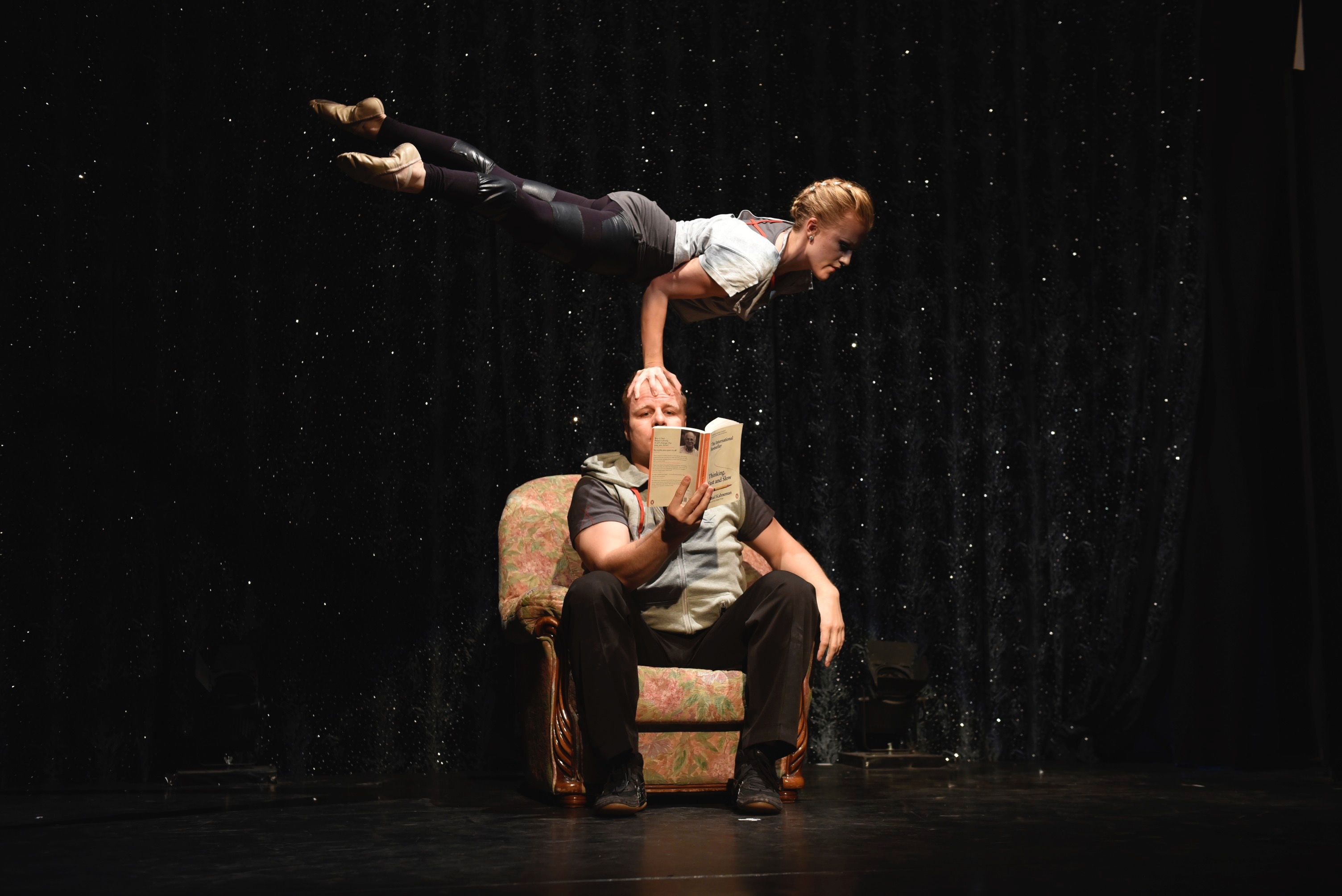 As with much of Brighton Fringe’s intriguing Finnish season, a sense of mystery accompanies ‘Suhde’ and ‘Sound Barrier’. We know from their own descriptions that Katerina Repponen and Pasi Nousiainen are circus artists weighing 50kg and 100kg respectively, specialising in hand-to-hand acrobatics and foot juggling. Yet there’s little to suggest the way they can contort and balance their bodies in the opening moments of ‘Suhde’.

Essentially a comedic, poetic study of the complex dynamics of relationships, ‘Suhde’ begins with Nousiainen reading a book while Repponen crouches and prances around the edge of the armchair he sits in. Swiftly, this domestic picture develops into a playfully antagonistic battle, with the couple contesting control of the chair. Both performers hit the deck in turn, and the cat-and-mouse daftness of the chase almost makes you forget the feats of balance making it happen.

Here, a confined section of space has limitless possibilities: Nousiainen ends up plunged behind a cushion, cackling a muffled laugh. Having pivoted an arm on Nousiainen’s head, Repponen later falls half-asleep in the chair during a sequence involving a roaring Nousiainen hurling two huge kettlebells around like tennis balls.

There’s a hint of what’s to come in ‘Sound Barrier’, which will debut for one night only at The Old Market, when Repponen – who usually just about has the upper hand – cracks a snaking whip on the stage, breaking the whispers and laughter from an absorbed crowd of families.

She feels the whip has been given a bad rep in the past, and as a prop it still looks and sounds fearsome here. But Repponen’s whip is also colourful and capable of elegant precision, underlined by her bullseye ability to use it to separate the flowers from a set of roses held by a suitably timid Nousianen. In ‘Sound Barrier’, she’ll relate its power and beauty to the human body and mind, with Nousianen in the role of director.

Like ‘Väkevä/Lyydia’, the spectacular demonstration of strength and agility that claimed the space (and attention) in St Mark’s at the start of the festival, Nousiainen and Repponen are creating strange, sensuous, funny and challenging circus, underpinned by well-paced storytelling.

Aside from boggling at their immense physicality, what stands out is the pleasure taken by performers who might not have had the chance to tour to the UK without an organised season of this kind. More strands like this can only enhance the unpredictable charm of the fringe.