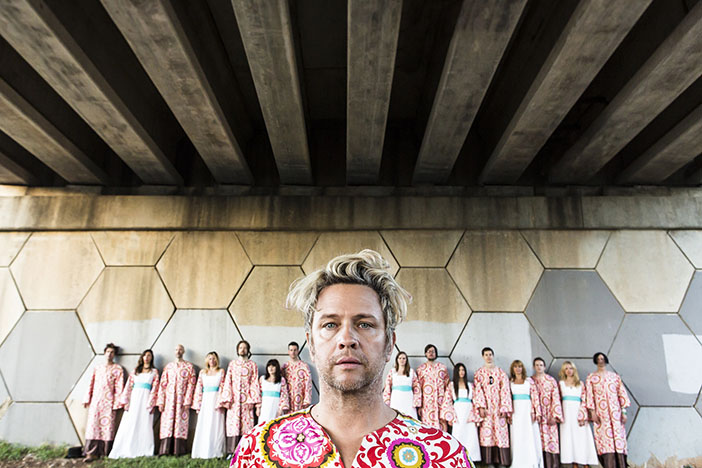 “Choral symphonic rock pop” is how Polyphonic Spree describe themselves on their website. We reckon “psychedelic gospel” would be a more faithful (not to mention succinct) summary. Occupying the sacred middle ground between The Flaming Lips and the Hare Krishnas, Tim DeLaughter’s cultish entourage of multi-instrumental happy-clappers must be the most ambitious and unusual “band” of the past 20 years.

Their debut LP ‘The Beginning Stages Of…’ was one of those records people either loved with a passion or didn’t get at all. To the receptive, it was an emotionally intense head-rush, with choruses that flooded your system with brain-exploding intensity; evidence that joyous music doesn’t have to be drippy or saccharine.

Subsequent albums never reached comparable highs (it would have been a miracle if they had), but their forthcoming gig at the Concorde 2 on Friday 4th September will see The Spree showcasing their debut in full.

Considering how many of them there are, they can’t possibly make any money from touring — buying a ticket almost feels like donating to charity. And if they can get anywhere near re-creating the atmosphere of ‘The Beginning Stages Of…’, this promises to be a transcendent experience.

For window cleaning in Brighton and Hove, visit the Brighton Window Ninja at brightonwindow.ninja

A magazine journalist and former BBC minion, Gaz's words can be found in publications ranging from The Radio Times Guide To Films to 1001 Songs You Must Hear Before You Die, as well as on his blog The Wine Ninjas . He plays drums in a psych band, and once fell into a frozen lake in Transylvania.
← PREVIOUS POST
Friend Within, Fri 4th September
NEXT POST →
Pride Review 2015
Mailing List
Recent Posts
Website developed in Brighton by Infobo
Copyright © Brighton Source 2009-2020
Polyphonic Spree Live at Brighton's Concorde 2