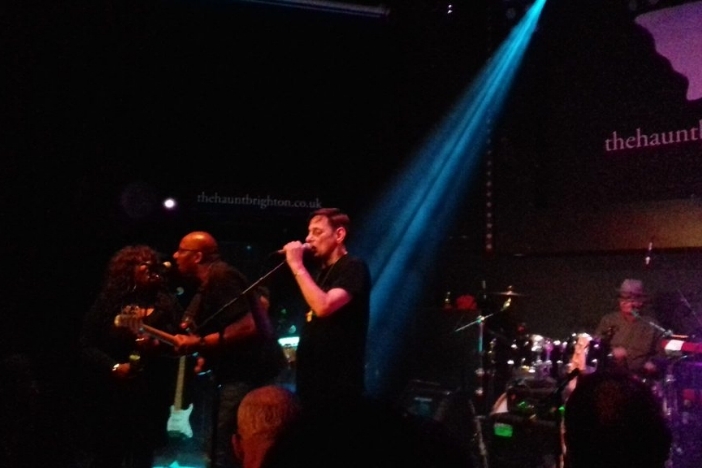 Returning to Brighton for the first time since 2010, A Certain Ratio’s long-awaited show deservedly filled The Haunt with a crowd who weren’t ready for the weekend to stop. The band who put the funk into Manchester post-punk, they arguably played as important a role in Anglo-American dancefloor relations as Factory Records label-mates New Order. ACR absorbed Latin and jazz influences from New York, performed alongside Talking Heads and Madonna and recorded with Grace Jones, building a dedicated cult following while friends and former members hit the mainstream.

As ACR celebrate their 40th anniversary, it’s a veteran crowd of dance heads in tonight. We’re packed in down the front but the room soon starts to move and loosen up as the group open with instrumental statement of intent ‘Sounds Like Something Dirty’, Anthony Quigley blowing his distinctive tenor sax over the deep flex of the rhythm section. ACR’s line-up has been in place since their brief Madchester era major label dalliance, with Quigley, Primal Scream singer Denise Johnson and engineer turned keyboard player Liam Mullen joining longstanding members Jez Kerr, Donald ‘DoJo’ Johnson and Martin Moscrop.

As they smack straight into the funk slap of ‘Do The Du’, it’s evident that there’s been no slackening of ACR’s rhythmic tension over the years, the DoJo-Kerr team heavy as a hammer but sharp as a knife. When not delivering the song’s grisly vocals, Kerr elects to be seated, concentrating on his bass, while drummer DoJo projects, as ever, a masterclass in cool concentration.

‘Wild Party’ sees Denise Johnson briefly on stage to back Kerr’s vocals before ACR dive into the otherworldly grooves of their earliest material, a deep swim through the swirling undercurrents of ‘Flight’, ‘And Then Again’ and ‘Forced Laugh’ with Moscrop’s guitar pouring forth waves of sickly wah-wah. And then a sudden surfacing into the ecstasy embrace of immaculate anthem ‘Won’t Stop Loving You’. Johnson re-joins the group, sticking around this time to bring her own energy to the stage, dancing, grinning and taking selfies in between her vocal turns. One day her stints with ACR, Primal Scream, Electronic and more will be recognised as the irrepressible glue that binds a wide swathe of UK dance and indie together.

After the humid sweatbox of ‘Rialto’, the rest of the set leans heavily on ACR’s acid and techno period, one that kicked in as UK club culture really took off, including the euphoric ‘Good Together’ and ‘Be What You Wannabe’ and the more soulful ’27 Forever’ and ‘Wonder Y’. These early 90s tunes are as late as ACR go tonight, reflecting the sparsity of their output over the ensuing decades, although last year’s thorough reworks of Barry Adamson’s ‘I Got Clothes’ and No Zu’s ‘Body2body’ hold out hope for fresh music to come.

Even so, after eight years away from town, no-one’s begrudging a lack of new tracks when presented with classics like the set-closing cover of Banbarra’s ‘Shack Up’. The encore finds Donald Johnson swapping drums for the intricate bass guitar and shared vocals of ‘Knife Slits Water’. The final all-out Latin hoedown of ‘Si Firmir O Grido’ is a mass of cowbell, whistles, drums and percussion, members swapping roles multiple times mid-song without ever dropping the groove. “We won’t leave it so long next time,” promises Kerr. Damn right.

Words and Photo by Stuart Huggett

Stuart Huggett grew up in Hastings, writing fanzines and blogs about the town’s underground music scene. He has been a regular contributor to SOURCE, NME, The Quietus and Bowlegs. His huge archive of magazines, flyers and vinyl is either an invaluable research tool or a bloody pain. He occasionally runs tinpot record label Dizzy Tiger, DJs sporadically and plays live even less.
← PREVIOUS POST
A Clockwork Orange, Sat 5th May
NEXT POST →
Interview with Simon Raymonde of Lost Horizons and Bella Union
Mailing List
Recent Posts
Website developed in Brighton by Infobo
Copyright © Brighton Source 2009-2020
A Certain Ratio Review - Brighton Source