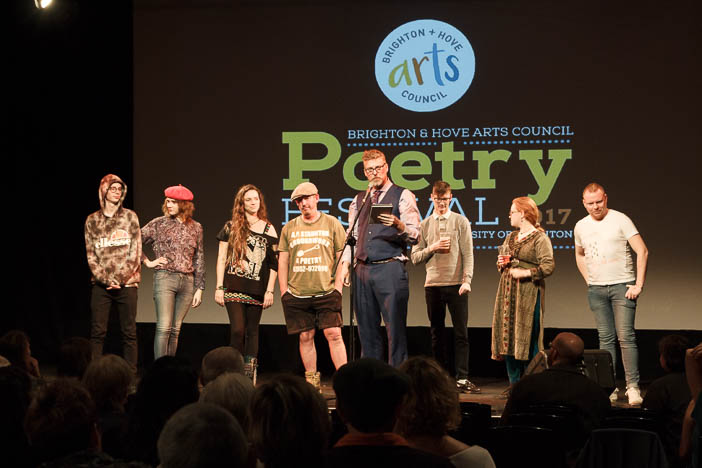 The night began with another of Hammer and Tongue’s prolific poetry slams. Poets aligned themselves on stage and boldly blurted out humorous tales of everyday anxieties and anguish. Poetry slam devotee AP Staunton was crowned as king, although a special mention should go to Daniel Searle, whose cutthroat wordplay made many of us tear-up with laughter.

Overall judge of the BHAC open poetry competition was Dr Jess Moriarty, Course Leader of English Literature and Creative Writing at the University of Brighton. “You’re all winners tonight,” she announced while describing all those who contributed as “genuine activists and artists whose submissions both provoked and inspired.”

From haikus to sonnets, the competition received over 600 submissions and was the third poetry festival the Brighton Arts Council has so far organised. Entries served as a tender reminder of the familiar pains and joys experienced through life. Words of anger, frustration, joy and sorrow spilled from the mouths of the contenders. The festival’s 1st place position and grand prize of £1000 was awarded to Liz Fincham for her shrewdly penned ’Brexit Blue’ – a brooding reflection on last year’s referendum result. 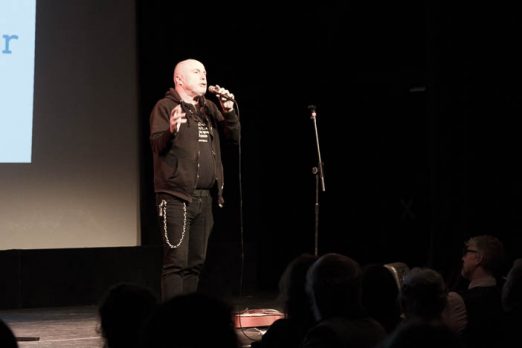 Attila The Stockbroker was next to take centre stage, and humbled us with rugged charm and poetry that was ferociously bittersweet. Telling tales of his love affair with the NHS, his uncertainties faced from a diagnosis of cancer and a melodic ode to Jeremy Corbyn entitled ‘The Man With The Beard’ – it was a performance that would have been hard for many to outshine.

Carol Ann Duffy, however, undeniably stole the limelight. Accompanied by musician and all-round prankster John Sampson, she spoke of politics, poverty, education and war, her prose offering dips and dives from dark and dreary landscapes to hope and optimism towards the future. 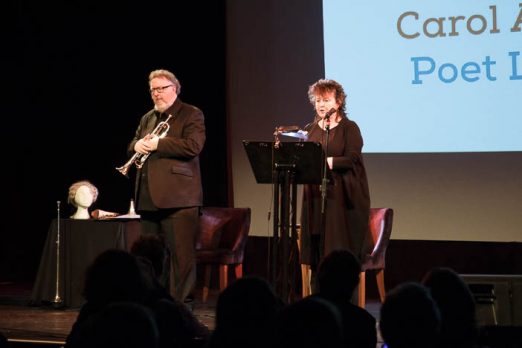 We were treated to renditions of both ‘Last Post’ and ‘No Man’s Land’ before being introduced to the deliciously satirical collection of ‘The World’s Wife’. This told the melancholy tale of the wife of Faust, and Carol Ann Duffy professed to considering renaming the character as Mrs Trump due to recent events that had unfolded in the news.

Long gone are the memories of being sat in a drab and downcast sports hall, despising our GCSE poetry anthology and waiting for the clock to strike half three. Watching a time-honoured heroine of poetry take to the stage and raise a middle finger at Trump was unquestionably a tick off the bucket list.