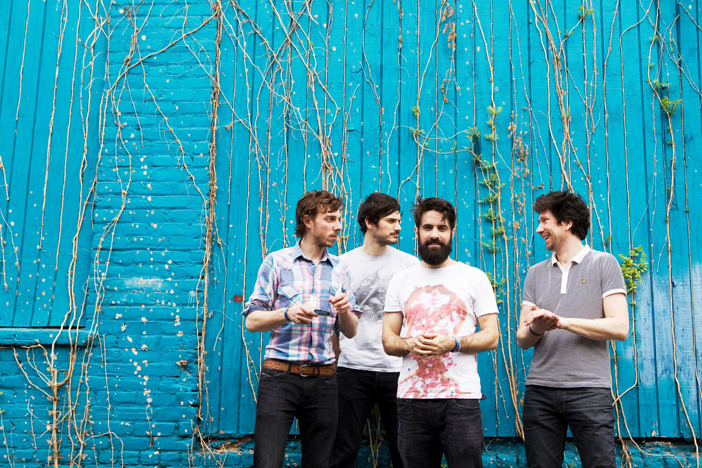 Sometimes, post-noughties, it feels like we’re living through a shimmering new dawn of pop. Tonight’s ostensibly alternative bill, which sees Clock Opera’s intricate musical anthems supported by Nzca/Lines’ analogue pulse and Bright Light Bright Light’s soaring melodies, is one that has far more in common with the polished top end of the charts than occasional interlopers like Mumford And Sons or Jake Bugg do. It just needs a leap of faith from bands and buyers to put them there.

We first saw him ages ago, opening for We Have Band and Mirrors at Audio, and two years later, almost to the day, he’s still third on the bill. If he resembles anyone, it’s that other Wales-born, London-based chart entryist Green Gartside. We suspect he’s just too damn nice to be fussed about his fame, but really, daytime radio’s missing an angel.

With their white shirts and keyboard sheets illuminated by glowing mic lights, and a dizzying selection of back projections, Nzca/Lines have grasped the concept of the spectacle more than anyone else on tonight’s bill. Michael Lovett’s trio keep their heads down, however, concentrating on the shifting pulses of their multiple synths.

The delicate spaciousness of Nzca/Lines’ eponymous album (rarely off the SOURCE office stereo, incidentally) is a little buried by the volume tonight, it’s airy, Hot Chip-styled songs beginning to blur. Finally, though, ‘Atoms & Axes’ rises above the murk in style.

Clock Opera are the project of another electronic auteur, singer and producer, Guy Connelly, and they come on stage to a symphony of sampled clock ticks, tocks and bells. Hammering away at his keyboards with a full band, Connelly and Clock Opera are the most dynamic performers of the night, but even so they don’t exactly rock. Powerful songs like ‘White Noise’ and ‘11th Hour’ build to thundering, emotional climaxes, but there’s a world of techno complexity buried within.

At points it all feels too much, and even Connelly appears to be straining during the vocally challenging ‘Once And For All’ (the one with the devastating video with dear old Dudley Sutton). When the matrices of piano on ‘Belongings’ and ‘Move To The Mountains’ are given space to breathe, however, it all comes together. An encore of ‘Fail Better’ completes this run through the ‘Ways To Forget’ debut, and then they’re done, thanking us again for heading out on this windswept Monday night.

Top of the pops. If only the world was tuning in.