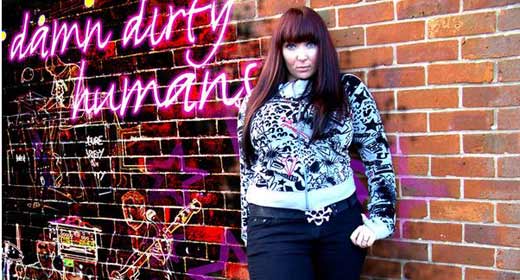 DEMO: DAMN DIRTY HUMANS Superstar (www.myspace.com/damndirtyhumans)
Republica were alright, weren’t they? Ready To Go and all that? Well the Damn Dirty Humans aren’t a million miles from there, the kind of up-tempo disco pogo punk that The Gossip have done alright with recently, albeit just for the one song. We got two here, Superstar being the standout but The Dance Hall not letting the side down by any means. Check the MySpace for live dates, probably well worth seeing. (NC)

DEMO: KIDS LOVE LIES (www.myspace.com/kidslovelies)
Formed in November last year, the Kids have been busy building a London live base and seemingly avoiding the potential potholes of sound too much like the Ting Tings, Yeah Yeah Yeahs and any number of other repetition-named, female vocal bands. For some reason it always seems irresistible to try and make these kind of comparisons to make sense of, gasp, a woman singing in a band, so who are we to buck the trend? They say the Banshees, but this is more in tune with Lush’s pop blueprint if anything. And yes, it’s pretty good. (NC)

SINGLE: LE BAND EXTRAORDINAIRE EP (www.myspace.com/lebandextraordinaire)
Taking the essence of Tom Waits’ bleary-eyed bar room blues and mixing in a measure of indie-tight arrangement together with liberal dashes of jazz and theatrical vocals, Le Band Extraordinaire are ploughing a likeable and genuinely unique furrow on their debut ep. The accomplished songwriting and arrangements even allow them to sneak in the odd nod to King Crimson and Gong without too much eyebrow raising or sniggering. A busy 2007 saw them cementing a dedicated local audience, on the evidence of this ep they’re well worth a look. (NC)

SINGLE: LEFT HAND RED Transition (www.myspace.com/lefthandred)
There’s nothing particularly original about Left Hand Red, but that’s not necessarily anything to moan about. When you’re playing ballsy, traditional four-piece pub rock in the grand old style of Dr Feelgood, what’s important is a tight delivery and a big dumb catchy beat you can watch your the head on your pint slopping about to. It’s a sound that’s well rounded, like a wheel if you will, and as such requires no reinvention – it just keeps on rolling, er, like a wheel. (NC)

Sometimes an article is a bit of a team effort, and those are tagged SOURCE Writers. If you’d like to be part of that team, hit the Contact link at the top and get your work on this website.
← PREVIOUS POST
Interview: Dynamite Sal
NEXT POST →
Music Reviews: June 2008
Mailing List
Recent Posts
Website developed in Brighton by Infobo
Copyright © Brighton Source 2009-2021
Critic: Demo Reviews June 2008 - Brighton Source