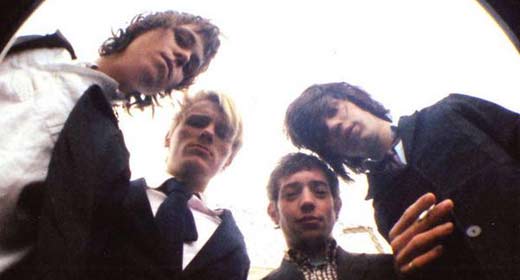 ALBUM: CLOCKWORKS Swings & Roundabouts (myspace.com/clockworksonline) This isn’t a band we’ve come across before, but it’s instantly obvious from the look and sound of the album that they’re come a long way since forming in July of last year. Powerful songs with proper hooks, played well and properly produced, the only thing that’s left for Clockworks to clock up is that chance spark of luck that propels them onto the right tour or lands this album onto the lap of the right radio producer, and they’re away. The good will always out, so hopefully it’s only a matter of time. (NC)

SINGLE: END OF LEVEL BADDIE Fly On The Wall (myspace.com/endoflevelbaddie) While stalking through the Facebook photos of a recent date of ours, we noticed she was friends with some End Of Level Baddies. Ah, Brighton’s a lovely small place. Luckily her it’s-not-you-it’s-me doesn’t taint our ears for this single though. Fly On The Wall is two minutes of proper guitar pop, on the same side of the street as Maximo Park if we’re pushed for the topography of the band’s sound. It’s thoroughly decent. (NC)?

DEMO: THE SHOESTRUNG (myspace.com/theshoestrung)
This was one of those moments like out of the films, when a manager tells you he has a great new band, checks out the cut of your shirt and decides they’re gonna be right up your alley. How right he was. The Shoestrung have a Brian Jones-era Stones vibe about them; an authentic old school r’n’b sensibility shot right through their taut, raw like sushi rhythms. the button-down sound of the underground, But this is no revival trip, their essence of vintage authenticity vies with a definite contemporary sound to arrive squarely at the sound of now. (NC)