Onto day two and half our team are over in Hove for a run of special shows at All Saints Church, topped by brass-toting local vets British Sea Power. Meanwhile, back in town, things are hotting up with Sauna Youth, Savages and Toy.

Sauna Youth, Green Door Store
Pulling a strong early crowd, the members of Sauna Youth score a déjà vu double at DRILL – their other band Monotony (same musicians, different instruments) supported Young Husbands at the same venue last night. A whirl of spinning bodies and spiralling arms, Sauna Youth rattle through shrill, two-minute pop blasts like ‘Transmitter’ with barely a pause, Jen Calleja and drummer Richard Phoenix divvying up the shouting between them. Whether by influence or osmosis, the DNA of curators Wire (in their original 1970s guise) winds right through these thrilling motorised tunes. In their effort to be everywhere all weekend, Wire’s Colin Newman and partner Malka Spiegel turn up just as they finish, but you can’t have everything. (SH)

Toy, Sticky Mike’s Frog Bar
Toy (pictured) strolled onto stage to a very warm welcome. The small basement venue is packed, people are squashed in while more wait outside hoping to get a glimpse of this great Brighton band. It’s one of the busiest shows of the weekend. Comprised of former members of Joe Lean & The Jing Jang Jong, Toy mix up psych rock and indie with nods to shoegaze and krautrock. Awash with blue light they deliver a solid set with the volume of a proper rock band and, with the bassist asking to be turned up early on, the deep tones the leave us buzzing. The only aspect lacking is the excellent visuals from their videos. (MT)

Savages, Concorde 2
One of the downsides of having so many bands playing at the same time is that sets as good as this aren’t as popular as they should be. The Concorde 2 is only half full, we’d expect more for a headline show. Savages (pictured) bring a strong and confident stage presence with a very tight sound that’s almost on the brink of being intimidating. Dressed in black and with slicked back hair, lead singer Jehnny Beth dominates the stage with her powerful and intense vocal display. Backed by the post punk sounds of her band and three lone spotlights amongst a dark stage, this is one of the most memorable and atmospheric sets of the weekend. (MT)

LoneLady, Concorde 2
Making a decent claim against fairly thin competition to be the funkiest band of the weekend, Warp’s LoneLady win over a big chunk of new fans supporting Savages tonight. Unassuming Mancunian Julie Campbell and her band follow the path of her early 80s forebears on Factory Records, joining the dots between scratchy Northern post-punk and taut New York disco. Deft current single ‘Groove It Out’ is thrown casually out, early on, in a set of irresistible dancefloor workouts. Quietly focused, Campbell’s also one of the smartest guitarists in town, her hypnotic, highly strung lines tugging the beat along seemingly without effort. (SH) 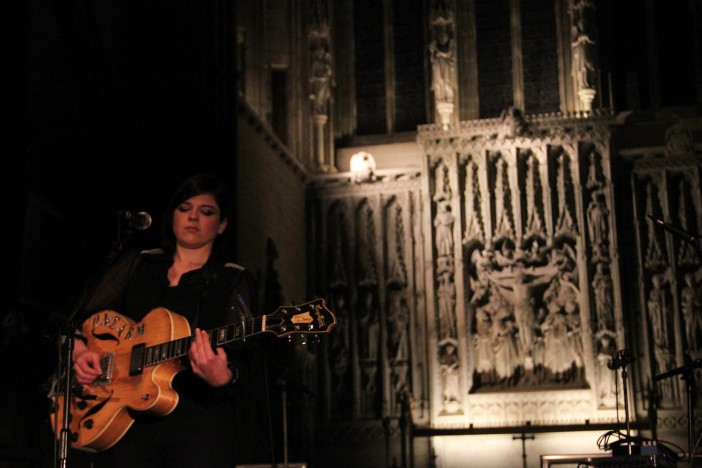 Gemma Ray, All Saints Church
Gemma Ray is a British chanteuse who is now one of the ex-pats living and making music in Berlin. It’s remarkable she is not better known as she’s been pretty prolific – releasing an album a year since her first in 2008, including this year’s excellent ‘Milk For Your Motors’. Apart from Wire, she is also the only artist we’ve spotted playing twice this weekend. We catch her set at the amazing All Saints Church which, whilst sparsely attended for this early support slot, suits her gothic pop perfectly. With her able drummer in tow, she runs through an array of impressive songs, focusing mainly on her last couple of albums, and her warm rich vocals fill the epic space. It’s a strong introduction to an artist we’re now determined to seek out for more. (JS) 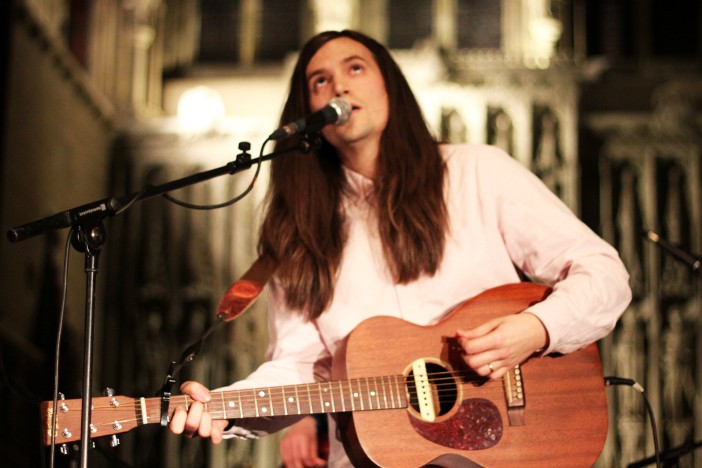 It Hugs Back, All Saints Church
It Hugs Back are a young band of friends centred on the lanky long-haired dude Matt Simms, who is perhaps best known as the mainstay second guitarist in the current line-up of Wire and hence one of the hosts of DRILL festival. It Hugs Back’s early record sounded like Stereolab (fittingly released on the Too Pure label) but their two subsequent albums have seen them take on a fuller atmospheric sound, embracing early 70s Americana as well as energetic rock-based electronica (first track on their excellent new album reminds us a lot of Brighton’s own AK/DK). It’s an ambitious, adventurous mix making for layers of entrancing sound which leaves the growing crowd who’ve begun to amass for British Sea Power quietly impressed. (JS) British Sea Power, All Saints Church
“We’re in the middle of bloody nowhere!” the BSP merch man moans after the band’s sumptuous and refined show at the magnificent All Saints in Hove. Playing with a five-piece brass ensemble from Bournemouth, BSP tip-toe through an alternate version of their back catalogue, festooned with fairy lights. Tracks that normally require a little more welly, such as closer ‘Carrion’, are tempered by skilful softer playing and hushed tones. “It’s actually quite scary in here,” offers frontman Yan, gazing up to the vaulted stone ceiling. But this was a trek worth making, and the sounds of his accomplished band kept the devil away. (JK)

The SOURCE team covered all four days of DRILL: check out our reviews of Thursday, Saturday and Sunday. There’s also more photos from the festival here.