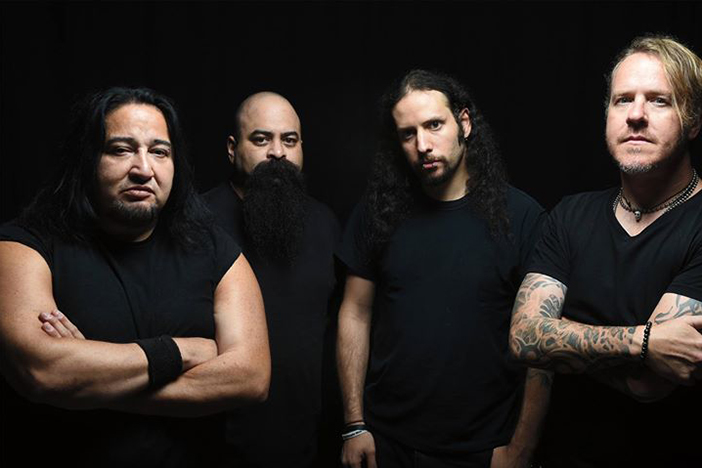 Fear Factory have been around the block a few times. Not that they’re Ozzy Osborne sort of age, but it was way back in 1995 that the career defining ‘Demanufacture’ was released unto the world. Stranger still is the fact that they actually formed in 1989, which means they’re rapidly approaching their 30th anniversary.

In the late 90s they held their own very comfortably with the Panteras and Sepulturas of the metal world, headlining venues like London’s Brixton Academy. That we’re now seeing them in the smaller confines of the Concorde2 could be seen either as evidence of the band’s waning appeal or a teenage wet dream.

The gig is billed as a “Bloodstock warm up show” (the Derbyshire festival is taking place over the same weekend, they play the main stage on Saturday), so one can’t help but wonder if they’ve made a rather typical American mistake and assumed that the UK is much smaller than it actually is. It’s a fair old drive from the south coast up to the mid-west, a bit of a rush to make in a few hours between gigs.

The band come on stage at about 8:30 to a thunderous applause and an already heaving crowd, showing that in Brighton at least they still have a tremendously supportive fanbase. They launch straight into the title track of the ’95 masterpiece and we can tell this isn’t a band who are simply going through the motions for the cash (or even driven by the lack of it). Instead, they genuinely seem to enjoy their art and bringing it to the people, which is always a great thing to see these days.

The set is peppered with classics, ‘What Will Become’, ‘Edgecrusher’ and of course ‘Replica’ all get epic airings, but it becomes apparent about halfway through that Fear Factory are still trying to sell their latest offering (2015’s ‘Genexus’) to the masses. “Who here has our new album?” asks guitarist Dino Cazares at one point, to which a hefty 20 or so people give a resounding cheer. This does mean that although the band are on strong, heavy, mean form, the set suffers a little from the absence of classic tracks like ‘Linchpin’ and ‘Descent’ which we would have thought were surefire crowdwinners.

The effects used by vocalist Burton C Bell are much more noticeable in a venue like this compared to a festival stage. During the growling roars and death metal screams, both delivered in their fullest tonight, it’s easy to see a frontman in his prime. However during the mellow, more soulful moments of the set his voice is aided by a myriad of effects; the reverb, phaser and flange make us wonder if he’s embracing the technology for the right reasons, or whether he’s got something to hide. This isn’t helped by the sound which is rather awful at times, particularly during the slowdown moment of ‘Resurrection’.

All in all though the night was a blast and many fans came away very happy to see a band who are still evolving after 27 years, still enjoying what they do and still doing it for themselves.

Sometimes an article is a bit of a team effort, and those are tagged SOURCE Writers. If you’d like to be part of that team, hit the Contact link at the top and get your work on this website.
← PREVIOUS POST
Boundary Festival, Sat 17th September
NEXT POST →
Pride In Pictures 2016
Mailing List
Recent Posts
Website developed in Brighton by Infobo
Copyright © Brighton Source 2009-2021
Fear Factory Review - Brighton Source