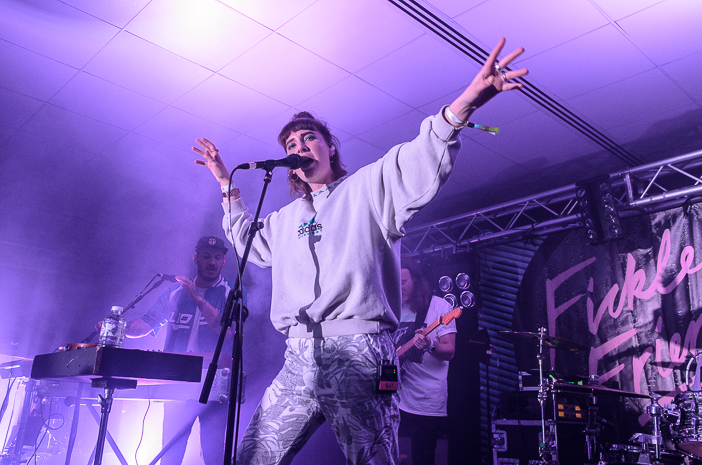 And we’re off. The first day of The Great Escape offered a diverse menu, from lush folk at a Regency ballroom to riotous punk on a Ghost Train on the pier. Both of those were pretty special, albeit in very different ways. We’ll be posting reviews of every day of the festival, but here’s what the SOURCE team caught on Thursday.

The Goon Sax, Komedia
Brisbane teens The Goon Sax begin their European trip with three shows in one day at The Great Escape, this evening’s busy Komedia slot in the middle, and they’re understandably discombobulated. “My phone’s going off to wake me up this morning,” apologises co-frontman Louis Forster as a ringtone disrupts the set, “Which didn’t happen.” The sun-dappled strums of ‘Up To Anything’ and ‘Sometimes Accidentally’ can’t help but recall Forster’s father’s group The Go-Betweens, the triangulation with drummer Riley Jones and fellow songwriter James Harrison suggesting some kind of indiepop morphic resonance is afoot. While they have talent and charm in abundance, The Goon Sax aren’t quite their own band just yet, but they’re still young. It’ll come. (SH) 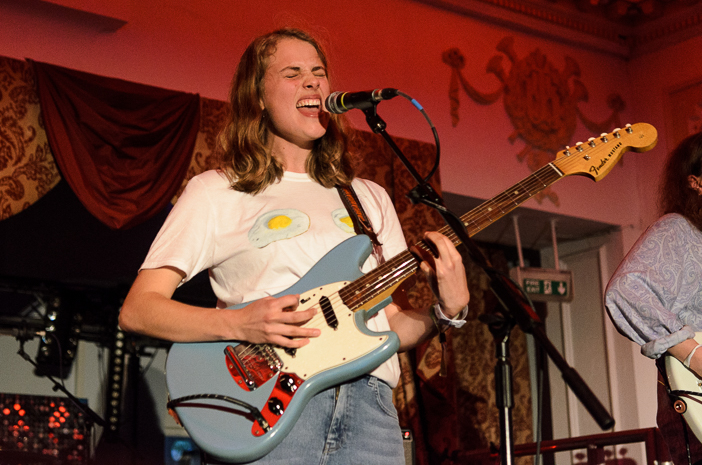 Marika Hackman, Paganini Ballroom
Marika Hackman (above) is one of the first acts to take to the stage at the Paganini Ballroom this evening, a venue tucked away on Ship Street, adorned with chandeliers and a carpeted floor. BBC 6 Music have taken over the ballroom for the festival, and DJ Tom Ravenscroft is compere for the evening.
On the cusp of releasing her second album next month, ‘I’m Not Your Man’, Hackman has taken a bold swerve away from her singer-songwriter roots that brought her such acclaim on the indie-folk scene. This time, she’s brought a backing band along for the ride, and delivers a fun set of twisty indie delights with Chastity Belt-esque guitars and a faultless voice used to good effect on new tracks like ‘Boyfriend’ and ‘My Lover Cindy’. (KS)

Klangstof, Coalition
We’re just stepping onto the promenade when The Great Escape app (a necessary piece of software this year after the festival programme failed to include a timetable) notifies us that Coalition is at capacity. Bracing ourselves to reluctantly flaunt our press passes, we head down the slope to find no queues at all, and get in to see electronic banger-makers Klangstof without line-jumping any resentful punters (this time). It is busy inside, though, and the Dutch quartet are hammering away under a blaze of white light to an enthralled crowd. Their forcefulness catches us off guard, with even their more ethereal songs like ‘Hostage’ hitting the room at high volume, Koen Van de Wardt’s vocals soaring over heavy beats and gouging bass. (SH) The Amazons, Brighton Centre East Wing
Swaggering and melodic Reading rock upstarts The Amazons are the archetypal Great Escape band, returning to the coast with a BBC Sound Of 2017 nomination under their belts and a hotly anticipated debut album out in a matter of days. Even stepping up from last year’s Hope & Ruin slot to the decent capacity of the East Wing, it’s one in, one out already. Towering frontman Matt Thomson tears his lungs through ‘Little Something’, guitar pointing skywards in triumph as the band thunder along around him. Anthemic early single ‘Junk Food Forever’ closes The Amazons’ energetic show at its peak, summing up a band whose easily digestible indie will always satisfy the hunger of the festival crowd. Sod it, we’re off to Burger King. (SH) 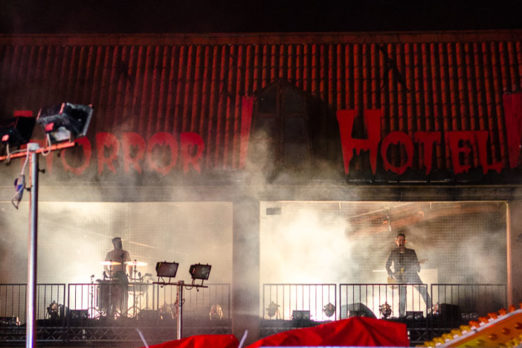 Slaves, Brighton Pier
We can confidently say this is the first gig we’ve ever seen on the Ghost Train at the end of Brighton Pier. Anticipation for Slaves’ headline set was high with eager fans queuing along the pier for over two hours. As the duo took to the stage on the ride’s top level balcony amid strobes and smoke, they brought in the noise amongst the heavy rain. But things got out of hand when more people managed to enter the fenced off standing area, with Slaves even stopping the set to ask everyone to move back. Fans that had paid were kept to the outer edges behind the barrier much to their massive frustration. Loud chants of “Let us in!” between songs eventually peaked as the small crowd broke through the barrier and barged past security. Tensions continued to rise and the gig stopped much earlier than expected. While many in the crowd clearly enjoyed it, others took to Twitter to make it known how pissed off they were about the whole thing. Slaves even issued an apology themselves, alluding to heavy handed security and fears of “structural collapse”. Another gig on the pier? Doubtful. (MT)

Alex Cameron, Komedia
The tall silhouette of Alex Cameron strides onto stage. He’s wearing a tan fringed jacket, and his long blond hair is slicked back. It’s a look that we like. Cameron is joined by his long-term musical partner Roy Molloy on horns, plus guitar and drums – moving away from the karaoke-style backing track the duo were touring with a few months ago. Theatrical yet candid, Cameron’s musical personas bring real emotion to the Komedia tonight, with tracks like ‘Take Care Of Business’, as he heartbreakingly sings: “I ain’t half the man I wanted to be”. Cameron is a character storyteller – listening to last year’s debut album ‘Jumping The Shark’, you soon release that he has an affinity for telling tales of washed-up glamour and faded dreams. Refreshing… (KS)

H. Hawkline, Unitarian Church
In need of a sit-down we opt for the calm of the Unitarian Church and established Welsh songwriter H. Hawkline. With just his chair and guitar, the man also known (from his S4C presenting days) as Huw Evans is an engaging performer even as his gently amusing banter threatens to deliver us too much information about the pus oozing from his finger (the result of an unfortunate encounter in the Lake District with the world’s sharpest breadknife, apparently). Delicate songs from forthcoming album ‘I Romanticize’ are interspersed with more familiar fare (‘Everybody’s On The Line’, ‘Spooky Dog’) before Hawkline ups sticks to join Aldous Harding on piano (“I really can’t play piano”) down the road. (SH) 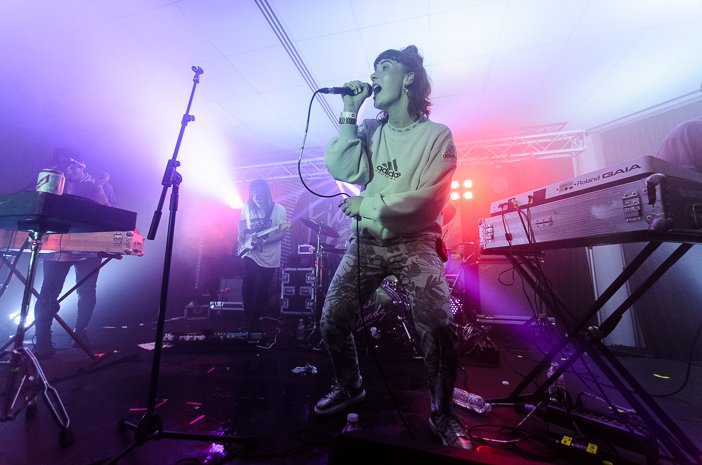 Fickle Friends, Brighton Centre East Wing
You could tell Fickle Friends were excited about this show, and not just because we saw them doing a pre-gig happy dance off the side of the stage. They hadn’t played a hometown date in 18 months which meant their Brighton fanbase were out in force for their headline slot. The joy is contagious as vocalist Natti dances across the stage bathed in coloured light, backed by synths, beats and glorious pop hooks. New single ‘Hello Hello’ sounds bright and fresh while their breakthrough single ‘Cry Baby’ is sung right back at them from the crowd. As they close with debut hit ‘Swim’ you can see why there’s been so much anticipation building for their first album. (MT) 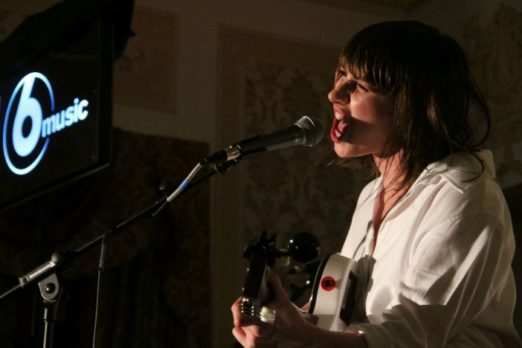 Aldous Harding, Paganini Ballroom
Aldous Harding is a New Zealand alt-folk songstress who was back in Brighton for her third successive Great Escape, which may be some sort of record. The beautiful Paganini Ballroom was packed out for her late show on the back of some rave reviews for new album ‘Party’ which was released the following day. Harding has a reputation for being a challenging performer and purveyor of some genuinely scary singing facial expressions, but this was a warm and moving performance – part sensitive soul, part torch singer. In spite of audience requests, she refused to play songs from her first album and concentrated on the new one, including an a cappella ‘What If Birds Aren’t Singing, They’re Screaming’ and the incredible title track ‘Party’ while ending the set with the album’s stunning lead video song ‘Horizon’. Also worth a mention was H Hawkline, who had come from his own gig to accompany her on some of her songs. Despite it being after midnight the audience refused to move when the lights came up so Aldous returned for a final encore. Stunning. (JS)

The SOURCE team covered all three days of The Great Escape 2017.
Check out our reviews from Friday and Saturday.
We’ve also got a review of the Alternative Escape here.

Sometimes an article is a bit of a team effort, and those are tagged SOURCE Writers. If you’d like to be part of that team, hit the Contact link at the top and get your work on this website.
← PREVIOUS POST
The Alt-Escape 2017 Review
NEXT POST →
Elli Ingram Photos
Mailing List
Recent Posts
Website developed in Brighton by Infobo
Copyright © Brighton Source 2009-2021
The Great Escape 2017 Review (Thur) - Brighton Source