Hutch are a sprightly five-piece with a flair for soft psych, twang pop, and post yacht rock, making their strident way through the scene following a Glastonbury longlist and a notable debut just eight months ago. They’re a Brighton staple, commanding the stage with decidedly upbeat and whimsical music.

On this crisp April evening at The Pipeline, lead singer and guitarist Jack Pritchard laments snails, rainbows and buttercups. He’s accompanied by a wistful Dan Shepherd on guitar, a pensive Charlie Bogg on bass, a contemplative Owen Bullock on drums, and a celestial Eva Lunny on harp.

Supported by the dulcet tones of Dazychains and the country-esque lilt of Duskhouse, Hutch delivered an uplifting night with admirable ease. It was a cosmic triptych line-up of musicians sporting purpose and drive, reminding the crowd of the thriving music scene keeping time on the south coast.

This sell-out Brighton headline marks the release of their first single, ‘Radiator Centre’, an energetic track recorded in an impressive live take at Echo Zoo Studios. Hutch might as well have whacked the heating on in The Pipeline, as they received a warm welcome from a crowd of expectant spectators armed with Hutch-stamped paper sunglasses and a hunger for new music.

Hutch bring a certain je n’ais ce quoi to the table; like taking a fork to a bowl of minestrone to chomp the broth-soaked veg. The audience wanted every last morsel, calling for a raucous encore of the local favourite ‘Sand Worms’. A loyal fanbase sang back the lyrics to ‘Mechanical Bull’ sung by Dan: “I don’t know why you try so hard”, an apt ode to a seemingly effortless performance, preceded by newly penned coastal interlude ‘Taking Your Time’.

Their experimentation was polished and precise, a chaotic 70s revival met with a fresh and peppy new perspective. Structurally sophisticated and melodically refined, Hutch performed with a firm grasp on the depth of their instruments, with honey-like harmonies reaching an alarming crescendo, before descending into what they self describe as “whooping”.

We walked out The Pipeline with a pair of paper sunglasses, a signature Hutch t-shirt, and a spring in our step. This will be the first of many sell-out headlines for the quintet, mark our words. 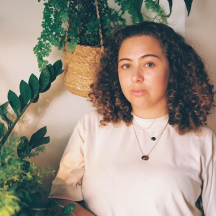 Elsa is a writer and broadcaster based in sunny Brighton.
← PREVIOUS POST
A day in the life of the Theatre Royal
NEXT POST →
Teenage Fanclub Review